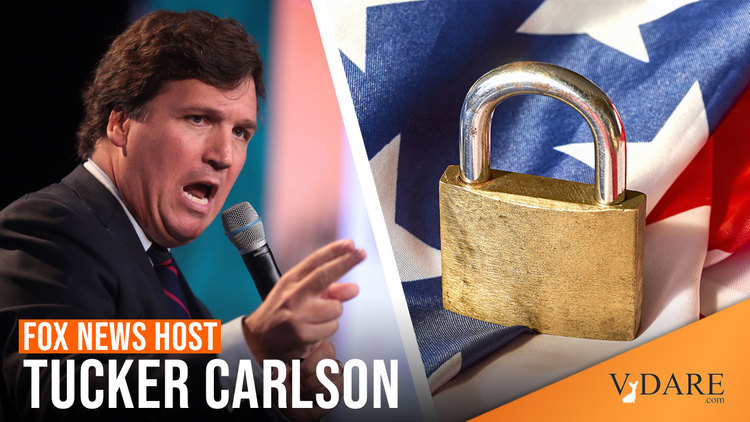 The great Tucker Carlson has called for an immigration moratorium

If our leaders truly wanted to unite the American people again, they would pause immigration. pic.twitter.com/MRl3fKpfRC

Of course, there was immediate pushback from pro-immigration forces within the Trump Administration, and it's been reversed by Biden, but all the reasons for an Immigration Moratorium still exist.

It’s 25 years to the month since I proposed an immigration moratorium in my book Alien Nation: Common Sense About America’s Immigration Disaster (you can see me explain the concept to NBC Today’s obviously dumbfounded Bryant Gumbel here) and 28 years since I first broached it in my 1992 National Review cover story that grew into Alien Nation. So I wasn’t unmoved to see a President of the United States finally adopt the idea on Monday night. Nor, again because it has been 25-28 years, am I particularly moved now to see the Executive Order promptly watered down by the usual suspects, savagely denounced by Fox News’ Tucker Carlson here....

There are 684 articles on VDARE.com discussing an immigration moratorium. A couple are from Alien Nation reviewers like Paul Glastris who said, "These disturbing trends can almost certainly be reversed without resorting to a "moratorium" on all immigrants, as Brimelow demands," and Jacob Weisberg, xenophobically wanting “an indefinite moratorium on right-wing Brits coming to tell us about threats to American values.” Some of them are false positives, referring to, say, Obama’s offshore drilling moratorium of ten years ago, but most are suggesting an immigration moratorium. There are 363 examples of the exact phrase “immigration moratorium” in our archives, and we have an “Immigration Moratorium” tag.

Last year we had this:

Let’s go back to the dawn of the Great Recession (caused, as you will have read on VDARE.com but not elsewhere, by the Minority Mortgage Meltdown) when unemployment soared to …half current levels.

Great Recession Unemployment actually sent some immigrants home (it’s cheaper to be unemployed in Mexico) and discouraged others from coming. But as soon as some jobs came back, so did illegals:

A number of different people have called for moratorium:

At the time Trump did this, someone did a poll, and it turns out that immigration restriction is always very popular with the American people...as we've also been saying for years: