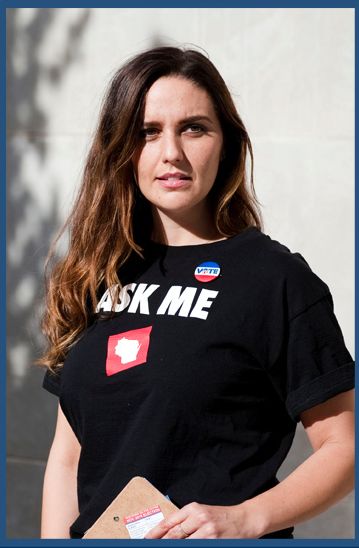 Molly McGrath (right) of the American Civil Liberties Union’s Voting Rights Project claims “voters are being disenfranchised” [Voters’ Rights Are In Peril, Experts Say, by Dave Fidlin, Urban Milwaukee, Nov. 24, 2017). What she really means: Voter ID laws are being adopted by an increasing number of states. Both Leftist activists and their allies in the Main Stream Media are desperate to avoid a secure voting system. But there’s an easy way to trump their objections: the U.S. should simply adopt the efficient and effective Mexican system for Voter ID.

Opponents of Voter ID such as McGrath and the ACLU say new voter ID laws make it harder to vote and have a “disproportionate impact” on minorities. The ACLU’s Oppose Voter ID Legislation - Fact Sheet argues Voter ID laws are designed to “roll back decades of progress on voting rights.” It makes such laws look downright evil:

Voter ID laws deprive many voters of their right to vote, reduce participation, and stand in direct opposition to our country’s trend of including more Americans in the democratic process. Many Americans do not have one of the forms of identification states acceptable for voting. These voters are disproportionately low-income, racial and ethnic minorities, the elderly, and people with disabilities.

Even providing free government voter cards wouldn’t solve the problem, according to the ACLU:

…such voters [the ones referred to above] more frequently have difficulty obtaining ID, because they cannot afford or cannot obtain the underlying documents that are a prerequisite to obtaining a government-issued photo ID card.

These arguments should sound familiar, as you hear them echoed constantly from the MSM and politicians. After the election, President Trump raised the issue of voter fraud and was widely denounced. The MSM and the Democrats are trying to sabotage Trump’s Presidential Commission on Election Integrity: Vice-Chairman Kris Kobach is under attack by the Leftist Citizens for Responsibility and Ethics in Washington for writing a Breitbart column about voter fraud and then introducing it for discussion at a commission meeting [Kris Kobach Hit With Ethics Complaint Over Side Gig As Paid Breitbart Columnist, by Sam Levine, Huffington Post, November 28, 2017.]

The argument some American citizens don’t have identification readily at hand is weak. Surely with the help of hospitals and government bureaucracies, citizenship ought to be verifiable. And naturalized American citizens should have their documentation anyway. As for non-citizens and illegals, they shouldn’t be voting anyway and can’t be “disenfranchised.”

Those who dismiss voter fraud as nonexistent often say hardly anyone is prosecuted for it. But that could be because few are even looking for it. Considering the haphazard nature of state voter registration systems, there is likely far more voter fraud than we’ve even heard about. 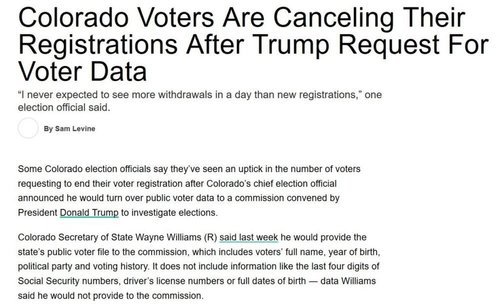 More than 5,300 Coloradans have withdrawn their voter registration over the past month, new figures from the Colorado Secretary of State’s Office showed …. as the office prepares to send voter roll information over to President Donald Trump’s election integrity commission.

Hmmm. Colorado getting ready to send voter roll info to the commission and suddenly, thousands of registered voters withdraw their registration. Why might that be?

Rowan Scarborough reported in the Washington Times [September 7, 2017] that More than 5,000 out-of-state voters may have tipped New Hampshire against Trump.” New Hampshire has same-day voter registration.

[m]ore than 6,500 people registered to vote in New Hampshire on Nov. 8 using out-of-state driver’s licenses, and since then the vast majority have neither obtained an in-state license nor registered a motor vehicle.

Cortes, by the way, “resigned without explanation” in 2017.

ALABAMA (and other states):

Lowndes County AL “has been accused of having 131 percent of its total eligible population on its list of registered voters.” Eleven other counties in Alabama have the same problem. According to the Public Interest Legal Foundation, many other states have such counties: Kentucky (41), Michigan (32), Iowa (31), Illinois (22) Mississippi (19). [Fraud? 248 counties have more voters than eligible citizens, By Bob Unruh, WND, September 25, 2017]

Repercussions for these crimes do not occur often, but they do occur.

KANSAS: A Peruvian woman was deported for illegally voting in Kansas, despite claiming that she was misled when she got her driver’s license under the Motor Voter regime [Kansas Grandmother Deported for Voter Fraud Leaves U.S. in Tears, NBC, August 5, 2017]. Even assuming she was misled, she went on to vote twice.

TEXAS: Mexican legal permanent resident Rosa Ortega, who voted repeatedly in American elections, was arrested and is slated to be deported to Mexico after serving an eight-year sentence. Her defense lawyer says Ortega, who was brought to the US as an infant, didn’t know she couldn’t vote:

“She has a sixth-grade education. She didn’t know she wasn’t legal,” said Ms. Ortega’s lawyer, Clark Birdsall, who once oversaw voter fraud prosecutions in neighboring Dallas County. “She can own property; she can serve in the military; she can get a job; she can pay taxes. But she can’t vote, and she didn’t know that.”

There’s a Fake News version of this story floating around, calling Ortega an "illegal who bragged about voting for Hillary 5 Times" , and a Snopes debunking, but the truth is bad enough. How many people are there— “DREAMers”, semi-literate legal residents, etc.—who don’t know they can’t vote? The point: at present, the system doesn’t even try to stop them.

Of course, there’s a solution. Mexico has an excellent secure Voter ID system.

President Donald Trump signed today an executive order to create a commission that will examine electoral fraud in the United States, despite the fact that there exists no information that supports such a claim.

The very next paragraph reads:

The commission…will have the responsibility to also examine the suppression of the vote, which has been identified as a recurrent phenomenon in zones with a high presence of voters of the black race and other minorities.

Thus Excelsior simply repeats the American MSM line party line that (1) there is virtually no electoral fraud in the U.S. but that (2) minority votes are suppressed.

Regardless of what Mexican journalists say, I’ve urged we should adopt Mexico's system since 2003, when I was living there.

The government of Mexico simply provides voter ID cards (with photos) to all Mexican voters. This is what it looks like: 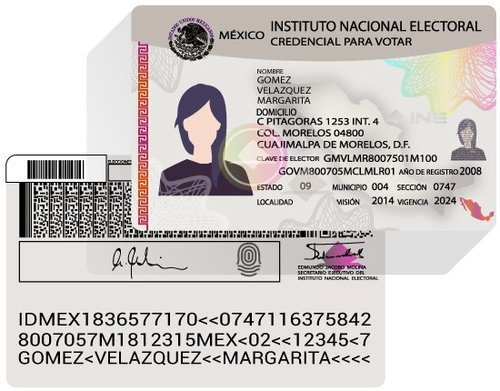 In order to obtain this voter ID card, a Mexican citizen must prove his citizenship.

Naturalized Mexicans (it’s not easy to be naturalized in Mexico) must provide their naturalization documentation. Besides proof of citizenship, applicants must provide proof of address with a document less than three months old.

The photo on the card is taken by the Mexican government. So no-one can whine that “I can’t afford a photograph”.

My wife is a Mexican citizen and I've accompanied her when she votes. (I hasten to add that, being a non-citizen of Mexico, I’ve never voted there).

The Mexican voter ID is also difficult to counterfeit. It features a photograph, fingerprint, and a holographic image to prevent counterfeiting.

The Mexican government goes even further to prevent fraudulent voting. At every local Mexican polling station, there is a book containing the photograph of every voter in the precinct. This book is available to the poll workers and observers from various parties. They can look up the voter’s name and see if it matches the card and the person’s appearance.

The Mexican voter's thumb is also smudged with ink. That way, if he shows up at another polling site to vote, they know he's already voted elsewhere. (The ink wears off after a few days.)

Below, then-candidate, now-President Pena Nieto displays  his thumbs in an election eve photograph:

Why not learn from something Mexico is doing right?

The usual suspects in the U.S. would fight this tooth and nail. But I believe that most American voters would agree with the use of such a system.

And if the critics complain, you can just say: “Why, are you prejudiced against the Mexican voter registration system? Are you some kind of racist?”