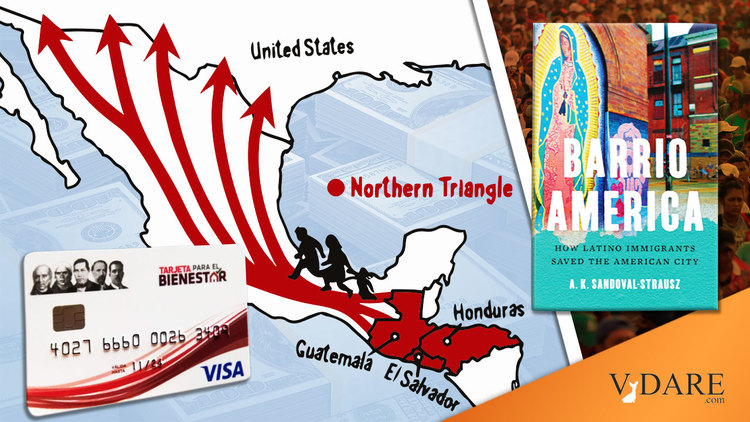 In recent years, illegal entries by Mexicans decreased even as illegal entries by Central Americans massively increased. In fact, as U.S. Customs and Border Protection reported in 2019, 70 percent of the illegals apprehended at our southern border were from the Northern Triangle of Honduras, Guatemala, and El Salvador [Press Briefing—CBP Release Fiscal Year 2019 Migration Stats, U.S. Customs and Border Protection, March 5, 2019].

That led to a remarkable convergence when President Trump persuaded Mexico to crack down harder on illegals passing through its territory, which resulted in fewer arriving to our border…until the Biden Rush began.

Still, Mexican emigration to the U.S. never ended, and appears to be increasing now for two reasons: poverty and crime:

Migration of misery continues in Mexico: economic shortage, lack of employment, stagnant local economies and conditions of food poverty in the five poorest states of the country pushed at least 419,000 Mexicans to migrate to the United States in the last five years. That’s 27% of the 1.5 million Mexicans from all over the country who, for various reasons, have migrated to that nation in that period, according to the National Population Council.

The five poorest states in Mexico—Veracruz, Puebla, Guerrero, Oaxaca and Chiapas, all with large Indian populations—are “some of the principal expellers of migrants in the past half decade,” Milenio’s Lopez reported. The concept of “migrant expulsion” is often used in the Mexican media and by politicians to describe emigration.

[O]ther states with good economic performance, but a marked deterioration in security conditions have also contributed to the Mexican migratory wave in recent years.

Picturesque Guanajuato, which I have visited several times, is the home state of former President Vicente Fox. Traditionally a popular tourist destination, Guanajuato has been suffering a major crime wave and increase in violence in recent years. Warring gangs have given it the country’s highest murder rate.

That murder rate is coming to America. And if Mexican emigration to the U.S. increases, the Mexican government will continue meddling in U.S. politics.

Crime Against “Migrants” Increasing In Mexico

Unsurprisingly, all those Central Americans traveling through Mexico to jump the U.S. border are targets of opportunity for murderous Mexican gangs and smugglers.

Thus, though the Mexican government reported that federal crimes decreased 11.7 percent from January through March this calendar year, and murder in particular had dropped 4.6 percent, crimes against “migrants” jumped dramatically:

Crimes against migrants shot up 70% during the first trimester of 2021 in comparison with the same period the previous year. From January to March of this year, the Secretariat of Security and Citizen Protection (SSPC) reported 357 crimes, in contrast to the 210 of January-March of 2020.

For years, remittances have been a key source of revenue for the Mexican government. The more money Mexicans living here send home, the more of that money circulates through the Mexican economy.

Now, the Mexican government has made such transfers more convenient:

Arthur Herrera, Secretary of the Treasury, began the delivery of debit cards of the Bank of Well-Being for migrants, so they can send their remittances through this program to their relatives in Mexico at a competitive price.

Herrera even went to Chicago to kick off the program and explain how important remittances are:

In a conference with representatives of the Mexican community in Chicago, Herrera recognized the importance of remittances for the country, given that during 2020, the amount of remittances entering Mexico was over $40.6 billion … these payments surpassed income for petroleum exports and tourism. ...

Sandra Morales, who is in charge of financial inclusion in the Bank of Well-Being, explained that the Debit-Account Express is an account that can be opened remotely through the Internet, that is, without the necessity of being in Mexico, utilizing the consular card or a passport as official identification, while credit cards are used for payment in the consulate.

The cards were tested in a pilot program that involved four consulates, and it’s going so smoothly in the United States that Mexico will soon expand it to Canada, Europe, and Latin America.

Soon the whole world will be sending money to Mexico!

Conquistador-American A.K. Sandoval-Strausz [Tweet him], a son of immigrants, a history professor and director of Latino studies at Penn State, has written a book, Barrio America: How Latino Immigrants Saved the American City.

It is, Amazon.com tells potential buyers, “The compelling history of how Latino immigrants revitalized the nation's cities after decades of disinvestment and white flight.”

Why, Lissardy wanted to know, did American cities need saving?

In essence, due to a combination of deindustrialization and racial prejudice, many Anglo-Saxons especially, white people, were moving from the cities to the suburbs. This left the cities without enough people, jobs and businesses to survive economically. For example, there were cities such as Chicago and Detroit which lost a third of their population between 1950 and 1980.

Whites were, of course, also running from black crime. And count me doubtful about Sandoval-Strausz’s population vs. jobs equation.

Anyway, all those “migrants” buying houses, and occupying businesses, schools, and “vacant churches … permitted these neighborhoods to return to life.” 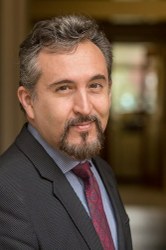 Sandoval-Strausz (pictured right) also offered the old saw that all those “migrants” do the jobs Americans won’t do in child care, construction, restaurants, and buildings maintenance: “[W]ithout these jobs, the cities simply would not function.”

The good professor also claimed that 25 million people would not be living in those cities “if those Latinos had not arrived,” which means absolutely nothing, and offered the usual factoids about crime and the economy that the Treason Lobby has been peddling years: “Trump lies about everything”; Hispanic neighborhoods have less crime than white neighborhood; Amnesty for 11 million illegals is a great idea; and the U.S. needs to import 350,000 people every year to keep the economy going.

The claim that the United States “needs” mass immigration from the Third World to thrive and even survive is one of the more annoying and grating refrains we frequently hear from his type.

The America in which I grew up was thriving long before the Immigration and Nationality Act of 1965 reordered U.S. immigration policy and invited millions from the Third World to claim squatter’s rights.

If our Conquistador-American professor would like a history lesson, I’m available.