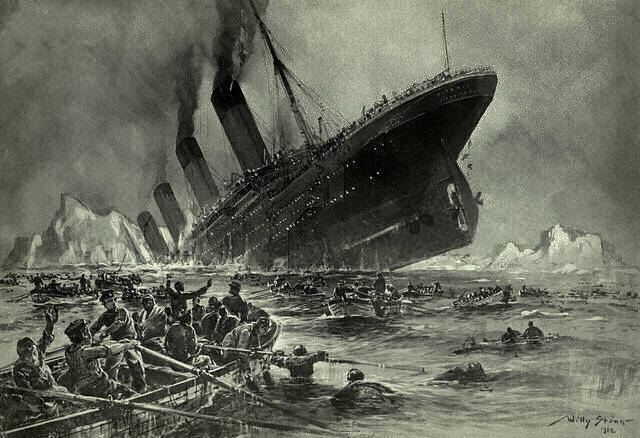 Exactly one hundred years ago, April 15th, 1912, RMS Titanic sank in the North Atlantic. The tragic and fascinating story of Titanic has captivated the public for a century.

The centennial is being commemorated in various ways. My family and I recently visited an excellent Titanic museum located in Branson, Missouri. (See here and here.) It was definitely worth seeing. There are other Titanic museums, including one in Belfast at the old location of the Harland and Wolff shipyard, where the magnificent but ill-fated vessel was constructed. 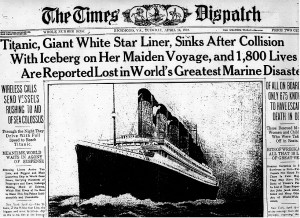 The Titanic story could be a Shakespearean tragedy—about a magnificent, state-of the-art vessel, the world’s largest at that time, on its maiden voyage, bearing representatives of the British and American upper crust. Tragic flaws, however, brought the ship through a danger area at too high a speed. Her collision with an iceberg brought her down, with over 1500 deaths.

Then there were the lifeboats. The crew had never conducted a lifeboat drill, there were only enough lifeboats for half the people on board, and even the lifeboats they did have were not filled to capacity.

There is just so much in the Titanic story—the technical aspects of the sinking, the overconfidence, the tragedy of so many lives lost, the stories of heroism and sacrifice.

In retrospect, the Titanic sinking took place near the end of an era. Just a couple of years later, the disastrous Great War changed the course of Western Civilization, forever and arguably fatally.

John R. Henderson of Ithaca College has done some good work on the demographics of those on the Titanic (see here). Among passengers the British, at 327, formed the largest group, with Americans second at 306, followed by the Irish (120), Swedes (113), Finns (59), Austro-Hungarians (49) and Syrians (81). There was one Mexican on board Titanic, a first class passenger and politician, Manuel Uruchurtu, who perished after giving up his seat on a lifeboat for an English lady.

Indicative of that era of rampant sexism, 72% of the women survived, but only 19% of the men.

Here at VDARE.COM we’re interested in the immigration/National Question angle on all this. And there certainly is one. After all, the Titanic disaster was in 1912, during the Great Wave of immigration, from the 1880s to the 1920s. This is the classic era of immigration, which established the way many people think about immigration even today.

The Titanic,  like other ocean liners of the time was an immigrant-bearing vessel. In fact, most of the Third Class (= steerage) passengers were immigrants, and many in Second Class as well. And they weren’t exactly traveling in misery. Although steerage accommodations were not as luxurious as First Class, or even Second Class, Third Class on Titanic was very good for its time.

The James Cameron Titanic movie portrays the Third Class passengers being locked below. An employee at the Titanic museum explained to me, however, that the ship was segregated by class from the beginning of the voyage. There were passageways for Third Class passengers to get up on deck, but the limited English of many of them impeded their doing so. Once again, the poor handling of the lifeboats, and the failure to have enough, was the major problem.

The inspection of arriving immigrants at Ellis Island is well-known. But the inspection of immigrants actually began on the other side of the pond. In the case of Titanic, it set sail from Southampton, England, stopped at Cherbourg, France and then Queenstown, Ireland, before heading out over the Atlantic. All the immigrants who boarded in those three ports were inspected upon boarding.

According to information provided on the Titanic & Nautical Research Center:

…immigration laws required ship companies to produce detailed lists of all passengers, a process designed to identify and then prevent the admission of aliens “likely to become a public charge” or otherwise barred from entry under U.S. law. In this case, the obvious fear was that the ship's owner was not going to be able to produce the passenger lists required by immigration law and that foreign passenger-survivors – mainly immigrants coming to the United States – might not be able to prove that they were not likely to become a public charge. In addition, some people worried that many might be sick or injured and therefore potentially excludable on medical grounds.  [RMS Titanic Immigration, information from a now defunct U.S. Citizenship and Immigration Services webpage.]

These shipping companies had good incentives to cooperate with U.S. immigration authorities—because…..

Under U.S. law, ships were responsible for ensuring that all non-U.S. citizens arriving in an U.S. port of entry (such as New York City) were admissible under U.S. law. If they were not, the passenger could be excluded from entering the U.S., the ship company could be fined and then required to take the person back at its own expense.

So the companies were very careful about complying with U.S. immigration law:

To protect themselves, ship companies completed immigration forms using information provided by passengers as they purchased their tickets, and on the forms recorded answers to “a long list of questions taken from immigration law. Alien passenger records contained their name, age, sex, marital status, occupation, nationality, last permanent residence, destination, names and addresses of friends or relatives at both the past permanent residence and destination, place of birth, and answers to legal questions such as ‘Are you a polygamist?' [AW: Sounds like an appropriate question for some of today’s Muslim immigrants!] These documents, the passenger manifests, were then certified by a U.S. Consul prior to embarkation from the foreign port and delivered to U.S. immigration authorities upon arrival.

The company also had to pay a tax for each immigrant and could be fined for infractions.

So the shipping company, regardless of nationality, cooperated with the local U.S. Consul to comply with U.S. immigration law. The lines had strong incentives to carry only qualified immigrants.

After the Titanic sank, its survivors were picked up by the Carpathia, which brought them to New York. But even then, the Titanic survivors still had to go through an immigration inspection.

True, the U.S. authorities did cut them some slack. According to the USCIS, Daniel J. Keefe, Commissioner-General of Immigration, instructed William Williams, the Immigration Service’s New York Commissioner of Immigration, to “construe our [immigration] laws as liberally as possible” when dealing with the Titanic survivors.

However, this was “liberally as possible” by 1912 standards—not today’s. Really, what Keefe was referring to was the simple fact that the Titanic’s passenger lists were lying at the bottom of the Atlantic Ocean.

Titanic belonged to the White Star Line. Carpathia was of the rival Cunard line (the two later merged). Nevertheless, the rules for immigrants were the same. Therefore, as Carpathia steamed towards New York with the Titanic survivors aboard, the ship’s purser was feverishly attempting to draw up a new manifest to present to U.S. immigration authorities. They drew up a list of the survivors and interviewed them.

But even the White Star Line was concerned about the issue, and a scant few hours after the Titanic went down, the company’s counsel contacted the Commissioner- General of Immigration in the U.S., requesting “special arrangements” and to “extend such special facilities as are necessary.”

It’s interesting to note that back in 1912, even non-American companies respected U.S. immigration law.

When the Carpathia arrived, however, many of the Titanic survivors were not in great condition, and so they were taken to hospitals and other places. But even the 100 who were taken to St. Vincent’s Hospital were inspected. One survivor, who’d been in second class, reported that “There seemed to be no end to the questions we had to answer.”

The case of the Chinese was special. The Titanic’s six surviving Chinese sailors (out of 8), were covered by the Chinese Exclusion Act, They were transferred to work on a British ship and they headed back to the other side of the Atlantic.

It’s interesting that, even in the wake of the Titanic disaster, U.S. immigration officials were still trying to enforce the law. Of course they did take into account the special situation of the Titanic survivors and were able to help them. But the laws didn’t go out the window.

Nowadays though, our whole immigration system seems to be based upon exceptions and outright lawbreaking, encouraged from the very top. We’re told that everybody that has entered the U.S. illegally has to get an amnesty. We’re told that Central Americans need amnesties because they have hurricanes and volcanoes in their countries, etc. Our immigration authorities regularly release illegal aliens. The Obama Administration is blatantly determined to deport as few illegal aliens as possible.

And of course, nobody in the political mainstream has any plans to reduce legal immigration.

Besides its enduring historical interest, might not the Titanic’s memory also serve as a warning to our country—which continues to steam ahead into a danger zone, heading for disaster?