See also: David Yeagley, R. I. P.,  and Dr. Yeagley’s last article for VDARE.com: A Comanche On The Fear Of A White Planet 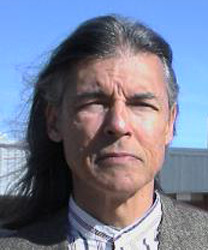 It was my privilege to meet my fellow VDARE.com contributor, Dr. David Yeagley, just a few months before his death. Put in touch by VDARE.com Editor Peter Brimelow, my wife, our two sons and I visited him in his Oklahoma City home the day before Thanksgiving, 2013. We wound up staying five hours, conversing the entire time, with Dr. Yeagley holding forth on various and sundry topics. It was truly enjoyable.

Dr. Yeagley told us about his early life and education, and explained how he had never married because of his health problems. We discussed the then-pending lawsuit against those who had shut down two American Renaissance conferences. (He won it in January).

Much of the discussion centered around Indian-related topics, mostly Comanche but also about Indians in particular and the Indian tribe from my home town. He told us about his ancestor Bad Eagle and the time Bad Eagle and his family spent in Mexico. He talked about his view of the American Indian’s role in the American nation’s history and possibly in the future. We discussed the general admiration and respect for the American Indian in American society.

We discussed the Bible—Dr. Yeagley was a devout Christian, an elder in the Seventh Day Adventist Church. We talked a little about agriculture. Dr. Yeagley said he’d like to visit us and go hunting with the boys. Alas, that was never to be. But the day we visited, he seemed to be feeling good and to be in good spirits.

Born in 1951 in Oklahoma City, David Yeagley was, as he himself described it, a “Breed”, or half-breed, the son of a white father and Comanche mother. He never tried to hide that fact. Among American Indians, and particularly Oklahoma Indians, that’s not uncommon at all. Historically, many prominent Indians have not been full-bloods. But he strongly identified with his Comanche background.

Dr. Yeagley’s accomplishments were many and varied. He was both versatile and prolific. In the educational field, he had several degrees including a Doctorate of Musical Arts  from the University of Arizona.

His was a natural musical talent, both as a musician and a composer. Just recently, he was chosen to write the symphonic score for the recently unearthed Daughter of Dawn, a 1920 silent movie filmed in Oklahoma’s Wichita Mountains with an all-Indian cast.

Yeagley wrote fiction and non-fiction, essays, articles and books. Of course there were the Indian-related topics, the National Question, Oklahoma politics, patriotism, Biblical commentary, his admiration for the Jews and Persians, and warnings of the Islamic Threat. In addition, he posted 153 YouTube videos. You can see him being interviewed, in a History Channel documentary on Comanche Warriors.

Yeagley was a candidate for tribal chairman of the Comanche tribe in 2012, and he also drafted and proposed a new constitution for the tribe.

One of David Yeagley’s many concerns was the state of American Indian youth, seeking to instill in them a more positive outlook than that provided by the liberal victimization mentality. During our visit, I shared with Dr. Yeagley a story from my Oklahoma community—in my old high school, American Indian students were popular and well-liked, and were good athletes. But one of our school’s graduates went to the University of Oklahoma, where he soon learned how horribly treated he had been all those years. It was an example of the poisonous effect of anti-white indoctrination.

Yeagley saw no contradiction in defending the historical American nation, the traditional white majority of the U.S., against mass immigration and multiculturalism. This explains many of his articles on VDARE and his well-received speeches at the American Renaissance conference. American Renaissance  Editor Jared Taylor has a heartfelt piece on Yeagley here: Good Bye, Older Brother.

Most white Americans live in abject fear of ever being called “racist” and will not fight against their own dispossession. But David Yeagley correctly saw that the destiny of the American Indian is linked to that of the historical American nation, and he wasn’t afraid to speak out.

This of course attracted a lot of opposition. In fact, there were even a few websites specifically set up to combat David Yeagley, including obvious saboteurs like DavidYeagley.org and  BadEagle, org.

The tolerant folks over at One People’s Project, the website of the group which he successfully sued over the American Renaissance conference cancellation, unsubtly entitled an article about Yeagley’s death with

Then there was an article about Daryle Lamont Jenkins (pictured right) on the Metro news website for Philadelphia: 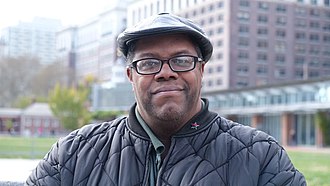 Philly activist ready to celebrate after death of Midwest racist who won $50K lawsuit against him. [By Sam Newhouse, March 16, 2014]

There’s some real tolerance for you.

I first learned of David Yeagley back in 2001, when he began to write on FrontPageMagazine.com. His famous article I Was Fired For Being a Conservative Indian was about his experience at the Oklahoma City branch of my alma mater, Oklahoma State University.

Another early Yeagley contribution to FrontPageMag: the powerful 2001 article “Don’t Burn my Flag” where he discussed the traditional respect for the flag among American Indians, contrasting it with “Aztlan” protestors in California burning an American flag. It includes a humorous account of a trip Yeagley and other American Indians took to Mexico in 1993 and a putdown of the “Aztlan” movement. He declared:

If push comes to shove, I’ll be standing with the Anglos this time. One thing whites and Indians have in common: We respect the American flag.

I believe Yeagley was right about that. If whites become a minority, the status of the American Indian will be significantly lowered. The Anglo-American has a history and a relationship with the American Indian. Why would Hispanics, Asians etc. have that same respect?

Back in 2002, in his very first VDARE.COM article, An American Indian View of Immigration, Dr. Yeagley explained, in his own unique and eloquent manner, why he valued the bond between the American Indian and the historical American nation.

The demographic destruction of Anglo-America will bring the final catastrophe on our people.

What catastrophe? The catastrophe of waking up one day and realizing that white people no longer control this country.

Now why should an Indian care about that? After all, white people are supposedly our enemies.

Well, yes, they were. But, as warriors, we found them to be worthy and formidable adversaries. Defeat is bitter. But when you respect your conqueror, it is a lot easier to swallow.

If Anglo-America turns this land over to blacks, Mexicans, Asians, Middle Easterners and other foreign peoples, for the Indian, it will be like losing this country for the second time. We have had generations to reconcile ourselves to white America. But we do not know these new people who are coming. We fought no battles with them, made no treaties with them, and have no reason to accord them any special respect

We Indians—especially the more warlike tribes such as my people the Comanches—recognize a kindred spirit in the White Anglo-Saxon Protestant. He is like us in more ways than he knows.

…In many ways, Indians see the white man as a kind of adopted son—naïve, reckless and destructive, at times—but nevertheless cut from the same warrior cloth as we were.

We do not see blacks, Mexicans, Asians, Arabs and others in this light. These peoples may have their own virtues and traditions, but they have no history with us. They are strangers.

If they want to rule us, they must conquer us the way the white man did—on the battlefield, by force of arms. That is the only honorable way for a warrior.

The white man seems to have lost his spirit, and we Indians see it. We see that he is giving this country away to others. And this fills our hearts with fear. For we are part of the land he is giving away. He is turning us over to strangers the way medieval barons turned over their serfs when they sold their land.

But we are not serfs. We are warriors. And we will not be ruled by people who have never fought us.

The white man must regain his warrior soul and take back his land.

In that fight, I will stand by his side and offer whatever strength I have to ensure his victory. Ha tu vi chat! *

We honor his gifts and how he used them, his courage and his love of country.

May we further honor his memory by continuing the defense of the besieged American nation.