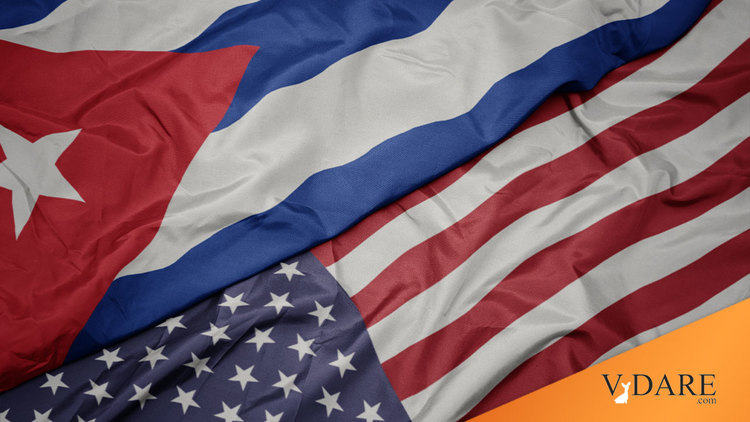 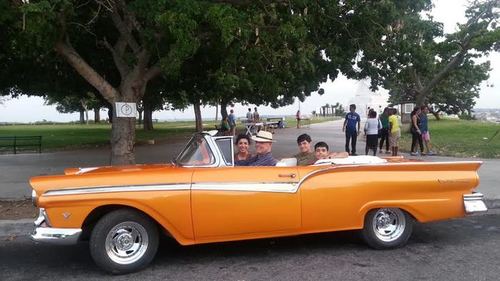 Lilia, Allan, David and Raphael Wall in a '57 Ford Fairlane Convertible in Havana.

In his post-election ruling-by-decree spasm, President Obama has “thrown Fidel a rope” by announcing normalization of relations with Cuba, prompting speculation that we’ll see a large increase of American economic investment and tourism into the country [For U.S. businesses and tourists, opportunities abound in Cuba, by Karen DeYoung and Carol Morello, Washington Post, December 18, 2014].   How will Cuba’s national identity survive such a radical economic and cultural change—and what does the Cuban experience tell us about the National Question in America?

Americans are currently forbidden to visit Cuba as tourists, but they can go for educational, cultural, scientific or religious reasons. (And Cuban-Americans have special rights to visit relatives).

This past summer, my family and I spent a week in Cuba under the religious exception, on a mission for our local church.   For years, our church has sent money to a Cuban preacher, but nobody had been there. Cuba now allows more religious freedom than in the past, but Christians can still get into trouble if it’s perceived they oppose the regime.

The island of Cuba is certainly beautiful, as Christopher Columbus pointed out in 1492 when he wrote that it was La Tierra Más Hermosa Que Ojos Humanos Hayan Visto (“the most beautiful land that human eyes have ever seen.”) The soil is very fertile and able to be used for Western-style agriculture, not always the case in the tropics. I saw fields of maize, sugar, rice and bananas.

The old Spanish structures in Havana were in good shape. Many more recent buildings had a run-down look but you could tell they had once been elegant. We found the Cuban people to be very friendly. When they knew I was American, they were even friendlier.

Cuba naturally shares some cultural similarities with Mexico, given the two countries’ common Spanish heritage. But there are some critical differences.

Racially, most of Mexico’s population is either European or Indian, with the mestizo majority in the middle. Cuba has a larger spectrum of racial diversity, with whites, blacks, and many mixed-race persons with various combinations of European, African and American Indian blood. It should be noted that the Castro Brothers Fidel and Raul, in power since Eisenhower was U.S. president, are Euro- Cubans. I had some difficulty with the Cuban dialect of Spanish, as I'm more accustomed to the Mexican dialect of Spanish, but I was able to communicate.

The cuisines are quite different. Cubans don’t eat tortillas or chili. Pork is the principal meat—almost no beef is eaten despite the fact that there are cattle grazing all over the island, as cattle are strictly controlled by the government.

As you might expect, communist propaganda is everywhere, though it was hard to tell if people take it seriously. Some slogans included:   Venceremos (“We are victorious”), La Revolución Es Una Hermosa y Indestructible Realidad (“The Revolution is a beautiful and indestructible reality”), Si no Producimos no Podemos Avanzar, (“If we Don’t Produce, We Can’t Advance”), El Día Que No Haya Combate Será un Día Perdido (“The Day Without Combat will be a Lost Day”), and Nuestro Mejor Amigo (“Our Best Friend”) which bore photographic likenesses of Fidel and Hugo Chavez.

Another slogan was La Batalla Economica, Tarea Principal (“The Economic Battle, the Principal Task”) …which I saw on a horsecart.

The regime blames its economic failure on the U.S. embargo.   I saw a sign that called the embargo the genocidio mas largo de la historia (“the longest genocide of history”). This is ironic because in the 1950s Americans were criticized for investing too much in Cuba. Now Americans are criticized for not investing enough.

Of course, the real reason the economy is a disaster is the communist system. We noticed an acute scarcity of consumer goods. Neither homes nor stores had much to offer. In Mexico, mom and pop stores can be found even in poorer neighborhoods, where consumers can choose from a wide array of snacks and drinks. I saw nothing like that in Cuba.

We didn’t even see much trash on the ground, whereas in Mexico there is trash all over the place.   After all, trash indicates a certain level of prosperity and consumption—you have to have it before you throw it away. In Cuba, it’s hard to even find a napkin in a restaurant.

One of the questions I had about Cuba was: how would the traditional Latin American disdain for the law mesh with totalitarian communist ideology?   The explanation: Cuban corruption is simply just channeled into the party bureaucracy.

A taxi driver showed us a slum in the capital city and then the palatial homes of communist party officials. To paraphrase Orwell, some Cubans are more equal than others.

Cuba is a great place to see classic American automobiles from the 1950s, and even earlier, being driven down the streets. Some are used as taxis. A half-century after the communist revolution, Cubans have kept these cars running. Ironically, a communist revolution enabled the mass preservation of these iconic symbols of 1950s American capitalism and manufacturing.

What’s most interesting about Cuba is the combination of fierce nationalism with ideological communism. Cuban immigration policies are strict. You can’t even get into the country without having previously purchased a health insurance policy. And in order to check into hotels, we had to show our passports.

Upon arrival at the airport, my wife’s luggage was available on the conveyor belt very quickly.   She carries a Mexican passport.   My sons and I, who carry U.S. passports, had to wait for our luggage. Our bags were searched before we even received them.

Although communism puts forth its own version of a “Proposition Nation”, culture matters even in a communist totalitarian state. The Castro regime successfully combined communist ideology with Cuban nationalism, a blend expressed in the omnipresent propaganda. One sign read   Socialismo o La Muerte (“Socialism or Death”) while another read Patria o Muerte (“the Fatherland or Death”). In the regime’s propaganda, there is no contradiction—support for Communism is support for the Cuban fatherland.

Cuban anti-Americanism is part of this. So is the exploitation of Jose Martí, a beloved Cuban poet and independence fighter, who died in the 19th century but who has been adopted by Communists as a sort of honorary Party member.

Fidel Castro himself displays many characteristics of the typically Latin American caudillo. He maintained relations with Argentina’s “right-wing” caudillo Juan Peron, proclaiming three days of mourning in Cuba upon Peron’s death in 1974. Fidel even maintained relations with Spain’s Francisco Franco, whose family came from the same part of Spain as Castro’s. This suggests a certain Hispanic cultural affinity that transcends ideology.

What I took away: Cuban identity is likely to survive even a mass American influx. Cuban culture seems able to survive any political or economic system.

But the threat to America´s identity is more systematic. After visiting the island, I think there may always be a Cuba—but it remains to be seen if there will always be a United States of America..