See also by Brenda Walker: Mexican Consulates In US Hold Citizenship Clinics so Immigrants Can Vote against Trump

For years I’ve been writing in VDARE.com about Mexican meddling in U.S. domestic policy. The Mexican government’s latest meddling strategy is so blatant that even some Mainstream Media outlets have noticed. 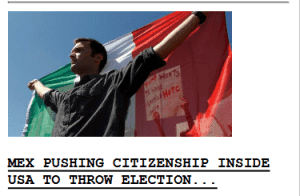 Now how about making it a major campaign issue?

Bloomberg recently reported that Mexican consulates on U.S. soil are hosting a public process aimed at the naturalization of Mexicans as U.S. citizens so they can vote in U.S. elections.  Guess who they want them to vote against?[ Stop Trump Movement Gets Boost From Mexico's Efforts in U.S., By Eric Martin and Nacha Cattan, Bloomberg, March 20/21, 2016]

And on March 21 The Drudge  Report picked it up: MEX PUSHING CITIZENSHIP INSIDE USA TO THROW ELECTION with a link to the Bloomberg piece.

Bravo! Matt Drudge gets it!

VDARE.com readers will recall that I wrote about this very thing in 2015, when the idea was still in the formative stage under the direction of Mexican Ambassador Basanez, who has specifically talked about how dual U.S.- Mexican citizens can vote in U.S. elections against Trump (See here and here

Once again, VDARE.COM gets there first!

Note what Bloomberg’s Martin and Cattan say about the blatant way Mexico is colonizing us:

Officially, Mexico says it respects U.S. sovereignty and has no strategy to influence the result of the presidential race. Yet Mexican diplomats are mobilizing for the first time to assist immigrants in gaining U.S. citizenship, hosting free workshops on naturalization.

That’s a tipoff: When a Mexican politician or diplomat says he respects U.S. sovereignty, it’s because he’s engaged in an activity that doesn’t respect our sovereignty.

Even the consulate spokesman recognized the historic nature of what is going on:

"This is a historic moment where the Mexican consulate will open its doors to carry out these types of events in favor of the Mexican community," Adrian Sosa, a spokesman for the consulate in Chicago, said before an event on March 19. In Dallas, about 250 permanent residents attended the consulate’s first "citizenship clinic" in February and another 150 in its second in March. In Las Vegas, the turnout topped 500.

Sosa obviously knows this is problematic:

Underscoring the fine line that separates participation from interfering in another country’s election, Sosa noted that the consulate only hosts the event but it’s community organizations who offer the advice.

These “community organizations” are in cahoots with a foreign power and should be investigated.

Can you imagine if a U.S. consulate in Mexico was hosting “events” to get American expatriates naturalized as Mexican citizens, so they could vote for American interests in Mexican elections?

This is despite the fact that the U.S. naturalization oath includes a specific renunciation of the new citizen’s former citizenship.

Recall too that in 1997, the Mexican government legalized dual citizenship expressly to use its emigrants meddle in our politics.

It’s an act of political and demographic warfare. And it’s not being carried out secretly, but publicly. They’re not even scared of being shut down—because Washington has allowed their meddling for years.

What if we had a government that respected and defended American sovereignty, it would shut down this operation and expel the diplomats involved.

Will we have such a government after the next election?

The Bloomberg duo try to personalize this outrage by quoting a sympathetic figure:

Joel Diaz doesn’t want to wait to see how it all turns out. The Mexican-American, who has been a permanent resident of the U.S. for six years, arrived at the Mexican consulate in Chicago on Saturday with his wife and four adult sons to register all of them as U.S. citizens in order to vote against Trump.

Wait a minute. Joel Diaz is clearly not a “Mexican-American.” He is a Mexican. He “has been a permanent resident of the U.S. for six years” which means he has a “green card” and is not a citizen and he was not born here.

Note too that Diaz clearly says he and his family are naturalizing specifically to defeat Trump—not because they have a burning desire to become Americans.

"We’re very worried," Diaz, 47, an evangelical pastor, said. "If he wins there will be a lot of damage against a lot of people here, and to us as Hispanics, as Mexicans."

An evangelical pastor, eh? As I’ve reported before, just because Hispanics are evangelicals doesn’t mean they are with us on the National Question.

And hey, does Diaz not think that he is lying when he takes a citizenship oath renouncing his Mexican citizenship when it’s obvious that what he really cares about is the Mexican community?

Of course, another Mexican diplomat tries to tell us Mexico is not meddling:

Laura Espinosa, deputy consul in Mexico’s consulate in Las Vegas, said the main goal of the program is citizenship, and while that includes the right to vote, the government doesn’t press people to do so. "Those who use this to vote, that’s up to each individual," said Espinosa, who confirmed that most consulates have begun citizenship campaigns. "We don’t have any opinion on that, because that would be totally interfering in internal affairs of the country." [Emphases added]

And of course, Martin and Cattan quote an American  academic:

Boosting turnout among immigrant voters could help tip the scale in the election, said Julian Zelizer, [Email him] a professor of history and public affairs at Princeton University. "Trump is exactly the kind of Republican who could mobilize legalized immigrant voters and others sympathetic to liberalized immigration policy," Zelizer said in an e-mailed response to questions. "This has been one issue where he has not been very vague and taking an extremely tough and aggressive stance. I suspect that if he was the nominee you could see very high turnout in certain states for Democrats as a result of this issue."

So how about a high turnout of American voters who don’t want their country to become a colony of Mexico?

And where is the GOP leadership?

Oh, that’s right.  The GOP Establishment is on the anti-Trump bandwagon too, along with the Mexican government.