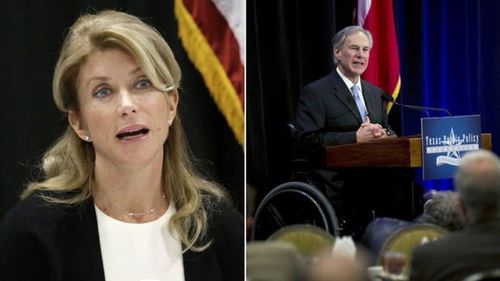 Both candidates in the race for Texas Governor, Republican Greg Abbott and Democrat Wendy Davis, are bowing to racial Balkanization. Both are running Spanish language ads that suggest Texas Hispanics have different collective interests than Anglos. Whoever wins the election, a critical point has been conceded: Texas is supposedly just a collection of racial tribes, rather than a real community.

Wendy Davis’s Spanish-language ads appeal to the Hispanics’ sense of impending takeover. This includes her October 23 ad entitled “Our Moment”. The “our” here refers to Texas Hispanics—not Texans as a whole. The ad tells viewers that Wendy Davis is a champion of “nuestra comunidad” because she too derives from “humble roots”. Davis completes the ad by speaking in Spanish, assuring viewers that “Somos familia, y como familia, logramos mas” ("We are family, and as family, we achieve more.”)

How about Greg Abbott’s bifurcated website? The English site has a picture of Abbott aiming a firearm, with an entry beneath entitled “Protecting the 2nd Amendment”. On the Spanish side though, the title is “Creando Escuelas Mas Seguras”—“Creating Safer Schools.”

Sure enough, polling indicates that most Hispanics do support gun control—meaning that Abbott has to tell Hispanics one thing and Anglos another.

And that’s just one example.

Compare the featured videos on Abbott’s website. On the English-language side of the house, the most recent videos are

Meanwhile, on the Spanish-language side, the Abbott website features these campaign videos: Eduardo Verastegui, featured in the Sep. 17 video linked above, is an actor and producer. Verastegui is an outspoken practicing Catholic and a true social conservative, an admirable and courageous individual who practices his faith and defends his principles in the show-biz world, which is not easy.

On the other hand, Verastegui is a Mexican-born dual citizen, a part of the growing transnational Hispanic identity that endangers the Historic American Nation. In the video, Verastegui speaks of “nuestras comunidades”—“our communities”—which must mean “Hispanic communities.”

And how about the “Greg Abbot Will Secure the Border” English-language video? Why isn’t that featured on the Spanish side? It’s as if Abbott wants to promote border control and gun rights to the Anglos and jobs, education and “values” to the Hispanics.

As for celebrity supporters, Abbot has Chuck Norris for the Anglos and Eduardo Verastegui for the Hispanics.

This isn’t new. Way back in 2002, I wrote “Nuestra Gente” And The National Question In Texas. Democratic gubernatorial candidate Tony Sanchez presented himself as a conservative Texan in English–language ads and as a Chicano activist in Spanish-language ads.

Abbott isn’t some bumbling conservative who has no idea how to talk to nonwhites. His wife is Mexican-American, the granddaughter of immigrants. If Abbott wins, Mrs. Abbott would be Texas’ first Hispanic First Lady. (This hasn’t stopped Davis from idiotically questioning if Abbott wants to ban interracial marriage.)

So if even Abbott seems unable to keep a consistent message when it comes to both Hispanics and Anglos, it bodes ill for the unity of the state and of the country.

Some might argue, “Well, so what, this is politics,” and so it is. But our common civic language has been a valuable asset for centuries. English is the language our country was founded upon in the 1600s. It’s the language of our Constitution, our laws and our political discourse. Why should we let its importance be eroded by the political use of Spanish?

Indeed, some justifications being offered imply that Texas simply needs to get used to no longer being part of the English-speaking world. "The future of Texas politics is so clearly Hispanic that both parties are looking in that direction," says Harvey Kronberg, editor of the Quorum Report. [Investigation breaks down TV ads in Texas 2014 elections, by Mark Wiggins, KVUE, September 25, 2014]

So when did Texans vote to become part of Mexico?

Look at it this way: If present trends continue the problem will correct itself-—they’ll eventually discontinue English-language ads in Texas.

I speak Spanish. I teach it in school. If I wanted to, I could profit off the use of Spanish in political campaigns—it’s a big business.

But it’s not right. Linguistic segregation is dividing our country and dispossessing the historic American nation.

But what about the rest of us? Do we have any say in the matter?

And if the Republican Party continues to support this transformation, does it make any sense for the Historic American Nation to continue voting for it?