President Trump made a start towards recasting the presidential race on July 4, but he needs to match his words with actions. The unhinged Main Stream Media response to what would have been considered patriotic banalities from any other president shows he has an opening to rally America against JournoFa and in defense of our heroes, history, and identity. But American identity is fragmenting because people are given specific incentives to disassociate from it. My view: Trump needs to run on a civic nationalist platform with three essential components: ending Affirmative Action racial privileges; immigration restriction; economic populism. A symbolic Culture War just won’t be enough.

Trump didn’t say anything revolutionary or especially right-wing in his July 4 address. It shows how beaten down American patriots are that so many reacted to it like a man in the desert would react to an oasis [Trump’s Independence Day Speech Was Not ‘Dark’ Or ‘Divisive,’ It Was American, by Margot Cleveland, The Federalist, July 6, 2020]. But contrast the way leading newspapers covered it:

What was so “dark” and “warlike” about Trump’s speech? Nothing. Brit Hume at Fox News has proclaimed it “utterly mystifying” that America’s leading newspapers and journalists found the speech so troubling. “I have rarely seen such biased and misleading coverage and such extravagant opinion reaction to this than I saw this weekend,” he said [Brit Hume: Why biased coverage of Trump’s Mount Rushmore speech ‘could be a turning point,’ by Talia Kaplan, Fox News, July 7, 2020].

Of course, this isn’t “mystifying” at all to us. There is a vast Diversity Industry that incentivizes people to not associate themselves with American history and identity. Consider Colin Kaepernick. He denounced July 4 as a “white supremacist” celebration. This was completely different from what he was tweeting just a few years ago [Colin Kaepernick mocked for tweet calling 4th of July ‘celebration of white supremacy, Fox6, July 6 2020]. 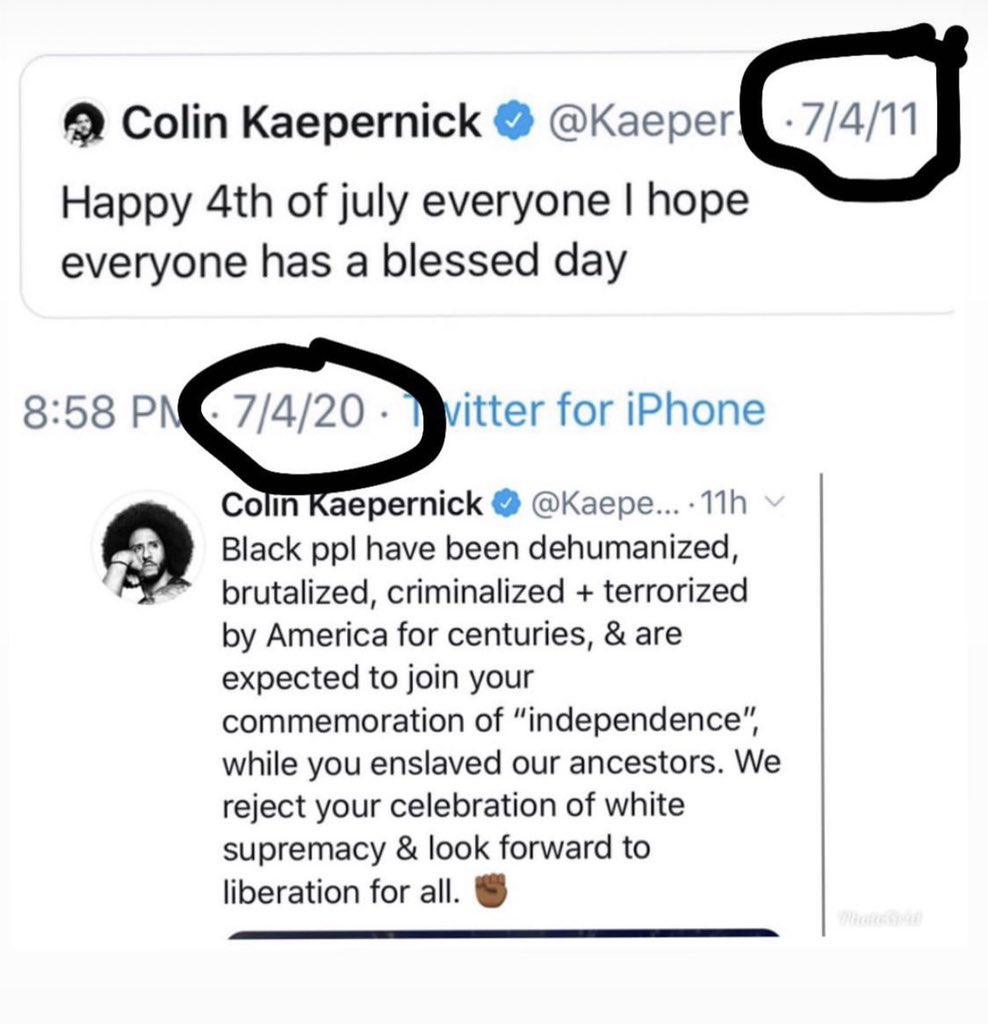 Has Kaepernick paid a price for this? No, he has not. Instead, he’s getting a fawning documentary from Disney, once the most mainstream “Americana” company that could possibly exist [Colin Kaepernick, Disney announce partnership deal, ESPN, July 6, 2020].

Conservatives can say that Americans need to stand up to Political Correctness or boycott companies that engage in such activities. However, the truth is that an individual boycott is going to make little difference. And, more important, any overt opposition to Black Lives Matter could endanger your job and even your physical safety.

Unlike murderers in Chicago and New York, or rioters who occupy police stations, white dissidents will feel the wrath of law enforcement if they as much as dare post an unapproved flyer in public.

Ronald Reagan famously described the government’s view of the economy. “If it moves, tax it,” he said. “If it keeps moving, regulate it. And if it stops moving, subsidize it.” In other words, conservatives understand that the state can create perverse incentives for destructive economic behavior through its policies.

But they should also realize the same is true about cultural policies. What is at the root of the destructive anti-American, anti-Christian, and anti-white movement rotting our country? State-sponsored discrimination against whites, i.e., Affirmative Action.

Government has created a powerful incentive for people to claim oppression. The reason we get Rachel Dolezal, Elizabeth Warren, and (possibly) Shaun King claiming at various points to be non-white is because they derive economic and social benefits from doing so. As Scott Greer pointed out in No Campus for White Men, Affirmative Action creates a vast market on college campuses for various ethnic studies programs which produce a huge supply of professional victims armed with an ideology of grievance. This has burst from the universities into the media and entertainment industry and now into the culture at large.

Affirmative Action is already a major issue this November. A constitutional amendment that will restore racial discrimination in hiring will be on the ballot in California [Affirmative Action Amendment Narrowly Passed by Senate, by Evan Symon, California Globe, June 25, 2020].

President Trump has never opposed Affirmative Action explicitly. Yet he is clearly aware it exists. For example, back in 1989, he noted entirely correctly that a “well-educated black has a tremendous advantage over a well-educated white in terms of job market.”

"Sometimes a black may think they don't have the advantage..." Then he says if he were starting out he'd like to be a "well educated black" pic.twitter.com/JFSDkRGWBb

If conservatives are serious about defending a common American civic identity, they must be serious about removing racial privilege in American law. Otherwise, they can’t act surprised that people are reacting rationally in response to clear incentives.

What Steve Sailer has called the “Flight From White” is simply self-interest in action. If Republicans really oppose this, they need to act—especially since it will be an election issue no matter what they do. It may even allow them to make inroads into the Asian vote.

I’m only half joking when I say that if the GOP can’t summon the will to do anything about this, I’d encourage all readers to take some Duolingo lessons, identify as Hispanic (which can be any race, according to the census), and bring the whole thing down via malicious compliance. Let’s hope President Trump and the Republicans give us a more honorable option.

The second step, of course: immigration restriction. While it’s easy to bash President Trump, he has taken a number of actions here recently.

Many (including me) are very critical of President Trump for not doing enough. Still, this isn’t nothing. And no other Republican would have done these things. These are changes that will help (and are helping) American workers now.

However, incredibly, inexplicably, President Trump is still leaving his greatest weapon on the table—a remittance tax that would pay for the border wall. Given that the president has just pulled the U.S. out of the World Health Organization during the pandemic, some America First action when it comes to immigration seems like far less to ask.

Finally, speaking of the pandemic, there’s the issue of Universal Basic Income, or a “Citizens Dividend.” The U.S. has already implemented this policy to some extent with the $1,200 checks that most Americans received a few months ago, and it seems possible that another stimulus is on the way.

However, Trump is setting himself up for political failure if the next stimulus is funneled through politically connected businesses and Wall Street firms instead of going straight to Americans.

Trump’s instincts are sound. He was right to make sure that his signature was on the first check that Americans received. Now he needs to do it again, but not just for Americans who make less than $40,000 [Second stimulus check: Trump says to expect more checks ‘soon,’ 10WAVY, July 7, 2020]. Middle-class Americans, including those who make more than $40,000, are being crushed by the pandemic economy and need a bailout, especially when they are already excluded from many welfare programs for supposedly making too much money.

If President Trump can’t stand up for middle class voters, the very “Middle American Radicals” his 2016 campaign represented, why should they turn out for him again?

A nation isn’t simply a static collection of people. It is also something that can be made or unmade by leaders. Our nation was created by the Founders and it is no accident that those who wish to deconstruct it are toppling their monuments.

If President Trump doesn’t want to go down in history as America’s Romulus Augustulus, he needs to change the incentives so people have an interest in identifying with and fighting for the Historic American Nation.

Abolish internal racial divisions by law; strengthen immigration restriction; bail out the middle class—historically the backbone of any nationalist movement.

If Trump can’t do those things, America will fragment. And then it’s every man, and every tribe, for themselves.