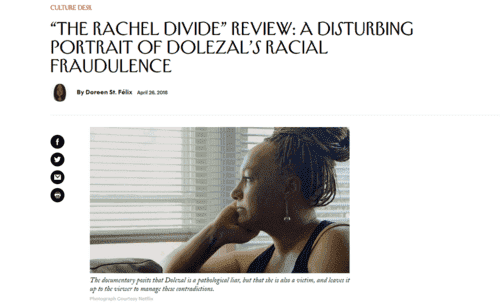 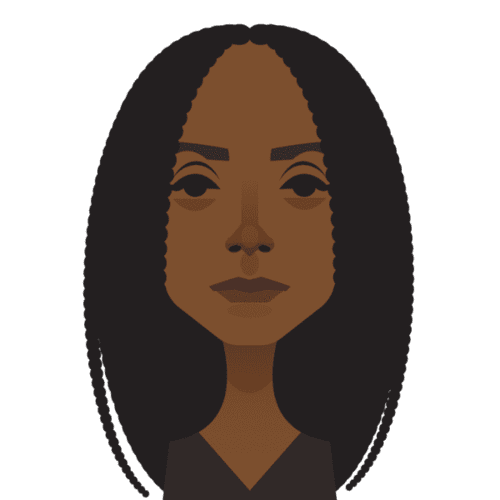 I walked into the Tribeca Film Festival première of Netflix’s “The Rachel Divide,” a domestic portrait of our modern minstrel Rachel Dolezal, already feeling bored. That’s not how I like to approach a work of art. But what could the director, Laura Brownson, reveal about this person, and the grim credulousness of our culture, that we had not deduced the evening that KXLY’s street interview with the ambushed Dolezal went viral? I happened to be on Twitter that night, in June of 2015, and was heartily amused by the too-dark foundation and the kinky wig that the nervous Dolezal wore as she, then the president of Spokane’s N.A.A.C.P. chapter, dodged the inquiries of the reporter Jeff Humphrey: “Your parents, are they white?” Weeks of pouring over the details

Didn’t they used to employ copyeditors at The New Yorker? Ms. St. Félix should bone up on the difference between pour and pore.

followed: how Dolezal, a white woman who grew up in Montana, weaseled her way into Howard University, where she submitted a painting thesis based on the interior of the black man’s mind; her work as an educator, teaching black students “The Black Woman’s Struggle”; a slew of falsified documents. But what I assumed would have evaporated into the ether of memedom extended into part of a years-long “national conversation about race.” Nonsense terms like “transracialism” and “cisracialism” had to be entertained by the likes of both Savannah Guthrie and Melissa Harris Perry. …

In contrast, “cisgenderism” is a Very Important Word full of sense, so everybody knows they must take Caitlyn Jenner’s struggle against oppressive cisgenderism very seriously.

… “The Rachel Divide” opens on a little white clapboard house in Spokane, Washington. “Who’s the gatekeeper for blackness?” Dolezal ponders in a voice-over. Her telltale blonde box braids frame her freckled and blue-eyed face. Dolezal tears apart bundles of synthetic braiding hair as she works on a client in her living room, a makeshift black-hair salon. Hair is the way she makes money now, having lost her positions at the N.A.A.C.P., at Eastern Washington University, where she was an instructor of Africana studies, and as chair of the city’s Police Ombudsman Commission. Her home is messy, strewn with books and documents and the detritus of the two black men who live with her: Izaiah Dolezal, once her adopted sibling, now her adopted son, and Franklin Moore, her biological son, whom she had with her ex-husband, Kevin Moore. Brownson’s shots often linger on this garrison of delusion, the place where Dolezal’s theories about “racial fluidity,” as she calls it, run wild.

This piece goes on in this vein of white hot anger for much longer.

Rachel Dolezal’s white parents adopted several black siblings for Rachel to grow up with, so while it’s unusual, it’s hardly inexplicable that she grew up to identify racially with her siblings.

But, wow, this black lady writer recently out of Brown U. really hates Dolezal.

It’s almost as if race were biologically real!

Have you noticed how white intellectuals, such as Ian Holmes in The Atlantic yesterday, are always getting upset on behalf of blacks, with the white guys claiming that race is just socially constructed and doesn’t represent genetic reality, whereas blacks, like this angry lady in The New Yorker, tend to take the biological reality of race very, very personally?