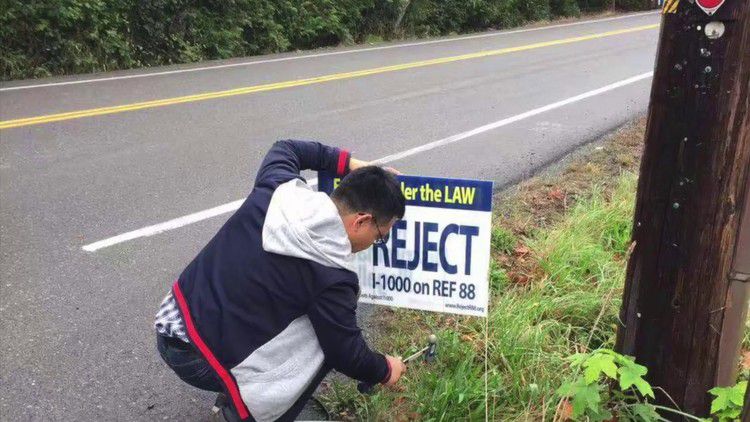 It appears that largely through the activities of Chinese citizens like the people at Washington Asians For Equality enough signatures were collected to place the same language the legislature passed on the ballot so it could be rejected by the voters.

I suspect, although I have no proof, that the plentiful street signs urging rejection of I-1000 were also placed primarily by Chinese. Of course the Chinese didn't want to be discriminated against in favor of blacks and Latinos—especially in the all-important thing for Chinese—college admission.

A story in May quoted organizer Kan Qiu:

“I believe in working hard and achieving merit. It shouldn’t be based on your race or identity. That does not make sense.” "

It is hard to get enough signatures in the short time allowed to get an initiative placed on the ballot, but they submitted a record number. That, and the ubiquitous signs urging rejection, give a favorable impression of the Chinese ability to organize and get things done.

In the video above, the sign-posters, many Asian, have their faces blurred, presumably to protect them from retaliation by supporters of "diversity."

Perhaps a new political force is arising in Washington State.

Ironically, it is the massive influx of Democrat-voting immigrants which gave control of the legislature to the Democrats and led to the re-establishment of affirmative action. But perhaps a good sign for the future is that a Chinese organization fighting affirmative action published a list of candidates it was endorsing—all but one were Republicans. And among the things the candidates were for were no state income tax, no state capital gains tax, and no highway tolls. Could the traditionally Democrat Chinese be starting to see the light?