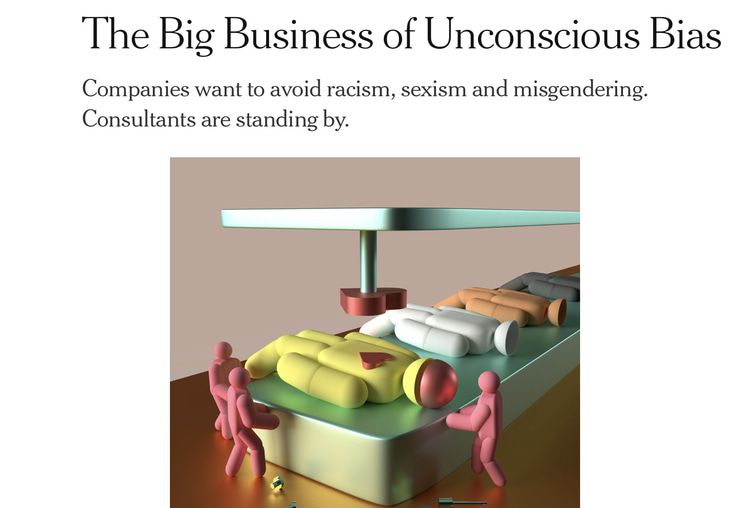 The Big Business of Unconscious Bias

Companies want to avoid racism, sexism and misgendering. Consultants are standing by.

Recently, a story circulated within the diversity, equity and inclusion industry (D.E.I.),

one that somehow didn’t go viral on social media: At an unnamed company, co-workers were taking their seats before a sensitivity training workshop began, when some white male employees entered as a group with targets pinned to their shirts — a sartorial statement about their anticipated persecution.

Apocryphal or not, “the story is powerful for two reasons,” said Laura Bowser, the board chair and former C.E.O. of TMI Consulting Inc., a D.E.I. strategy company in Richmond, Va., named for its two founders, but also the abbreviation meaning “too much information.” “One, it shows that there is still an utter lack of empathy and understanding about privilege and power dynamics. Second, it demonstrates how many diversity and inclusion trainings in the past have failed.”

DIE will not have triumphed as long as any white men still joke about it.

Of late, the D.E.I. (also known as D & I) industry is booming, creating new career paths and roles. Institutions and businesses are trying to correct power imbalances, which means a growing need for experts who can help address and define issues like unconscious bias.

“I’ve seen a difference in people’s level of engagement and desire to stretch themselves since the 2016 election,” said Michelle Kim, the C.E.O. and co-founder of Awaken, an experiential D.E.I. workshop company in Oakland, Calif., whose program is popular with the tech industry. “We’re seeing employees demanding action, not just lip service.”

“Sensitivity training became popular in the ’80s and ’90s,” Ms. Bowser said. “It focuses on the negative: what not to do or say. But one-off training doesn’t shift culture in the direction we want to see it go: building empathy.” Inclusion is an ongoing process. Pay equity, language, marketing and hiring practices are all now subject to scrutiny.

Even at a well-intentioned company that espouses progressive values, there will inevitably be slips of the tongue and insensitive emails: the wrong pronoun, an outdated term, an assumption about how a person identifies him, her or themself. The glossary of appropriate terminology and inclusive acronyms and abbreviations is constantly evolving. …

Even the experts are learning on the job. While running a recent panel, Ms. Brown asked the participants to indicate their preferred pronouns when they introduced themselves.

She forgot to say her own, which, in turn, tripped up audience members, who fell back on expressions like “you guys” for fear of getting it wrong. “I do this for a living and am literally learning in real time, in front of audiences,” she said.

Ms. Bowser also recalled a slip-up: She was at a conference with a woman (post-gender transition) whom she had originally met as a man. In conversation with this person and others, Ms. Bowser accidentally referred to her as he instead of she….

The company strives to generate inclusion with initiatives like featuring personal stories from employees on Instagram and selling rainbow Pride laptop skin. “It’s become an integrative piece of how companies engage in their broader ecosystem,” she said.

How does one break into the D.E.I. field? Some universities, including Cornell, Georgetown and Yale, are beginning to offer certificate programs and online courses on the subject.

But, for some reason, generally not mechanical engineering or actuarial science.

Some, according to Ms. Bowser, just have a natural gift for navigating difficult conversations or defusing tension in a room.

Others have a natural gift for increasing tensions with hate hoaxes and using them to blackmail executives into giving them promotions and more underlings.

Often, people enter the profession after personal experiences with prejudice at school or in the workplace.

“I identify as a member of the L.G.B.T.+ community and a woman business leader,” said Ms. Brown, whose company originally focused on more general leadership training. “I realized this was an important cause to support and a niche with growth potential.”

The job can be challenging, she said: “People only sign up because their passion is so deep that they want to fix the world.”

According to Ms. Bowser, diversity support can cost $25,000 to $450,000 a year, depending on the client’s needs. Businesses also have to factor in the time employees spend away from their desks during training.

The process can take anywhere from three months to a few years.

Because obviously, the DIE consultancies are striving manfully (oops) to put themselves out of business by permanently fixing their clients’ problems. So, corporations will only have to pay $45k annually for a few years tops, absolute limit!

Fortune 500 companies with existing diversity departments may only need educational refreshers, while companies starting from scratch may require thorough examinations of mission statements, employee reviews, airing of past grievances and more.

Everyday is Festivus in the DIE biz.

Consultants talk to employees about their day-to-day experiences, redline handbooks and intervene with coaching and conflict resolution. 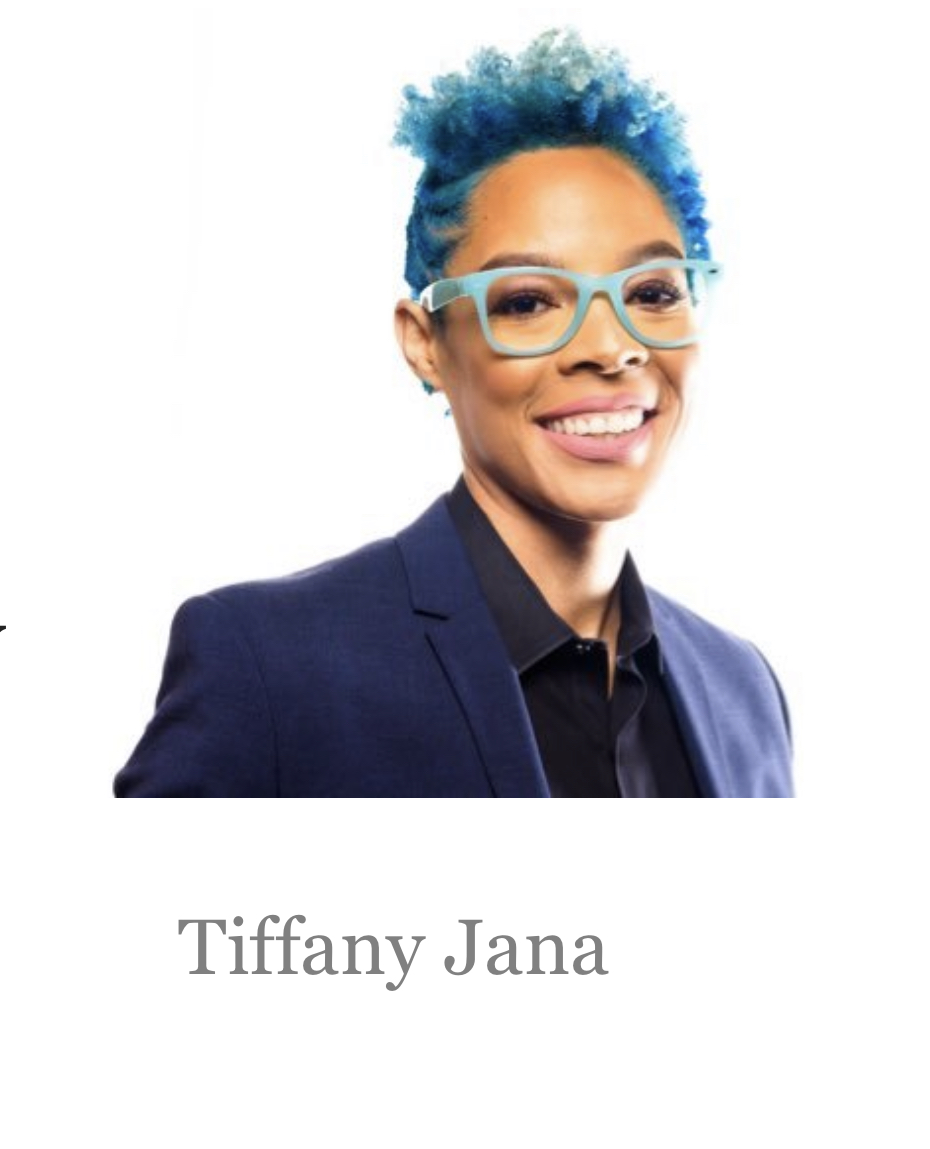 Isn’t the word “redline” triggering? What if somebody’s great-grandmother was personally redlined by FDR in 1938, which is why grandma’s house isn’t worth 7 figures?

Despite, or perhaps because of, Silicon Valley’s reputation for diversity gaps, tech tools are blooming to help. TMI’s founder, Tiffany Jana, is developing Loom, an online assessment and reporting platform that looks at an organization’s culture and identifies inclusion gaps. …

But sometimes only the human touch will do, as Eve Campan, a human resources site manager for Porex, a large filtration company, can attest. … Each time, she said, more of the original dissenters came around.

According to Ms. Bowser, the key is to make everyone, from assistants to C.E.O.s, feel as if they are part of the conversation.

I was waiting for the word “conversation” to be used.

“If you’re not making people aware and holding them responsible at the upper levels of your organization, then you don’t have a chance,” Mr. Johnson said.

In some cases, the term “diversity” itself may need to be redefined, so that it encompasses not only race, gender, religion and sexual orientation, but also veterans, people with disabilities, ageism, economic disparity, past trauma and more.

I went to see Ford v Ferrari and the box office clerk only charged me $8.75 because she misaged me as qualifying for the 61-and-up Senior Discount, while I’m still days away.

“The question isn’t about whether it’s effective,” Ms. Kim said. “It’s about how to make it effective.”

After all, everyone brings their own complex back story to the table, and offenses can go both ways. Melissa Roth, a Jewish writer recalled an incident that occurred in a fiction writing class in Los Angeles, when she used the word “gypped” and a white woman in class reprimanded her.

“I got called out for being offensive to Gypsies,” she said, “by someone who couldn’t pronounce the word ‘chutzpah.’”

One thing that your DIE consultant will never tell you is precisely who gets more privilege than whom on the Intersectional Totem Pole. Do Gypsies or Jews get more DIE Pokemon Points?

Nope, those are trade secrets.

Post
Goldman Sachs/Ozy Scam: If This Isn't Proof of White Privilege, I Don't Know What Is