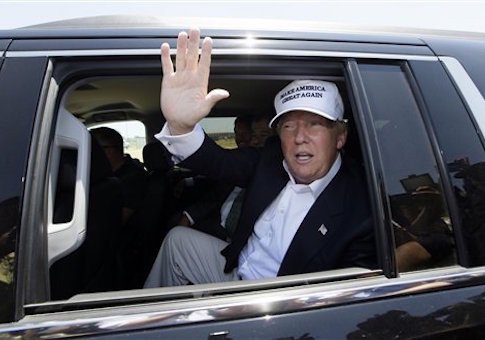 An interesting piece at the Washington Free Beacon from Matthew Continetti on the "Radical Middle" represented by Donald Trump.

The radical middle is attracted to populists, outsiders, businessmen such as Perot and Lee Iacocca who have never held office, and to anyone, according to Newsweek, who is the “tribune of anti-insider discontent.” Newt Gingrich rallied the radical middle in 1994—year of the Angry White Male—but his Republican Revolution sputtered to a halt after the government shut down over Medicare in 1995. Once more the radical middle had become estranged from the GOP. “If Perot gets in the race,” a Dole aide told Newsweek, “it will guarantee Clinton’s reelection.”

Well, here we are again, at the beginning of a presidential campaign in which the Republican Party, having lost its hold on the radical middle, is terrified of the electoral consequences. The supporters of Reagan and Perot, of Gingrich and Pat Buchanan, have found another aging billionaire in whom to place their fears and anxieties, their nostalgia and love of country, their disgust with the political and cultural elite, their trepidation at what our nation is becoming.

Of course, these people are the "Middle American Radicals" defined by the late Sam Francis and key to Reagan's victories in the 1980s. As Francis described them,

Middle American Radicals are essentially middle-income, white, often ethnic voters who see themselves as an exploited and dispossessed group, excluded from meaningful political participation, threatened by the tax and trade policies of the government, victimized by its tolerance of crime, immigration and social deviance, and ignored or ridiculed by the major cultural institutions of the media and education.

Francis is not named in the piece, needless to say, but Continetti's analysis echoes his in many ways, and is fundamentally sound. He understands that many of these voters are "economically left," at least somewhat, and have nothing to gain from the economic policies of the Wall Street Journal. And he notes, "If history repeats itself [and the GOP loses because of a Perot-like Third Party run], it will be because the Republican elite was so preoccupied with its own economic and ideological commitments that it failed to pay attention the needs and desires of millions of its voters."

Trump is also smeared as a "demagogue" in the piece, which is unnecessary. But Continetti's essay highlights the essential challenge facing the GOP, as those who run the party and claim to speak in the name of "conservatism" have fundamentally different than those who actually vote for the GOP.

More importantly, it also shows the continuing influence of Sam Francis, whose thought will only grow more important as Ethnopolitics continues to drive the American debate.