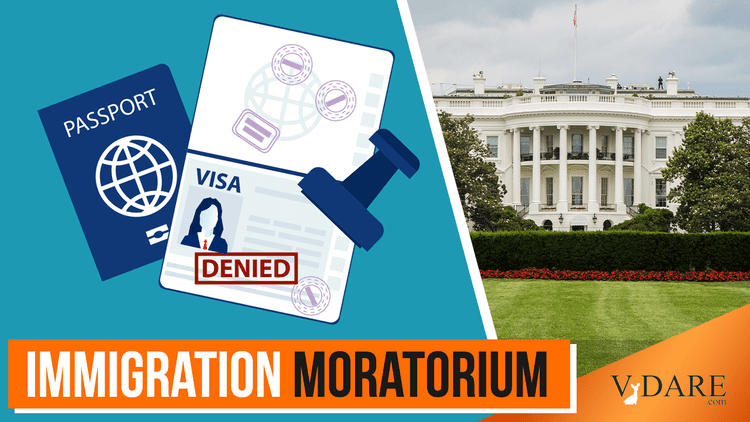 President Trump did something right Monday: He extended and expanded his temporary immigration moratorium and fundamentally changed immigration policy to Put Americans First. Most guest worker visas, including the H-1B visa, are excluded from entry under the new ban and the order is extended until the end of the year. The order is taking flak from all the worst people, a sure sign it’s over the target. It might signal Trump’s return to his old self—the Jared Kushner agenda isn’t helping him in the polls, so it’s time to deliver what the Silent Majority voted for in 2016.

Trump seemed to be rising from the dead when he announced the first moratorium in April. Unfortunately, it didn’t live up to the hype. Jared Kushner was the culprit. He gutted the original order that specifically excluded nearly all guest workers outside agriculture and healthcare. He claimed it hurt business interests [Jared Kushner pushes back on Trump’s immigration ban, by Amber Athey, The Spectator, April 21, 2020].

The order will protect more than 525,000 American jobs from foreign competition.

But the EB-5 visa, a foreign investor visa that primarily goes to Chinese millionaires and was notoriously exempt from the previous ban, does not appear in the list of excluded categories. And the proclamation continues to allow foreign guest workers in the agricultural and healthcare industries.

Still, despite the shortcomings, the order is a tremendous move. It limits most immigration for the rest of 2020 and reorients American immigration policy to serve our countrymen first.

American workers compete against foreign nationals for jobs in every sector of our economy, including against millions of aliens who enter the United States to perform temporary work. Temporary workers are often accompanied by their spouses and children, many of whom also compete against American workers. [U]nder the extraordinary circumstances of the economic contraction resulting from the COVID-19 outbreak, certain nonimmigrant visa programs authorizing such employment pose an unusual threat to the employment of American workers.

[Proclamation Suspending Entry of Aliens Who Present a Risk to the U.S. Labor Market Following the Coronavirus Outbreak, WhiteHouse.gov, June 22, 2020]

How do we know it’s tremendous? Just listen to the people who hate it.

He also argued that Immigration Patriots don’t understand the economy, that immigrants don’t take jobs and that high immigration boosted the pre-coronavirus economy. And the order will hurt the economy, he complained, by increasing the price of consumer goods and forcing companies to hire Americans at fair wages.

“This decision, in my view, will have a chilling effect on our economic recovery at a time we should be doing all we can to restore the economy,” he concluded in his Twitter tirade.

If all these people hate the ban, it must be a good thing.

Graham got immediate pushback from Linda Whitman, the mother of a displaced American worker, who wrote

My son, an Auburn graduate who has worked for IBM 22 years, was let go from IBM this month because each division was told to let go 2 US workers....(workers are now mostly in Costa Rica or the Far East....). There were only two Americans left in his division. 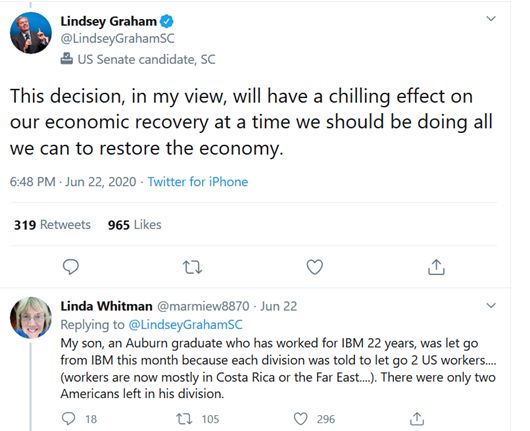 Significantly, the Main Stream Media and most Democrats have been relatively quiet. Maybe they realize it’s an incredibly popular idea and don’t want to draw too much attention to it. Polls show that anywhere from 57 to 80 percent of Americans support a temporary immigration moratorium.

Smart Republicans such as Arkansas Sen. Tom Cotton, Missouri Sen. Josh Hawley, and Florida Rep. Matt Gaetz have supported an expanded moratorium for weeks, knowing this is both the right and popular thing to do. Many of these lawmakers celebrated the expansion:

In April I asked President Trump to suspend guestworker admissions in order to promote wages and opportunities for U.S. workers during this difficult period of unemployment. 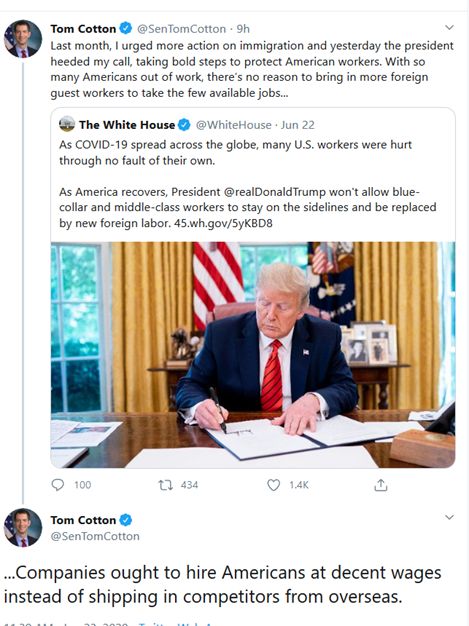 H-1B visas and similar guest worker programs are unnecessary when 45 million Americans are out of work due to coronavirus.

It should not be a partisan stance to HIRE AMERICAN in the current economic crisis.https://t.co/2zb535NYBH

The order is a wholly unexpected surprise for Trump’s nationalist base. He’s appeared weak and adrift during the past few weeks, allowing rioters to run rampant and trying his best to appease racial agitators. Kushner has appeared in total control of the White House and the Trump campaign. The main aim of Trump’s surrogates is painting Joe Biden as the real racist for supporting tough-on-crime policies.

Indeed, 2020’s President Trump has done little to remind voters of 2016’s Candidate Trump, who called for law and order and putting Americans first. The messaging seemed all designed to appeal to blacks and moderate Republicans, and no one else.

But this order shows a different Trump. Rather than tweet impotently, he’s does something the people want even though the chattering class is crying bloody murder. He’s shown strength in the face of opposition from both his own party and his political enemies.

And most importantly, he’s ignored Kushner’s advice. Earlier this month,  I wrote that Trump’s attempted crackdown on the riots might mean he sidelined his son-in-law. The crackdown on cheap foreign labor reinforces that theory.

Trump gave himself a big win for the upcoming election that will force Democrats to side with cheap foreign labor over American workers.

But he has to hammer home the point at the next rally. And the next. And the one after that.

His Keep America Great troops are guaranteed to go wild for it.