Boy, they're dragging out this DACA thing, aren't they? Where are we up to this week? 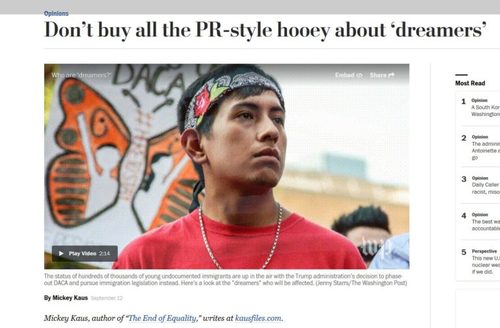 As I've been reporting, there are two issues in play here: Funding the government, and resolving the DACA business—those 800,000 illegal aliens who were given temporary work permits, probably illegally, by Barack Obama … and who are not, by the way, to be confused with "Dreamers." "Dreamers" are illegals who would have been beneficiaries of the DREAM Act, except that Congress has never been able to pass it. There would have been two million of them.

The two issues, DACA and funding the government, have two different deadlines for congressional action. For funding the government, Congress has to pass a law before midnight January 19th, two weeks from this last Friday. For DACA the deadline is March 5th, eight and a half weeks from Friday, when President Trump's extension of Obama's (probably unconstitutional) order expires.

That second one isn't really a deadline inasmuch as if Congress does nothing, Obama's order just expires, and beneficiaries of it become regular illegal aliens, subject to deportation and with no legal right to work.

That would actually be my preferred solution. The Open Borders lobbies are mighty in the land, though, including in Congress and the Main Stream Media, and they will go to the mat to prevent it from happening.

The President, too, seems to have convinced himself, or been convinced, that the DACA illegals have to be amnestied. So it's not probable that March 5th will come and go with there having been nothing done on DACA.

It does seem that the immigration issue has at least been decoupled from the funding issue. Congress will pass another Continuing Resolution on or before January 19th without any reference to DACA. Congressional Democrats now have it clear in their minds that shutting down the federal government to help illegal aliens would not play well in the country.

Thwarting President Trump's immigration reforms—a border wall, an end to chain migration and the "diversity visa lottery"—on behalf of illegals is another matter. Democrats and Open-Borders Republicans are now working hard on that.

Thursday this last week, the President met with some Republican senators for opening discussions on immigration legislation. I don't have a full list of the senators he met with, but it included Senators John Cornyn of Texas (NumbersUSA Grade in this Congress: C-minus), Lindsey Graham of South Carolina (F-minus), James Lankford of Oklahoma (D), and Charles Grassley of Iowa (C-plus).

That's a median grade of D-minus.

Next week the President is meeting with a bipartisan group of Senators to have further discussions on a DACA-plus-immigration-reforms bill. Since every single Democratic Senator is an F-minus, the median represented at next week's talks should be down in the F's. Let's be optimistic and say F-plus.

These are the people deciding the future demographics of the U.S.A., the nation our children and grandchildren will live in. This is the key issue, the major issue for our country at this time—the issue that won Trump the Presidency. Polls show major public support for the President's stated positions.

The decision-makers, though, are the Cs and Ds and F-minuses in the U.S. Senate, bought and paid for by the Cheap Labor lobbies and Ethnic-Grievance groups.

I'm going to repeat my prediction of two weeks ago. We shall end up, sometime before March 5th, with a bill giving amnesty to the DACA illegals in return for an end to the "diversity visa" lottery and a new paint scheme for the border posts.

In contrast, while we dicker around with legislation that panders to foreign scofflaws and tiny cosmetic changes to border procedures, serious countries enforce their laws.

Exhibit A: Israel. The President of that country, Benjamin Netanyahu, refers to illegal aliens as "infiltrators." Which beats “undocumented immigrant”! Israel's illegals mostly come from East Africa, Eritrea and Somalia. Five years ago, the numbers had reached 60,000, bringing with them the usual elevated levels of crime.

That's when Israel put up a big beautiful wall across the Sinai Desert, cutting infiltration from Africa to zero. The Israelis followed up with campaigns of expulsion. When sending countries refused to take back infiltrators, Israel just bribed other African countries to take them.

Twenty thousand have now gone, forty thousand still to go. The twenty thousand seem to have been low-hanging fruit, the ones easiest to deport. Now it's getting harder; so the Israelis are getting more determined.

The deal until recently was that illegals were offered $3,500 to go back to their own countries; or, if the home country was too dangerous, they'd be given a plane ticket to one of those bribed countries, said to include Uganda and Rwanda.

Illegals who refused this deal would be put in prison.

Now, though, the government is worried about prison overcrowding, so Netanyahu says they should just be forcibly expelled. Quote from him:

The infiltrators have a simple choice—to cooperate with us and leave voluntarily, along a respectable, humanitarian and legal path—or we will have to use the other tools available to us, also according to the law. I hope they will choose to cooperate with us. Every country must maintain its borders, and protecting the borders from illegal infiltration is both a right and a basic duty of a sovereign state.[Netanyahu said looking for ways to forcibly deport illegal migrants, Times Of Israel, January 3, 2018]

The Israelis have even deported a guy from Kenya who claims to be a convert to Judaism. When opposition party legislators accused the government of “racism,” the Interior Ministry official responsible replied: "Do you want half of Africa coming here?"

That's a serious country with a real government looking after its citizens.

Exhibit B: Japan. Japan is actually loosening up on immigration; but that's relative. They've set up a strict points-based system, like Canada's, for highly-skilled foreigners to get permanent residence. They are not such fools as to link it to a system of chain migration, though, with brothers and sisters, nephews and nieces, uncles and aunts pouring in.

Again, these are serious countries with real governments looking after their citizens.