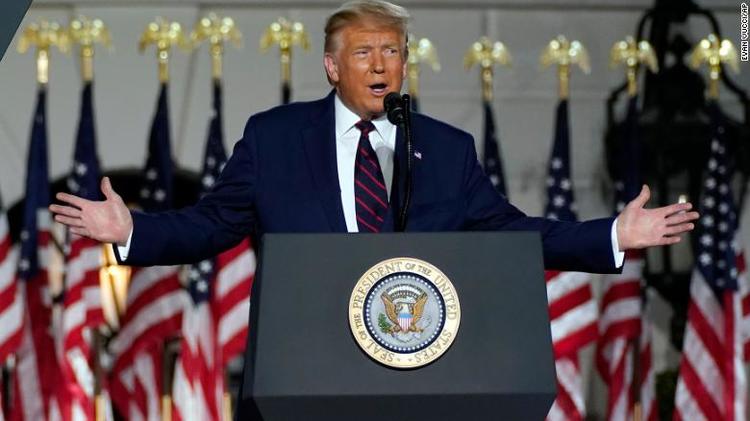 Trump Keeps Convention Focused On America First, Sort Of, Despite His Kids And Stupid Party Hacks

The Republican National Convention seems like a year ago. Antifa goons murdered Trump supporter Jay Bishop in Portland, OR on Saturday night. And Kyle Rittenhouse, 17, was charged on Thursday for killing two Antifa and wounding a third in self-defense during BLM riots in Kenosha, Wisconsin. President Trump has tweeted in memory of his Portland supporter, but his daughter-in-law Lara Trump said on Sunday that her father wants to meet with the family of lowlife Jacob Blake, whose stupid fracas with police sparked the latest saturnalia [President Trump wants to meet Jacob Blake’s family in Kenosha, Lara Trump says, by Mark Moore, New York Post, August 30, 2020].

This schizophrenia ran right through the RNC. Bottom line: Trump is still Trumpier than his pandering party—and his kids.

The convention offered red meat on illegal immigration, wars abroad, trade protectionism and law and order. But it also had cringingly cuckish moments.

Speech after speech hit the Democrats for tolerating arson, looting, and rising crime. Mark and Patricia McCloskey, the  St. Louis couple who defended their home from BLM thugs in June, warned that the Left will seize your suburban home, curtail your right to self-defense, and coddle thugs like Blake and those who threatened their home. “It seems as if the Democrats no longer view the government’s job as protecting honest citizens from criminals but rather protecting criminals from honest citizens,” Mark McCloskey said. “Make no mistake: No matter where you live, your family will not be safe in the radical Democrats’ America” [St. Louis couple warn of chaos in the suburbs if Democrats elected, by Caitlin Oprysko, Politico, August 24, 2020].

But then again, we suffered through attacks on Sniffer-in-Chief Biden for his 1990s tough-on-crime record, and completely contradictory praise for Trump’s releasing hundreds of criminals with the Javanka jail break bill.

WH adviser Ja’Ron Smith: “In the wake of the murder of Ahmaud Arbery, George Floyd and Legend Taliferro — a moment of national racial consciousness, I have seen [Trump’s] true conscience. I just wish everyone can see the deep empathy he shows to families.” https://t.co/xGlz4EpgEP pic.twitter.com/M68LvEdp03

But in his acceptance speech Thursday night, Trump dumped the soft-on-crime eyewash. He mentioned “reform” just once and blamed leftist Democrats for rising crime and municipal chaos. “If the Democrat Party wants to stand with anarchists, agitators, rioters, looters, and flag burners, that is up to them. But I, as your president, will not be a part of it,” he declared. “The Republican Party will remain the voice of the patriotic heroes who keep America safe and salute the American flag.”

As well, he said, “Americans build their future, they don’t tear down the past.”

Just as I feared last week, immigration was not a major issue for most speakers despite being a wedge issue that Democrats cannot answer. Of course, speakers condemned jumping the border and attacked Open Borders. But it was not at the forefront, and Angel Mom Mary Ann Mendoza, scheduled to discuss the horrors of illegal alien crime, was withdrawn with trademark GOP cowardice after a Leftist media hit. Worse still, five non-whites were naturalized, implicitly suggesting support for more legal immigration and demographic dispossession of the Historic American Nation. At least Trump did not burble the usual “nation-of-immigrants” nonsense.

And immigration was a central part of Trump’s keynote address. He touted his toughness on illegals, his devotion to the wall, and his fight against the Tennessee Valley Authority’s replacing American workers with H1-b foreigners:

When I learned that the Tennessee Valley Authority laid off hundreds of American Workers and forced them to train their lower-paid foreign replacements, I promptly removed the Chairman of the Board. And now, those talented American Workers have been RE-HIRED and are back providing power to Georgia, Alabama, Tennessee, Kentucky, Mississippi, North Carolina, and Virginia.

He hammered Biden for his radical agenda that, aside from an Amnesty, would stop border control, boost refugee admissions, and end travel bans from dangerous countries. “They want to open our borders while living in walled-off compounds and communities,” Trump said. “They want to defund the police, while they have armed guards for themselves.”

The glaring omissions: Zero talk about his temporary immigration moratorium, a major achievement that has halted most immigration for the rest of 2020 and protected more than 500,000 American jobs. It’s a massively popular idea that connects with unemployment, particularly with help from the Chinese Virus. It makes no sense to discuss fighting the TVA and not to mention the bigger stand against foreign workers.

Nor did Trump discuss reducing legal immigration or eliminating birthright citizenship—two ideas he’s championed in the past. This is very bad news for immigration patriots.

Overall, Trump delivered a good speech: It laid out an America First vision that returned him to his 2016 roots. He also offered a stirring conception of American identity—Americans aren’t defined by ideas or the pursuit of money, but by the brave settlers who crossed the ocean to build a new land:

Our American ancestors sailed across the perilous ocean to build a new life on a new continent. They braved the freezing winters, crossed the raging rivers, scaled the rocky peaks, trekked the dangerous forests, and worked from dawn until dusk. These pioneers didn’t have money. They didn’t have fame. But they had each other. They loved their families. They loved their country, and they loved their God.

This Winning Of The West narrative contrasts significantly with current Ellis Island mythologizing and was a welcome respite from typical Conservative Inc. blathering.

Unhappily, Tiffany Trump had already contradicted him with that typical Conservatism Inc. blathering: “We believe in the American spirit,” she said. “A country founded on ideas, not identity.”

Trump was far and away the most nationalist of any speaker. The Tim Scotts and Nikki Haleys delivered speeches that re-imagined the platform of George W. Bush: tax cuts, pro-Israel, more regulations. Forget law and order and immigration. They certainly didn’t talk about America as the land of frontiersmen. Matt Gaetz was the only GOP lawmaker who sounded like Trump.

We can like or loathe Trump, but without him the Stupid Party hacks would be running on a platform that ignored immigration and law and order and instead focused on tax cuts and racial pandering

This is Trump’s party in the sense that no one will oppose him. But he hasn’t fully remade it in his image. A loss in November will mean Never Trumpers will attempt a Bushist coup. But a Trump win would further marginalize his enemies and leave open the possibility that a National Conservative GOP may yet emerge.

Trump knows the base better than anyone else in the party and he knows how to win an election. The America First message of his address is the platform for victory—he just needs to remember that, and his immigration moratorium, to make it unassailable.