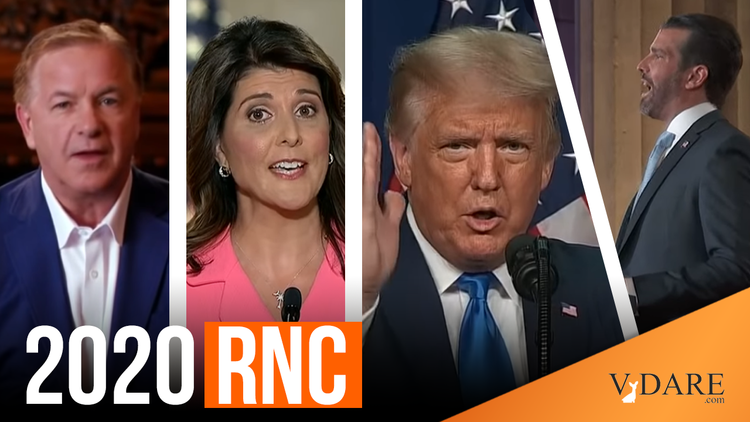 First Night Of RNC Mostly Stays On America First Message—Except For Cringe Condemnations Of "Racism" And Support For “Criminal Justice Reform,” I. E. Letting Criminals Out Of Jail

The first night of the Republican National Convention presented a welcome contrast to last week’s Democratic National Convention. Gone were the boring Zoom call presentations, drab aesthetics, and pudgy people in masks. The RNC featured a mix of well-produced pre-recorded speeches and speeches from a DC auditorium, aesthetics that evoked the historic American nation, and a high-energy spirit that was much better than the entirety of the DNC.

The RNC’s message was largely solid. Speakers warned a Joe Biden administration would coddle criminals, give amnesty to illegal immigrants, and champion tech censorship. Trump was touted as the law and order candidate who’s tough on foreign adversaries and wants to protect Americans. The two best speeches delivered were from Matt Gaetz and the McCloskeys.

Gaetz delivered a nationalistic speech that excoriated the anti-American vision of the Democrats and celebrated this country as the land of conquerors.

“America is not just an idea or a constitution, it is our home. We must protect our home with unbreakable Made in America strength. Strength I see every day in President @realDonaldTrump.”

The McCloskeys—the famous St. Louis couple who defended their home from Black Lives Matter rioters—gave a stark warning about Democratic anarcho-tyranny and how they want to destroy the suburban dream.

The McCloskeys Were Awesome!

“Make no mistake, no matter where you live your family will not be safe in the Radical Democrats America.”

While most of their speeches were good, there were some lowlights. Donald Trump Jr. was a mix of good and very bad. He called for the limiting of immigration to help American workers, but he also labelled George Floyd’s death a “murder” and demanded an immediate end to “racism.” [Donald Trump Jr.: If Democrats Cared, ‘They’d Limit Immigration,’ by Neil Munro, Breitbart, August 24, 2020]

"What happened to George Floyd is a disgrace. And if you know a police officer, you know they agree with that, too." - @DonaldJTrumpJr at the #RNC2020 🇺🇸

Nikki Haley and South Carolina Sen. Tim Scott both delivered speeches that celebrated themselves as non-whites and pandered to minorities. Haley bragged about taking down the Confederate flag while Scott extolled the virtues of criminal justice reform [SC’s Nikki Haley, Tim Scott reflect on being minorities during RNC speeches boosting Trump, by Thomas Navelly, The Post And Courier, August 24, 2020]. Neither speech fit the America First theme of the convention.

These lowlights aside, the first day was much better than expected and hopefully signals what the rest of the week will be like. We can also hope there are no more cringe-inducing calls to end racism or endless paeans to criminal justice reform. America is burning right now—the answer isn’t what Tim Scott is serving.