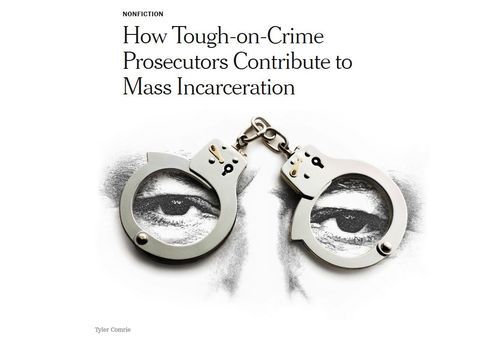 NYT: Breaking Gun Control Law Is a "Victimless Crime," Assuming You Are Black

… These consequences are on full display in “Charged: The New Movement to Transform American Prosecution and End Mass Incarceration,” by Emily Bazelon, a lecturer at Yale Law School and staff writer at The New York Times Magazine. …

To show how prosecutorial power operates in the real world, Bazelon follows two young defendants through the system: Kevin (a pseudonym), a 20-year-old from the Brownsville neighborhood of Brooklyn who is charged with illegal gun possession, and Noura Jackson, a teenager from Memphis who is accused of murdering her mother.

Their cases are very different — one involving a victimless crime, the other the most heinous crime of all — and so are the district attorneys.

Of course, there’s no mention in this review of Emily Bazelon’s once famous grandfather David Bazelon’s role in more than doubling the national murder rate from 1964-1975. Nor is there any mention of the last time liberals got control of the criminal justice system and left many of America’s big cities as desolate ruins.

As Talleyrand said of the Bazelon Dynasty: “They had learned nothing, and forgotten nothing.”

In The New Yorker, Adam Gopnik has a more insightful review:

Now the legal journalist and Times Magazine staff writer Emily Bazelon, in her book “Charged” (Random House), puts flesh and faces to Pfaff’s statistical and largely abstract proposition. “Charged,” though far-reaching in purpose, is above all a study of two cases in which prosecutorial misconduct or overreach put two people through hell. She tells these stories in microscopic detail, …

She has a good ear for talk, and a fine eye for detail; at one point she makes the slightly hallucinatory discovery that the recently elected Brooklyn D.A., Eric Gonzalez chose his career path after reading Tom Wolfe’s “The Bonfire of the Vanities” as a teen-ager—not an obvious book to point someone on a path toward public service. (He was fascinated not by the deep cynicism of Wolfe’s view but by the way that the D.A. in the novel is able, heroically, to even things up with a Master of the Universe—proof, again, that we find in books what we want to find in books.)

Yet, though Bazelon’s larger points about the madness of prosecutorial power are all impeccably well taken, the two central cases she uses to illustrate these points are somewhat surprising choices. It wouldn’t be hard to find, among the tens of thousands of cases that are plea-bargained in New York City alone every year, one in which a poor kid is penalized by a law that’s out of all proportion to the offense—there are kids who get locked up for drug offenses that in nearby states are no longer even misdemeanors. But Bazelon has written about a twenty-year-old black New Yorker, whom she calls Kevin, who has been arrested for the illegal possession of a loaded handgun and, given his particular charge, was subject to two years of imprisonment, the “mandatory minimum” stipulated by New York’s strict anti-handgun laws. Kevin may well have been, as he insists and as Bazelon accepts, little more than an innocent third party to the gun offense—“holding” the gun for friends rather than using it, or intending to use it, in the commission of a crime. But his prospective sentence was not simply a result of prosecutorial overreach; it was an unintended outcome of well-intended efforts at gun control. Gun violence is an especially brutal plague in poor and minority neighborhoods, and Bazelon acknowledges that Bill de Blasio, the city’s most progressive mayor in decades, has been even more rigorous than his predecessors in encouraging these mandatory-minimum gun-possession indictments.

The other case in the book is Noura Jackson of Memphis, who was convicted of murdering her mother, but got let out on prosecutorial misconduct. This sounds like another black thing, but it turns out Noura Jackson was a Great White Defendant, which perhaps explains why the Memphis DA was so intent on getting her convicted.

… Perhaps the most radical and challenging of the new approaches to incarceration involves the move to cap all prison sentences at some designated limit. Pfaff, in his book, proposed a test program in which prisoners, including those convicted of violent crime, would, after serving some years, be released when they reached the age of forty; the anti-incarceration activist Marc Mauer has made a similar case with a different figure, arguing, on a Norwegian model, that all prison sentences be capped at twenty years.

Yeah, the Norwegian model worked out well in the case of that right wing terrorist jerk who murdered all those kids and now files jailhouse complaints about having to play videogames with only an obsolete PS/2. He thinks he’s going to automatically get out after 21 years (although the Norwegians will hopefully figure out some loophole in their stupid policy to keep him locked up forever).

I’m all in favor of reforms to rein in abusive prosecutors and cops, but the instant that gets tied to blacks being imprisoned more than whites, everything catastrophically falls apart and we wind up with thousands more murder victims per year, as we saw with homicides increasing over 22% from 2014 (Ferguson) to 2016 (the year Trump won).