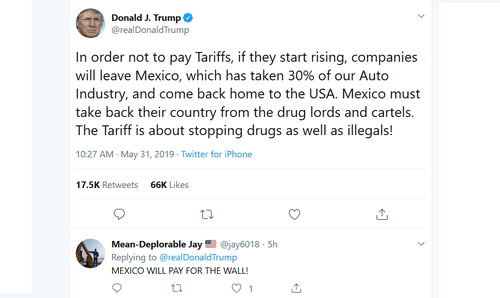 President Trump suddenly announced on Thursday a serious proposal to curb illegal immigration: impose tariffs on Mexico to convince our southern neighbor to solve the problem. Maybe this welcome miracle happened because Javanka has left town.  Because the week’s earlier Trump trope, outflank the Democrats on the Left on black crime, is seriously Javanka-style stupid.

Trump plans to impose a 5 percent tariff on all Mexican goods starting June 10. [Statement from the President Regarding Emergency Measures to Address the Border Crisis, May 30, 2019]The tariffs will continue to rise to 25 percent by the end of the year and will only come down if Mexico shows progress in halting illegal immigration. Trump says the plan would also pressure Mexico to stop the flow of drugs and possibly attract manufacturers back to America.

In order not to pay Tariffs, if they start rising, companies will leave Mexico, which has taken 30% of our Auto Industry, and come back home to the USA. Mexico must take back their country from the drug lords and cartels. The Tariff is about stopping drugs as well as illegals!

This is a strong and sensible move by the president. It was naturally met with outrage from Mexico, the U.S. Main Stream Media, and, needless to say, by some Republicans. [Trump says U.S. to impose 5 percent tariff on all Mexican goods, by Alex Johnson, NBC News, May 30, 2019]

Journalists interrogated White House chief of staff Mick Mulvaney over the proposal and insisted Americans would pay the cost of these tariffs. Mulvaney reminded the press that illegal immigration costs more than a temporary rise in some consumer goods.

"Illegal immigration comes at a cost," he said. "The American taxpayer is paying for what's going on at the border."

Mexico responded with a helpful lecture on how the tariffs violate America’s “values.” "The Statue of Liberty is not an empty symbol," Mexican President Andres Manuel Lopez Obrador said in a letter. "With all due respect, although it has the sovereign right to express it, the motto 'America First' is a fallacy."

Conventional Republicans, such as Iowa Senator Chuck Grassley, also expressed concern with the tariffs: “This is a misuse of presidential tariff authority and counter to congressional intent."

But this is a necessary move for Trump. Mexico has benefited immensely from illegal immigration thanks to remittances. It’s one of the chief sources of foreign income for our southern neighbor. Mexico received nearly $29 billion in remittances in 2017, the vast majority of that money coming from the U.S. [Mexicans abroad sent record $28.8 bln home in 2017, Reuters, February 1, 2018]

The tariff is clearly not a remittance tax, but it’s a step in that direction. The tariff puts pressure on Mexico to solve the problem of Central Americans freely traveling through its country to get to our southern border. Which (thanks to the federal judiciary and Congressional inaction) has essentially collapsed: the number of illegal entries continues to increase, as do the migrant caravans. [Southern border crossings by asylum-seeking migrants kept rising in April, set new record, by Alan Gomez, USA Today, May 8, 2019]

Reportedly, the tariff isn’t the only solution to the border crisis that the administration has under consideration. The White House may toughen asylum laws to deter Central American migrants. It would bar entry to those who have resided in another country besides their native one and migrants who have been denied asylum in another country [Trump weighs plan to choke off asylum for Central Americans, by Ian Kullgren, Ted Hesson, and Anita Kumar, Politico, May 30, 2019]

This would signal to migrant caravanners that they will not obtain asylum in the U.S.

The immigration plan he proposed earlier this month emphasized this point. It offered no Amnesty, called for much tougher border security and mandatory e-verify, and would raise customs fees and fines to make other countries pay for the wall.

The president has also continued to sound strong on immigration at rallies. “No nation can tolerate a massive organized violation of its immigration laws, and no one should run for office without an iron clad pledge to protect and defend America's borders,” he said at a Florida rally earlier this month.

Trump still has many things to do on illegal immigration. The wall needs to be built, his enforcement policies need to win in court, and he needs to push other measures through executive orders.

But the new tariff is a positive move and should comfort immigration patriots.

Still, this is Trump and you can never let down your guard. (Neither can the Left).

“Anyone associated with the 1994 Crime Bill will not have a chance of being elected. In particular, African Americans will not be able to vote for you. I, on the other hand, was responsible for Criminal Justice Reform, which had tremendous support, & helped fix the bad 1994 Bill!”

“....Super Predator was the term associated with the 1994 Crime Bill that Sleepy Joe Biden was so heavily involved in passing. That was a dark period in American History, but has Sleepy Joe apologized? No!”

Many people try to take credit for Criminal Justice reform, even @cnn commentators. What a JOKE! Only @realDonaldTrump and Jared Kushner can take credit for giving so many people a second chance and a new FIRST STEP!

This is a ridiculous  turn for a man who once promised to restore law and order.

The anti-Biden rhetoric is also hypocritical given Trump’s critique illegal immigration. Trump still highlights the crime and threats that comes from those who illegally live in the U.S. He calls MS-13 gang members “animals” and vows to rid them from America [Trump’s “animals” remark and the ensuing controversy, explained, by Dara Lind, Vox, May 21, 2018] His administration has tried to implement strong enforcement policies—such as zero tolerance detention for those caught illegally crossing the border—to deter illegal immigration.

These policies disproportionately affect non-whites. They put a lot of people in jail. And Trump uses language that’s just as harsh as “super predator” to describe those he doesn’t want in the country.

So Trump’s rhetoric against Biden could be easily used against himself on illegal immigration.

The 1994 crime bill helped reverse the horrific crime rates America suffered in the 1980s and early 90s. Some of the biggest supporters of the bill were black leaders who were desperate for any solution to reduce the violence and crime in their communities. [The Misplaced Criticism of Clinton's Crime Bill, by Ronald Brownstein, The Atlantic, April 14, 2016]  Most Republicans also supported the measure. The primary conservative criticism of the bill: it wasn’t tough enough [GOP to Seek New, Stronger Anti-Crime Bill, by David Savage and Ronald Ostrow, Los Angeles Times, November 12, 1994].

No Republican called it racist at the time.

Trump and Republicans engage in foolish bad-faith revisionism with their criticism of the crime bill. Presumably these attacks are cynical attempts to undermine Biden’s high support among Democrats and sway blacks to vote for Trump. Neither is likely to work. Democrats rarely entertain Trump’s critiques of their leaders, no matter how woke they are. Most continue to insist that the president’s attacks on Sen. Elizabeth Warren’s phony Indian heritage are “racist,” even though it is obvious Warren is not Indian. [Why Trump's Attacks On Sen. Elizabeth Warren Are Dehumanizing To Native People, NPR, February 12, 2019]

It’s also unlikely to win over black people. Trump was once very popular among blacks when he hosted “The Apprentice” and inspired dozens of rap songs. But he has since lost that support and he scored just about as many black votes in 2016 as past Republicans (but no worse, to be fair). ['The Apprentice' helped Trump win approval of African-Americans and Latinos — here's how he lost it, by Noah Friedman, Josh Barro and Lamar Salter, Business Insider, July 17, 2017] Trump’s approval rating among blacks stands at 10 percent, roughly equivalent to his share of the black vote in 2016.[Politico Approval Poll]

Criminal justice reform, however, is one of Trump’s few legislative victories. He was praised for it by the MSM and by assorted celebrities, an unusual experience for a president usually despised by both.

Is he vain and shallow enough to be swayed by this?

It’s great that Trump has just shown he’s still committed to enforcing U.S. immigration law. Now he just needs to remember what he originally ran on—and not pander to voters who will never support him.

He needs to get out more—and see if his crowds chant “Release More Criminals!”