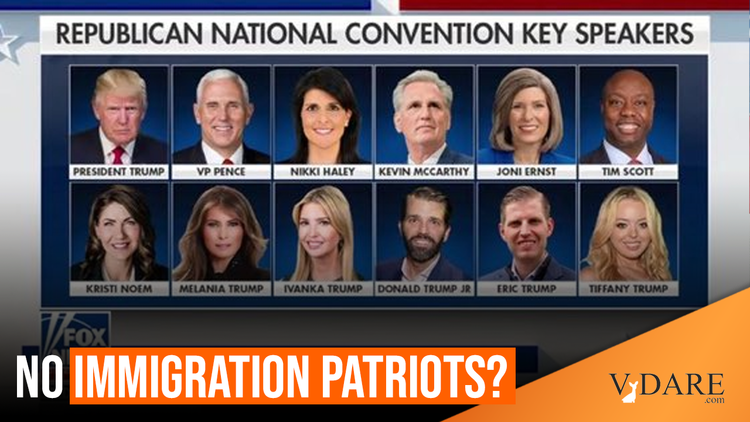 Convention Conundrum: Democrats Want To Dodge Immigration Bullet. But Why Is GOP Helping Them?

During the snoozefest they called a convention, Democrats tried to paint themselves as moderates who will restore normalcy to America. And they ignored immigration, other than discussing “kids in cages” and damning Border Wall supporters to hell. You can see why: Their Open Borders agenda is massively unpopular. But, incredibly, the GOP apparently intends to ignore immigration too. Almost none of the top speakers at this week’s Republican Convention are immigration patriots, with the exception (arguably—ask Ann Coulter!) of President Donald J. Trump himself. Does Javanka just want to lose gracefully and go home to Manhattan?

Joe Biden and Kamala Harris are not, as they tried to convince those who stayed awake long enough to listen, moderates on immigration. Here, for instance, is Biden’s plan:

Harris would even decriminalize jumping the border, just as her primary opponents said they would. Biden has been reluctant to support this crazy idea, but the hard-Left Treason Lobby and its corporate allies will push him in that direction. He would also provide taxpayer-financed health care to illegals and he backs a freeze on deporting them [Biden commits to moratorium on deportations of immigrants, by Melissa Gomez, Los Angeles Times, March 15, 2020].

In other words, the temporary immigration moratorium issue is a winner for Trump.

That’s likely why David Shor, a well-respected Democratic analyst who was recently the victim of one of those hilarious intra-Left heresy hunts, warns that his party’s position alienates working-class voters and provides ammunition to the other side. He says:

Non-college-educated whites, on average, have very conservative views on immigration, and generally conservative racial attitudes. But they have center-left views on economics; they support universal health care and minimum-wage increases. So I think Democrats need to talk about the issues they are with us on, and try really hard not to talk about the issues where we disagree. Which, in practice, means not talking about immigration.

But, in an amazing stroke of luck for the Democrats, Republicans seem not to want to talk about immigration, either. They haven’t discussed the moratorium much since Trump announced it four months ago, nor after he expanded it in June.

The GOP Establishment, as usual, wants Trump just to focus on the economy [Trump, GOP place big bet on economy for 2020, by Jordain Carney, The Hill, June 21, 2020]. One rationale for this cosmically stupid advice: Some surveys show voters worry less about immigration now in the wake of the Chinese Virus. A July NPR poll found voters ranked immigration near the bottom of issues they’re concerned about [Americans Back Trump On Immigration—But Only To Stop COVID-19, Poll Finds, by Joel Rose, NPR, August 5, 2020].

But in fact, of course, there is an immigration dimension—and solution—to practically every problem that America faces. And that is especially true today, as Reuters’ Chris Kahn explains in this twitter thread:

…but only if he talks about immigration in a different way. Stick with me, I’ll explain.@ReutersPolitics @IpsosNewsPolls

“The overall message is the President has built the world’s best economy once and he’s in the process of doing it again,” a Trump campaign official told Time [How Trump Plans to Counter the Democrats' Convention Message of Hope, by Brian Bennett, Time, August 21, 2020].

But if the GOP wants to show Trump is rebuilding the economy, they should add that he’s protecting more than half-a-million American jobs with the temporary moratorium at a time when unemployment is more than 10 percent. The moratorium reinforces Trump’s “Buy American, Hire American” order and encourages companies to shake their dependency on cheap foreign labor.

The administration saw that in April, when Trump blocked some new arrivals.

President Trump is committed to protecting the health and economic well-being of American citizens as we face unprecedented times,” White House press secretary Kayleigh McEnany said. “As President Trump has said, ‘Decades of record immigration have produced lower wages and higher unemployment for our citizens, especially for African-American and Latino workers.’ At a time when Americans are looking to get back to work, action is necessary.

But for whatever reason, that message has more recently been MIA.

There are signs are that Trump and his campaign people might be recovering their senses. Illegal immigration seems to be an advertising priority. In one ad released in battleground states, viewers learn that Biden’s support for Amnesty would threaten the jobs of millions of Americans.

White House senior adviser Stephen Miller told Reuters (above) that the emphasis on immigration would show Biden’s “massive political vulnerability.” Of course, the ads on immigration deeply irritate Establishment GOP consultants.  “If he’s not talking about the pandemic or the economy, he is not talking about what Americans are most concerned about,” former Marco Rubio adviser Alex Conant told Reuters’ Hesson and Chris Kahn.

But Inside-The-Beltway hacks just don’t get it, as Hesson and Kahn reported:

Ann Rone, a 49-year-old radiology technologist in Missouri, is an undecided voter who supports legal immigration but agrees that it should be paused during the pandemic to free up jobs for Americans.

“They may not be the best paying jobs, or what we want, but they’re jobs,” she said.

“Voters want a president who will protect American workers and our borders,” Murtaugh said. “And you do that by enforcing immigration laws.”

Trump has also been resurrecting 2016’s hard-hitting message on illegal-alien crime. In Pennsylvania last week, after walloping Biden and Harris for supporting “deadly Sanctuary Cities that have been so bad for you and everybody else,” he said:

As district attorney of San Francisco, Kamala put a drug-dealing illegal alien into a job and jobs program instead of into prison. Four months later, the illegal alien robbed a 29-year-old woman, mowed her down with an SUV, fracturing her skull and ruining her life.

It was trademark Trump—and 2016’s winning message. Trump would be a fool not to stick with it and show himself to be the man America elected in 2016: pro-worker, pro law-and-order, pro-America First.

Trump’s top priority: Controlling his campaign message not only at the convention but also through Nov. 3. The Treason Lobbyists inside the GOP must be shut down.

His re-election depends upon it.