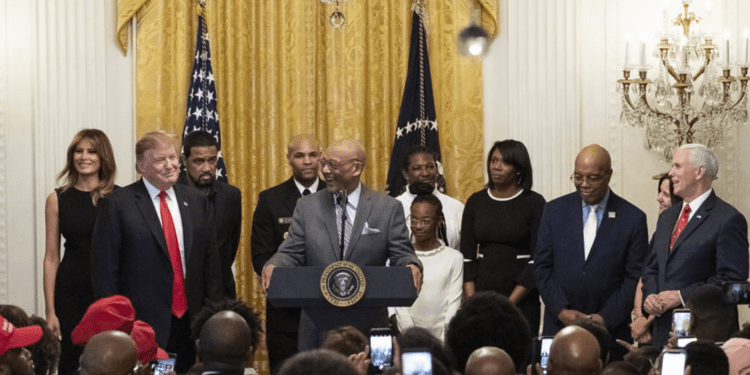 Forget THE APPRENTICE, Trump—Blacks Will Never Vote For You Enough To Make A Difference

President Trump has apparently been persuaded that he can dramatically increase his black support with “Criminal Justice Reform” a.k.a. relaxation and other tactics like increased funding for black universities and rescuing black rappers from criminal punishment. It’s all part of his major black outreach effort. Some polls suggest it’s working; common sense and more serious surveys say it isn’t. But this outreach is distracting him from appealing to the people who voted for him. Even worse, it’s harming the country.

Part of the effort is Black Voices for Trump, which the campaign launched last month with a six-figure ad buy in black media [Donald Trump Campaign Newspaper and Radio Ads Highlight Accomplishments for the Black Community,  Blog4 President.com, November 13, 2019] The New York Times’  Peter Baker believes the outreach is less about black votes and more about calming skittish white suburbanites who might be uncomfortable with Trump’s “incendiary” rhetoric. Allegedly, these moves reassure them that Trump is not a racist [Trump Reaches Out to Black Voters, November 8, 2019]. 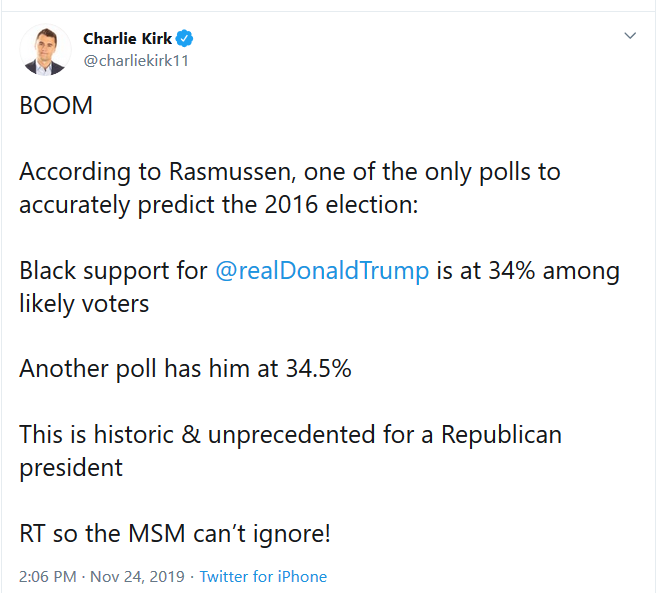 But common sense says the polls are outliers.

That 34 percent is two dozen points higher than Gallup’s survey that put black approval of Trump at 10 percent [Analyzing Black Support for President Trump, by Frank Newport, November 20 2019], and 26 points higher than the percentage of blacks who voted for the president in 2016. It’s only a few points lower than Trump’s overall approval rating of 43 percent.

If Trump’s overall approval rating is just 43 percent, it’s unlikely that 34 percent of blacks approve of his job performance, particularly given that only 8 percent voted for him in 2016. It’s also widely divergent from other polls. An Associated Press survey found that only 4 percent of black Americans think Trump has been good for blacks; 81 percent say the opposite [Poll: Black and Latino Americans think Donald Trump's actions have made life worse for people of color, October 7, 2019].

Moreover, even if this slight improvement in Trump’s black vote were real, it is immaterial because blacks make up a relatively small part of the electorate (11.9%). As Steve Sailer has long argued, any such gain would easily be swamped by proportionately smaller changes in the white share of the electorate (73.3% %).[Black voter turnout fell in 2016, even as a record number of Americans cast ballots, by Jens Manuel Krogstad and Mark Hugo Lopez, Pew Research Center, May 12, 2017]

Unfortunately, however, these much hyped polls will encourage Trump to continue harping on Criminal Justice Reform and other black symbols.

Perhaps this is understandable. Remember that Trump really was very popular with blacks and other minorities in the early days of his reality TV show The Apprentice. But it didn’t last once he got involved in politics.

One example is one of the president’s few legislative achievements, the First Step Act, which retroactively applied the Fair Sentencing Act’s standard of treating crack and powder cocaine offenses similarly. Before that “reform,” which Barack Obama signed in 2010, crack offenders were treated much more harshly. Trump’s First Step freed more than 3,000 inmates and reduced the sentences of another 1,700. Black men, of course, benefited the most [The First Step Act promised widespread reform. What has the criminal justice overhaul achieved so far?, by Dartunorro Clark and Janell Ross, NBC News, November 24, 2019].

Trump touts the legislation as a huge service to blacks and castigates the Democrats for failing to accomplish it. Jared Kushner, one of the architects of the bill, insists the “reform” is turning ex-cons into Republicans [Jared Kushner tells donors ex-prisoners are joining the GOP, by Jonathan Swan, Axios, August 25, 2019]. Proponents claim the new law only released “non-violent” criminals who are ready to contribute to society.

But the data say otherwise. Many of the criminals released were rapists and violent criminals. Of the initial 2,243 released, 239 were sex offenders. Another 496 were convicted of weapons charges, and 59 were convicted of homicide and/or assault [Violent criminals and sex offenders released early due to 'First Step Act' legislation, by Gregg Re, Fox News, July 22, 2019]. One of the first released is now charged with murder [Gang member released under First Step Act wanted for murder, by Daniel Horowitz, Conservative Review, October 8, 2019].

Unsurprisingly, Trump’s own Justice Department wants to limit the First Step Act’s impact. Attorney General Bill Barr directed federal prosecutors to keep criminal offenders eligible for release under the law locked up because he rightly thinks the law will increase crime rates. [Trump boasts that his landmark law is freeing these inmates. His Justice Department wants them to stay in prison, by Neena Satija, Wesley Lowery and Josh Dawsey, Washington Post, November 7, 2019

But springing blacks from the joint isn’t Trump’s only appeal to those who won’t likely vote for him.

He also wants to shore up black support by helping historically black universities (HBCUs). Trump backed a bill that provides $255 million annually to black colleges and makes it easier to obtain student loans [Senate passes bill to permanently fund historically black colleges and universities, by Shawna Mizelle, CNN, December 5, 2019]. Trump had already increased the funding by 17 percent, and the administration is working hard to get more money for faith-based HBCUs [Trump to HBCU Leaders: No One Has Done More for You Than Me, by Lauren Camera, U.S. News & World Report, September 10, 2019].

Of course this largesse has done no good. Black leaders gave Trump the cold shoulder, and this pitch received a lukewarm reception from HBCU administrators at a September conference. Protests erupted when he spoke at the historically black Benedict College in October [Trump speaks at HBCU Benedict College as students are asked to stay in dorms, by Eric Connor and Carol Motsinger, Greenville News, October 25, 2019]. Many leaders say Trump’s appeal is insulting even though they appreciate his money.

But more money for black colleges wasn’t just a waste politically, given that it didn’t help Trump. HBCUs, more dependent on government aid than other schools, are frequently threatened with losing accreditation due to poor academic performance [Perilous times for black colleges, by Ernie Suggs and Eric Stirgus, Atlanta Journal-Constitution, February 1, 2018].

Another of Trump’s foolish moves to get black voters: adopting the plight of black rapper A$AP Rocky. The rapper was arrested in Sweden for assault over the summer, which ignited outrage among celebrities and A$AP Rocky’s many fans. The Donald stepped in to help. He pressured Sweden to release the rapper [Trump Allies Hoped Freeing A$AP Rocky Would Help Him Win Over Black Voters, by Hunter Walker, Yahoo News, August 23, 2019].

Result: A$AP Rocky never thanked Trump. But that’s unsurprising—the rapper has fantasized about assassinating Trump. And so Trump looked like a clown on the world stage, and few blacks appreciated his help.

The president’s zeal to further black interests contrasts sadly with his inaction to further the interests of his own voters. Despite some progress, the Wall is barely begun. He’s done little or nothing to end Birthright Citizenship, cut chain migration, or reduce immigration in general.

Sixty-three million Americans in 30 states voted for the wall, not for the early release for thousands of crack dealers.

The Watcher knows Trump pushes positive immigration reforms and would like to do more. But he spends far too much time on tangential black issues to no purpose. Record low black unemployment and the First Step Act are now a bigger part of his stump speeches than concerns over mass immigration.

Funny thing is, Trump hasn’t focused on the one policy that would help blacks: cutting immigration. Mass immigration hits blacks hard because immigrants take jobs. A promise to protect black jobs is a far better pitch than releasing black drug dealers—who, by the way, return to black neighborhoods and harm law-abiding blacks! A record low unemployment rate among blacks would go even lower if Trump would curtail immigration. And that “outreach effort” would help all Americans.