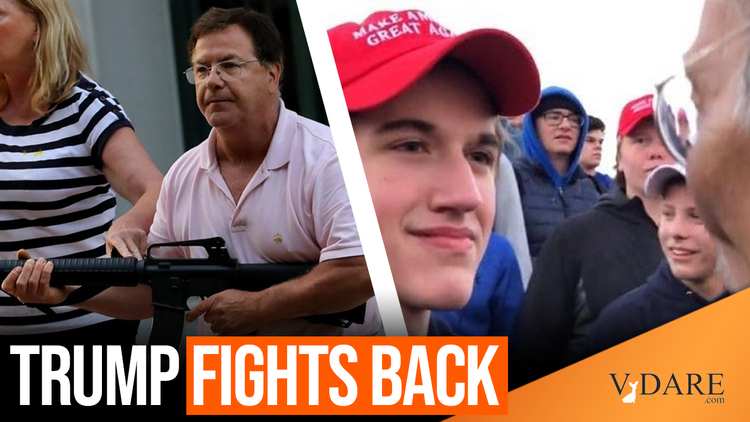 Trump Fights Back: Invites The McCloskeys And Nick Sandmann To Speak At RNC

It won’t take much to awaken those Americans hoping for a restoration of law and order, too afraid now to speak out against the Black Lives Matter/Antifa insurgency remaking our nation during an unimpeded Bolshevik Revolution.

On July 11, this writer stated President Trump must invite Mark and Patricia McCloskey to the White House and he’d have the chance to win re-election.

Patricia and Mark McCloskey, the St. Louis homeowners who pointed guns at protesters earlier this summer, will speak at the Republican National Convention.

The Republican convention will take place digitally between Aug. 24 and Aug. 28, according to CNN. The McCloskey’s [sic] scheduled appearance is a sign the convention is another Trump-fest focused on appearances over substance.

The McCloskey’s [sic] gained attention this summer after being recorded brandishing guns outside their mansion and threatening protesters walking on a private street en route to protest outside of St. Louis Mayor Lyda Krewson’s home to protest her decision to publish the names and addresses of people in favor of police reform in the city.

About 500 protesters were walking down the block near the McCloskey's [sic] home to bypass road closures that blocked access to the mayor’s home, according to Daniel Shular, a local reporter who recorded the incident.

“A door next to the gate at Portland Place was unlocked and protesters went through it to cut through the neighborhood to get to Krewson’s house,” he told CNN.

That’s when the couple came out of their house holding guns. They exchanged words with a couple of protesters, but no one was hurt and no shots were fired. The McCloskey’s [sic] were later charged with unlawful use of a weapon.

However, President Trump became quick fans [sic] of the couple. White House Press Secretary Kayleigh McEnany told reporters days after the incident, President Donald Trump “said it is absolutely absurd, what is happening to the McCloskeys.”

Mark McCloskey defended his actions saying last month he was “in imminent fear they would run me over, kill me.”

“I was a person scared for my life, protecting my wife, my home, my hearth, my livelihood. I was a victim of a mob that came through the gate,” he told CNN’s Chris Cuomo in July.

McCloskey added it is “ridiculous” to consider him the face of opposition to the Black Lives Matter movement after the incident.

Nick Sandmann, too. The boy who smirked (with apologies to Harry Potter, “the boy who lived”), and then successfully sued — and settled — with those corporate media outlets who defamed him.

All across America, people wait for the pendulum to swing back towards sanity. That Mark and Patricia McCloskey and Nick Sandmann will be speaking at the 2020 RNC Convention is a powerful indication the pendulum is headed back toward not only law and order, but a President Trump prepared to rally the Historic American Nation against a Democrat Party that’s tipped.

And this, seemingly insignificant, is the ultimate white pill.