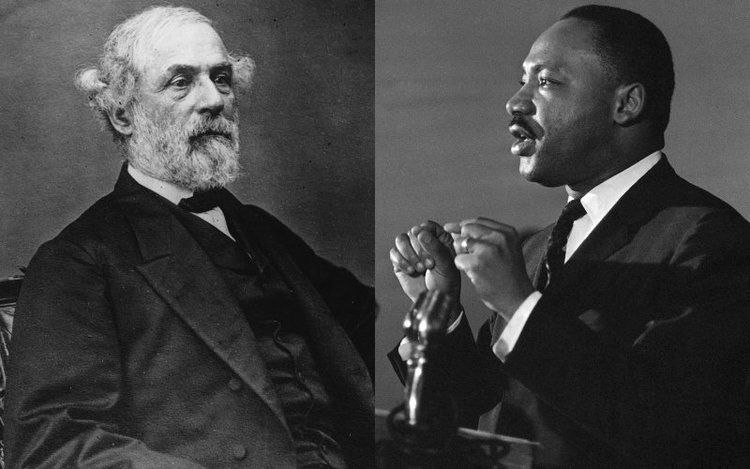 Happy Robert E. Lee Day! His January 19 birthday was once widely celebrated across the South (it still is mentionable in Alabama) but during the Second Reconstruction has been quietly suppressed to the point where even such a devoted son of the Confederacy as American Renaissance’s Jared Taylor was unaware, when I talked to him on Sunday night, that its local variant in his and Lee’s state of Virginia, Lee-Jackson Day, was supposed to be celebrated last Friday. (Not surprisingly—it seems to have been recently crudely scrubbed from Virginia’s webpage).

But there’s a silver lining, sort of, in this tale of attempted historical lobotomy: it shows that public holidays come—and they go. Martin Luther King Day, rushed through Congress with Obamacare-style disregard of process in 1983, has been by now weighed in the balance for almost thirty years. It has inarguably (but unmentionably) been found wanting. It is time for it to go.

And in fact, I believe it will go, or at least be quietly suppressed like Robert E. Lee Day. The reasons:

The President. We'll know in about 35 years, won't we?

No, I don't fault Senator Helms' sincerity with regard to wanting the records opened up. I think that he's motivated by a feeling that if we're going to have a national holiday named for any American, when it's only been named for one American in all our history up until this time, that he feels we should know everything there is to know about an individual. As I say, I don't fault his sincerity in that, but I also recognize there is no way that these records can be opened, because an agreement was reached between the family and the government with regard to those records. And we're not going to turn away from that or set a precedent of breaking agreements of that kind.

Sir, what do we do then in 35 years if the records are opened and we find that Dr. King was a Communist sympathizer? Do we then try to undo the law? I mean, I'm not quite certain where the logic is there.

The President. The logic is there in that there is no way that this government should violate its word and open those records now.

At the time, there was much MSM hyperventilating because Reagan had not roundly rejected the idea that King had Communist connections [Not A 35-Year Question, Editorial, New York Times, October 21, 1983]. But this was simply a demand, now familiar, for religious conformity to the burgeoning King Cult. Reagan’s was the only rational position, especially given the (widely-known but little-reported) information that Senator Helms had already placed in the Congressional Record.

Note, also, the bizarre MSM claim (which Reagan sidestepped) that there would be no “logic” in revoking MLK Day if King turned out to be a Communist. To put this in perspective, consider the protracted and merciless persecution, then just getting underway, of Arthur Rudolph, creator of the Saturn V moon rocket, because of the discovery of his alleged connection with forced labor projects in World War II Germany.

More recently, consider the continuing campaign against GOP Majority Whip Steve Scalise—who now, not coincidentally, is being attacked for his votes against the King holiday: GOP House Majority Whip Steve Scalise tried to kill Louisiana resolution apologizing for slavery, by Scott Kaufman, Raw Story, January 15, 2015. What Kaufman calls Scalise’s “ties” to David Duke’s relict organization in Louisiana were, on any reading, infinitesimal compared to King’s relationships with Communists and their causes. And when Scalise gave his speech, the U.S. was not engaged in a global struggle with a white supremacist power, nor losing thousands of men in a desperate war against one of its allies.

All this and serial adultery too.

But whatever embarrassments these files may contain—and chilling as it seems to those of us who were around at the time—only twelve years remain before they will be opened. Of course, the way things are going, criticizing King may then be considered Hate Speech.

The victim of the attack had been riding home from Parkway Academy School near Dover when the assault reportedly began. The video shows him sitting alone, facing front, when the attack begins from the rear – and continues from the side and the front of the school bus. “I didn’t do nothing,” he protests.

Just another day in the life of white America in the aftermath of the Civil Rights revolution —Flaherty has chronicled scores of similar stories. But one entry in the comment thread, and the reaction to it, was really significant:

I noticed that the School Bus driver failed to intervene or notify the police. It is shockingly evident that we need to create a segregated public school system where the victims of racial violence are separated from their abusers…

Fifty years after the Civil Rights Act, the sophisticated arguments of its opponents go undiscussed, but the simple reality that drove segregation seems to be winning it a new generation of supporters—albeit silent, for now.

From Selma to Birmingham to Detroit, the results of the Civil Rights revolution have been uniformly catastrophic.

The worst racial conflicts since the 1960s are being used to launch a new campaign of Leftist activism. But, although there has been little overt opposition, the election returns make clear that American whites just aren’t buying it.

How long will they continue to buy the Holiday?

Many Americans unquestionably thought that, if they just made this one symbolic concession of accepting Martin Luther King Day, they would then be left alone. (They probably think the same about homosexual “marriage.”)

But it hasn’t worked put that way. Martin Luther King Day has simply become a staging area for the inculcation of more white guilt, above all in the class room.

Thus when my son Alexander was eight, he came home from public school early in January and told us that he'd been in some kind of play to dramatize an African American being turned away from a restaurant in the bad old days of the segregated South. In honor of Martin Luther King Day. Sort of like a Christmas Pageant. (Remember Christmas Pageants?)

The Connecticut Berkshires, where we lived, are a whitopia with absolutely no history of segregation whatsoever. Alexander was deeply puzzled. He was particularly impressed by the news that it was bad for policemen to use the word “boy.”

But this area of Connecticut was a hotbed of abolitionism. Those Connecticut farm boys joined up in vast numbers, and died in vast numbers, fighting to free the slaves. There was one famous regiment raised in Litchfield County: the 2nd Connecticut Heavy Artillery, which despite its name was an infantry regiment and which was shot to pieces at Cold Harbor.

There’s still a substantial blue collar population of colonial Yankee stock in northwestern Connecticut. The woman who cut my hair, the man who delivered my mail, had relatives who died in that battle. They were aware of it—but I have never heard any mention of it in the public schools.

I asked teachers about it, I asked the principals about it. None of them had ever heard of it, although they certainly had children in their classes whose ancestors were involved.

Those children could have been taught, even accepting the conventional Civil War morality play, that their forebears had done a noble thing. Instead, they were taught that they, whites, had oppressed blacks—even though their forebears had specifically not done so.

This goes to the issue of what we mean by a "Proposition Nation". Maybe kids are being taught some kind of a "Proposition", a national creed, in the public schools. But what is it?

Writ large, the result of this sort of brainwashing can be seen in the ludicrous spectacle of the Republican Establishment stampeding away from Republican National Committeeman Dave Agema just because he reposted on his FaceBook page an article from Jared Taylor’s American Renaissance called Confessions of a Public Defender, by “Michael Smith.”

It made no difference that Agema apparently picked up the AmRen story from the website of black Republican and former Congressman Allen West, who wrote respectfully of it. Nor does it make any difference that Confessions is basically a straight description of scenes (admittedly dismaying) in heavily black courtrooms—bearing an unmistakable resemblance to scenes in Tom Wolfe’s 1987 best-seller Bonfire of the Vanities.

VDARE.com has defended Agema before, when he was under attack for being insufficiently enthusiastic about Muslim immigration. He didn’t resign then, and we hope he doesn’t resign now.

But the unfortunate reality is that debate about race has gone backward in the three decades that Martin Luther King Day has been celebrated—at least in part because of the emotionalism that it systematically exacerbates.

This emotionalism is not an accident. Just as the hyping of the Ferguson fiasco and the Trayvon Martin scam bear all the signs of a concerted campaign to rally the Left’s core voters, so the intensifying King Cult, and the regular Two-Minute Hates against race deviationists like John Derbyshire , Pat Buchanan, Frank Borzellieri, and James Watson, reflect the profound instability of American politics. As the Democratic Party tips away from whites, it can now only hope to form (to put it brutally) Obama-style Minority Occupation Governments. At all costs, the Left must keep the historic American nation from uniting before it is swamped by government-imposed non-traditional immigration—which it began to show alarming signs of doing (no thanks to the GOP leadership) in the 2010 and 2012 elections.

This comes naturally, because the Politically Incorrect fact is that neither the Left's black, Hispanic or Jewish components have any strong tradition of free speech. The question is whether they can cow the historic American nation into accepting its subjugation.

Diversity is not strength: it is weakness. The celebration of a deeply-flawed figure like Martin Luther King was a confession of weakness, and the attempt to turn him into a national role model has required unsustainable myth-making. Perhaps in the future, Americans will be allowed to celebrate their own races’ heroes separately, just as Italian villages have different patron saints. Right now, however, the cost of the King cult to white America is too high.