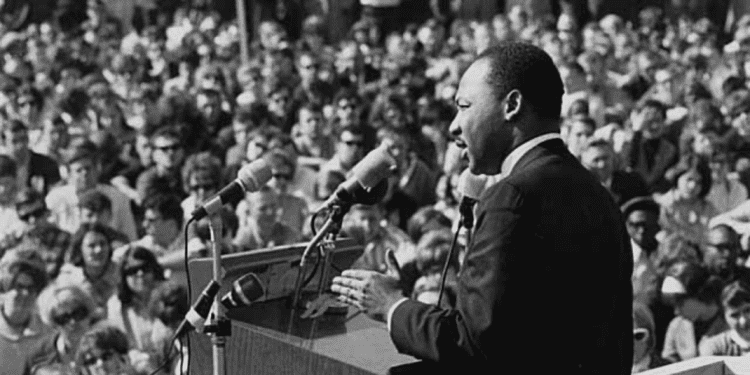 MLK vs. America In The Viet Nam War

Jesse Walker, managing editor of Reason Magazine, [Send him mail] quotes from Dr. King's sermon, (actually more or less a political speech, of course, as King admits himself in the prologue) delivered at Ebenezer Baptist Church on April 30, 1967, also here. King said, speaking while American soldiers were overseas fighting the Viet Cong, that

My third reason...grows out of my experience in the ghettos of the North over the last three years—especially the last three summers. As I have walked among the desperate, rejected, and angry young men, I have told them that Molotov cocktails and rifles would not solve their problems. I have tried to offer them my deepest compassion while maintaining my conviction that social change comes most meaningfully through nonviolent action; for they ask and write me, "So what about Vietnam?" They ask if our nation wasn't using massive doses of violence to solve its problems to bring about the changes it wanted. Their questions hit home, and I knew that I could never again raise my voice against the violence of the oppressed in the ghettos without first having spoken clearly to the greatest purveyor of violence in the world today: my own government. For the sake of those boys, for the sake of this government, for the sake of the hundreds of thousands trembling under our violence I cannot be silent.

To which Walker adds

King had more than one worthy dream.

Well, perhaps. But the dream here is of a Communist victory and American defeat in Viet Nam. The question wasn't whether the US would be "nonviolent toward little brown Vietnamese children" but whether it would continue to protect the men, women, and children of the late Republic Of Vietnam, from the Communist guerrillas and invading armies of Communist North Vietnam, none of whom were practitioners of Gandhian non-violence.

This is what led King to be known as pro-Communist, and is part of the reason so many people objected to the creation of a National Holiday in his name. [See The King Holiday and Its Meaning, by the late Sam Francis, for the history of this.] One of the things that shocked James Kirchick of the New Republic was the fact that a Ron Paul letter described Dr. King as""a comsymp, if not an actual party member..." Perhaps Kirchick, who just graduated from Yale, and is practically an infant, simply didn't know that this was in fact the case.

In the thousands of words of praise for Dr. King that are spoken in American schools, the words "pro-Communist" won't appear, but that's what King's dream was for Viet Nam.—and to a certain extent, for America, too.