Memo From Middle America | Musings On My Christmastime Trip To Mexico, Along With Millions Of Visiting Mexicans 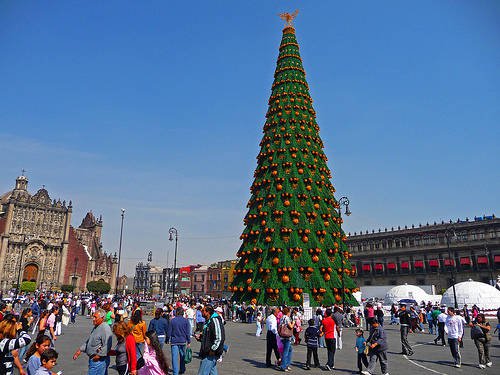 My family and I recently returned from our Christmastime trip to Mexico, and it was a good one. As I’ve pointed out before , Christmas (Navidad in Spanish-speaking countries) is a wonderful time in Mexico.

Millions of Mexicans residing in the U.S. return in December to visit relatives back in Mexico. Now, we are traveling the same direction. It gives me a chance to observe this phenomenon firsthand and, in a sense, to be a part of it.

And being part of it can also mean long wait times at the border.

This year, after we crossed the border, we had a ten-hour wait on the Mexican side, mostly in the process for my car permit. That’s because Mexico demands a car permit for all the U.S.-registered cars that enter Mexico. A fee must be paid and a deposit left at the border.

The putative reason is to protect the Mexican automobile industry from competition. But not coincidentally, the Mexican government makes a lot of money off the deal, after all, charging over $50 US for each car (that’s not part of the deposit).

For some reason, on the way back, crossing on the night of January 1st, 2015, there weren’t many people there and my wait was only about 40 minutes. It would’ve been even shorter had I not forgotten some documentation in the car.

ON December 21st, the same day my family and I crossed the border into Mexico, the INM (Instituto Nacional de Migración, Mexico’s immigration bureaucracy), reported in a bulletin that

So according to that report, as of December 21st there were 2.5 million “paisanos” who had crossed. Before all was said and done, there could have been more.

Obviously, the Mexican government makes a lot of money off Mexicans returning to Mexico during Christmastime.

Remember that the next time you hear a Mexican government official or diplomat going on and on about the plight of Mexicans in the United States and how we should let them in and let them stay.

Consider the many ways the Mexican government and elite profit off the Mexican immigrant presence in the United States:

And… By the way, as my 15-year old son pointed out, the Mexicans visiting Mexico drove nicer vehicles than we did! And these vehicles were laden down with consumer goods to distribute in Mexico.

What we’re seeing is a vast social phenomenon that is changing both our countries. And I don’t principally blame the immigrants. Your average Mexican immigrant in the United States is looking to further his own interests and those of his family, he is not a raving La Raza activist. Of course the Open Borders activists, cheap labor profiteers, Big Statists and Razistas north of the border are taking advantage of the presence of millions of Mexicans stateside to further their agenda. And the historical American nation must decide what its interests are.

What is going to happen to all these Mexicans in the U.S. who visit Mexico at Christmastime? Will they continue the annual trek at Navidad? Will their children?

If the U.S. and Mexico someday just merge into one big country will the car permit still be an issue?

On the other hand, if in some future time, the U.S. gets new leadership which actually cares about the border and controlling immigration, how will this affect the Christmas visits and the Big Picture?

While I was in Mexico, in the house of my wife’s parents (or my suegros as they say in Spanish, a handy collective term for one’s mother-in-law and father-in-law) a deliveryman came to the house. I wound up receiving the delivery. The deliveryman very quickly began speaking to me in English. We got to talking and he told me his interesting life story.

The deliveryman had been born in that Mexican city. At a young age, he had migrated with his family (apparently illegally) to a U.S. city, where he had resided some 40 years.

Three years ago, he got into some sort of (unspecified) trouble and was deported back to Mexico. He told me he’d had a hard time adjusting to the culture there (despite the fact that he was Mexican-born).

But, now he has a good job as a deliveryman for a recognized American delivery company you’ve probably heard of, and I wish him the best.

Open borders boosters would blame all such problems on our supposedly too-strict immigration system. But it’s really not the result of our system being too strict, but of not being strict enough, of allowing millions of people to enter our country, some legally and some illegally, and of failing to enforce the law across the board. That’s really what causes problems for people.

Anyway, there is a rocky road ahead regardless of what we do. Whether mass immigration continues or whether it is somehow able to be reduced or even shut down, there are rough times ahead.

Why not fight to reverse the Obama/Boehner Open Borders Madness? We need to control the border and we really ought to shut down legal immigration at this point in time. After that there are many loose ends to take care of, but at least we’re on the right track.