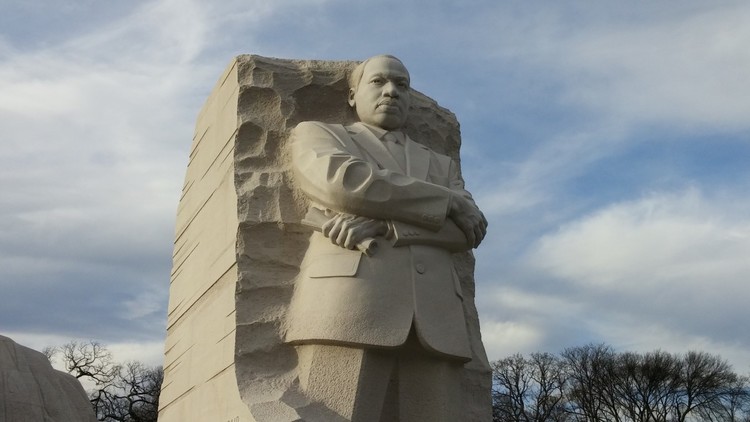 The monumental event that most Americans who live beyond our nation’s capital may have missed this week wasn’t the earthquake that struck last Tuesday or this weekend’s tropical blast from Hurricane Irene. It was the commemorative enshrinement of Martin Luther King, Jr. on our National Mall.

The only American to have a national holiday in his memory now also has a towering stone-carved made-in-China $120-million statue erected in his honor on the northwest corner of the tidal basin in West Potomac Park. No President or Founding Father has been conferred with such double honors.

King was 39 when he died from a single gunshot wound on April 4, 1968. James Earl Ray was convicted and sentenced for firing the bullet.

In the years since King’s death, damaging information from close associates, biographers, and federal sources has confirmed the extent of King’s philandering, Communist ties, and even plagiarism. The plagiarism revelations surfaced in the New York Times and Washington Post in November 1990 [How King Borrowed, by David J. Garrow, November 18, 1990]and were thoroughly documented in Theodore Pappas’s The Martin Luther King, Jr., Plagiarism Story (The Rockford Institute, 1994).

Nevertheless, the extraordinary ramp-up to Sunday’s official dedication, postponed due to Hurricane Irene’s wrath, included the unveiling of the memorial (Monday), “Honoring Global Leaders for Peace” (Wednesday), “Honoring Past, Present, Future Pioneers” (Thursday), “Partners in the Dream” (Thursday), “The Message in the Music” (Thursday), “Women Who Dare to Dream” (Friday), “Kennedy Center Celebration” (Friday), “Prayer Service at the Basilica of the National Shrine of the Immaculate Conception” (Saturday), “Dream Keepers” (Saturday), and “The Celebration” (Saturday).

Nothing was spared in the glowing Main Stream media coverage that flushed out every conceivable angle and spin (except critical facts about King’s unsavory character).

The MSM’s sycophancy included no less than 50 articles or editorials in the Washington Post alone—in just one week!

There was one slight deviation: an op-ed on the WP editorial page—left over from last year—noted that Obama’s “favorite quote”, often attributed to King and sewn into the rug of the Oval Office — “the arc of the moral universe is long, but it bends toward justice” — is not, in fact, King’s at all. According to writer Jamie Stiehm: “Theodore Parker, a long-gone Bostonian abolitionist and Unitarian minister, is the true author”..”[Oval Office rug gets history wrong, September 4, 2010] (In fact, as Pappas documented in his informative account, King’s plagiarism was rampant throughout his so-called “scholarship”).

This canonization of King, now a mythical figure to generations who have no memory of the era in which many Americans simply viewed him as a nuisance, is a triumph of fable over truth. King’s towering symbolism is a shrewd creation of Political Correctness and racial minority advocacy.

For all the talk of harmony and unity, the speakers for this week’s commemorative activities were overwhelmingly African American or Latino. Whites were conspicuously missing from the program.

Attorney General Eric Holder, with a straight face, claimed that the deficient scores of African American students was the result of unequal opportunities, that "there are communities where the doors to learning and job opportunities remain firmly closed; where the promise of equal justice is unfulfilled". But what were those billions of dollars worth of anti-poverty programs, Head Start, and federal educational funds intended for if not for those very communities?

There was a time when principled conservatives, such as Sen. Jesse Helms, James J. Kilpatrick, Murray Rothbard, Paul Gottfried, and others recognized King for the dubious and possibly dangerous symbol he was. Even John McCain voted against making Martin Luther King’s birthday a national holiday and originally stood by Arizona Gov. Evan Mecham’s decision to cancel the MLK holiday in Arizona.

Kilpatrick, in his opposition to the national holiday noted,

“These practical objections provide the least of the objections. Note that of the nine Federal holidays, only two honor specific individuals: George Washington and Christopher Columbus. We have no Federal holiday for such towering figures as Jefferson, Madison, and Lincoln.

“A decent sense of historical perspective should tell us that Martin Luther King, influential as he was in the field of civil rights, was no John Adams, no John Marshall, no Benjamin Franklin.”[Despite King's Merits, Holiday A Bad Idea, September 7, 1983] 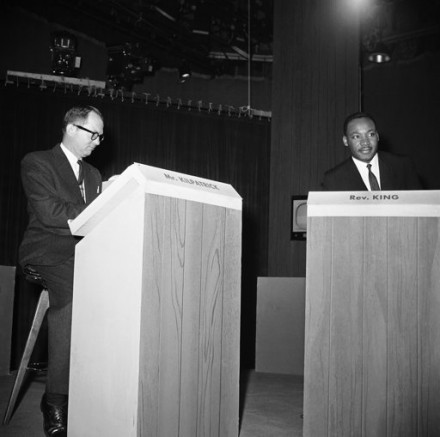 In his debate with King on November 26, 1960, Kilpatrick argued,

“We believe it is an affirmatively good thing to preserve the predominant racial characteristics that have contributed to Western Civilization over the past two-thousand years….”[Transcript PDF]

All of this is now forgotten. But it is not necessarily false.

The canonization of King has now reached the point of apotheosis.  But in the era of flash mobs, is it making us “free at last”?

Cooper Sterling [email him]  is a freelance writer in the Washington, DC area.