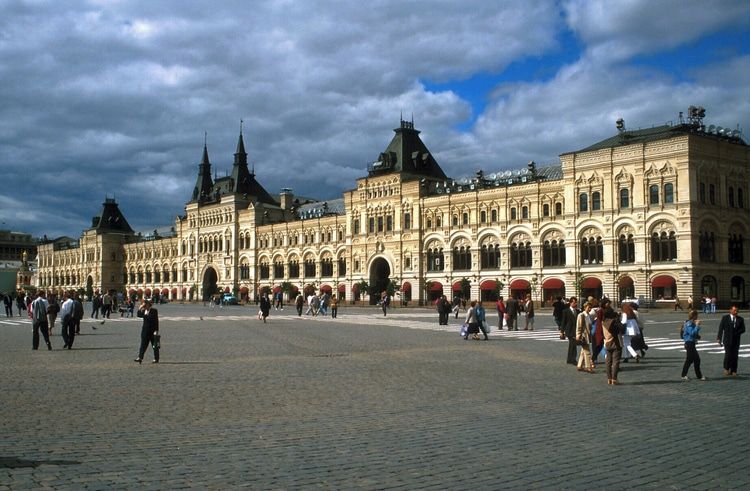 Empire of the Will (The Soviet Union In January, 1989)

IT IS EASIER TO UNDERSTAND the severity of the crisis that has pushed Mikhail Gorbachev into attempting a highly risky reform program when you actually visit the Soviet Union.

Snow and gloom were absolutely all-pervasive during the ten days a group of Western academics and journalists spent in the Soviet Union recently, on a tour organized by the Washington-based World Media Association. The sun didn't emerge until our train crossed the border into Finland. A coincidence, no doubt—and, after all, Moscow is on the same latitude as Hudson Bay and the Alaska Panhandle. But what surprised me, as a financial reporter and a first-time visitor, was the extent to which the gloom penetrated Soviet shops.

A stark truth confronts even the traveler restricted to the Potemkin cities of the tourist route: Successful space missions and nuclear weapons notwithstanding, the Soviet Union is really a Third World country.

Its endemic shambles and scarcity constantly infiltrate the international hotels, fortresses of relative civilization erected, as is typical throughout the Third World, by foreign mercenaries such as Finns and even Poles, and firmly guarded by doormen to prevent ordinary citizens from entering. Lights and bathroom fixtures don't work, and shower curtains and bath plugs go missing, as indeed do room reservations themselves. This is not a modern industrial society as we understand it in the West.

But you have to forage through the streets like a Soviet consumer, preferably under the guidance of an experienced shopper, to realize the full story. There is simply nothing to buy. The big GUM department store in Leningrad has the sparse and scruffy look of a church bazaar in a poor parish, except that the assistants are unsmiling. Food shops that might appear full at a casual glance from inside a diplomatic limousine actually contain nothing but three different varieties of canned squid. In the main street of Kiev, capital of the Ukraine, more than 100 people jostle in an eager line to buy an allotment of—four cartons of soap powder.

Informal contacts told us that Soviet living conditions have actually deteriorated in the last two years. And economic strain is visible in the exchange rate. The Soviets do not allow the import or export of their currency, and visitors are supposed to buy it at the official rate of $1.60 to the ruble. However, the black marketers who materialize whenever a tour bus stops—and in hotel corridors, and even in Red Square itself—are offering to buy dollars for 5 or 6 rubles each, up sharply from last year's reported rate of 4 to the dollar. Our record bid: 9.

Which suggests that the market now thinks the ruble is worth a mere 11 cents to 20 cents, and falling. (And in fact the Soviets announced in December that in 1990 they propose to halve the official exchange rate—even then leaving the ruble at 80 cents.)

But what does it suggest about the Soviet gross national product—how big, really, is the Soviet colossus?

Admittedly, we only caught glimpses of the military economy—we flew from Leningrad to Kiev on a gargantuan Ilyushin-86 airliner, with its peculiar internal configuration that our military experts said reflected its primary function as a troop carrier. Still, even if you assume that the Soviets spend in absolute terms as much on armaments as the Americans, that's only the equivalent of 7% of the U.S. gross national product. In the U.S. the consumer to a large extent is the economy. But where are the Soviet consumers' soap cartons?

"The consensus of American Soviet experts and the Central Intelligence Agency has been that the Soviet economy is around 60% of the U.S. economy," says Paul Craig Roberts of the Center for Strategic & International Studies in Washington, D.C. "But recently the Soviets themselves have published estimates that it's not larger than a third. I'm prepared to go so far as to say that, using market valuations, it may be as low as a fifth or even a sixth."

In order to match U.S. defense spending, in other words, the Soviets may have been devoting an astonishing 20% or more of their gross national product to their military.

Roberts, a former aide to Representative Jack Kemp (R—N.Y.), is now best known as one of the supply-side theorists behind the Reagan tax cut. But his early academic work was on the Soviet economy, arguing that it was not really planned but functioned as a perverted—and hence inefficient—market. He is currently working on a book about the Soviet economy and its Western observers, whose persistent credulity about Soviet achievements he attributes to their own antimarket bias.

"It's ridiculous when you can learn more from Soviet sources than from Western experts," agress Nicholas Eberstadt, a Visiting Fellow at the Harvard University Center for Population Studies. Eberstadt's new book, The Poverty of Communism, pieces together Soviet statistics to show that health standards in the U.S.S.R. appear to be deteriorating, extraordinary for an industrialized country. Soviet health levels, Eberstadt says, are about those associated with Latin American per capita output: "It's sort of a militarized Venezuela."

Much in the Soviet Union is profoundly impressive. We found ordinary Russians spontaneously offer to help inarticulate strangers. We saw no hint of street crime and no public drunkenness, the latter said to be endemic pre-Gorbachev. (We saw no public drink either, for that matter, suggesting the problem may not have been solved so much as repressed by the simple expedient of removing both alcohol and alcoholics. But either way, it beats New York.)