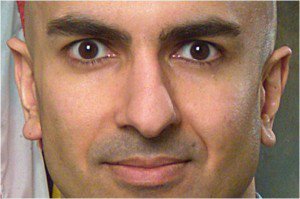 CA 2014 Gubernatorial Loser Kashkari: NOT the face of the GOP

The key to Ron Brownstein’s latest National Journal article is the headline: Demography Is Not Destiny for Democrats January 14 2015

Growing racial diversity is transforming a lengthening list of congressional districts, but not providing as much political benefit to House Democrats as many in both parties expected only a few years ago…

…the GOP remains doggedly competitive in seats where the minority population is either slightly above, or slightly below, its national average. In fact, in the new Congress, Republicans will hold a majority of the seats in which minorities represent at least 30 percent and no more than 50 percent of the total population.

Perhaps because according to the credits he has co-writers, Brownstein seems much less willing to discuss dispassionately the racial polarization of the American party system than he has in the past, for instance in 2011 as analyzed by Steve Sailer for us in National Journal's Ronald Brownstein Confirms Sailer Strategy. Steve said then that

What was new about Brownstein's article...is the metanews: the concept of “the white vote” is becoming a part of the conventional vocabulary.

As I've been pointing out for, roughly, ever: that development is an inevitable product of the much-celebrated demographic transformation of America.

This time Brownstein spends a great deal of space toying with the more congenial argument that the GOP performance is due to partisan redistricting:

The GOP had complete control of the line-drawing in Texas, Florida, Georgia, North Carolina, Virginia, Louisiana, South Carolina, Alabama, and Oklahoma: In the new Congress, Republicans will control 60 of the 94 seats in those states where minorities equal at least 30 percent of the population.

By contrast, in California, New York, Illinois, Maryland, New Jersey, Arizona, Mississippi, Nevada, Colorado, Connecticut, and New Mexico—states where either Democrats, a divided state government, or a neutral process drew the lines—Democrats will control 87 of the 112 seats where minorities cross that population threshold.

But ultimately Brownstein has the integrity to face uncongenial reality:

The key to the Democrats' loss of Congress, as we reported here, is their near-total collapse in heavily white seats, particularly those blue-collar places with fewer white college graduates… Democrats will hold 146 of the 235 seats where minorities equal at least three-tenths of the total population, or 62 percent. That's down significantly from the 84 percent they controlled of the 109 seats that fit that definition in 1993.

He reluctantly concedes that what enables the GOP to prosper is

In the three elections since 2010, Republican congressional candidates have amassed their highest level of white support in the history of polling, in each case attracting about three-fifths of those voters. The margins have been especially lopsided in several of the Sun Belt states where diversity is growing fastest: While state-level House results are not available, exit polls in both Texas and Georgia, for instance, found that last year's Democratic Senate candidates attracted fewer than one in four white voters.

Those big advantages among whites have powered the GOP to a crushing lead in preponderantly white districts: While Democrats as recently as 2009 held nearly half of seats where whites equaled at least 80 percent of the population, Republicans now control 97 of those seats, compared with just 18 for Democrats. At the same time, particularly in the South, Republican margins among whites have reached heights towering enough to withstand, often easily, a rising tide of Democratic-leaning minority voters in the diversifying places.

I suggest that the partisan redistricting effect claimed above would disappear when adjusted for the fact that the GOP Establishment in many non-Southern States spurns the white vote - as I noted in To California GOP Leadership (Again): LOSE WHITE VOTE, LOSE STATE!!! That is why Democrats do better there in the >30% minority Districts.

Brownstein’s essay meanders off to finish in a swamp of happy talk about GOP outreach to non-Whites, but the punch line is disapprovingly delivered well before the end. Even where the GOP is faced with

‘...a rising tide of Democratic-leaning minority voters… They can win those districts because they are racially polarized in their voting patterns," says University of California (San Diego) political scientist Gary C. Jacobson, an expert on Congressional elections.

Expressing exactly this thought got VDARE.com banned from Free Republic 15 years ago!

As far as elections are concerned, the only thing Republicans have to fear is the GOP Establishment itself.

Getting their preferred policies actually implemented is a different matter.

Patrick Cleburne [Email him] is a writer and editor for VDARE.com.