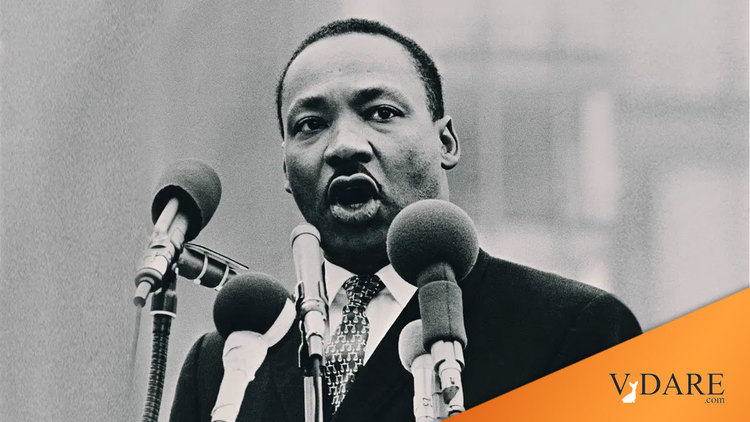 I'm sitting here looking at photo of Emmett Till in his coffin. He has one eye and a mouth that is a jagged gash. His hair is mostly gone and it's obvious that something has been eating his flesh. Pre MLK America didn't need redemption [see "Did Pre-MLK America Really Need Redemption?" by Paul Gottfried]; it needed destroying and thank God that it was.

Peter Brimelow comments: I know I'm supposed to feel guilty about this, but (possibly because I'm an unassimilated immigrant) I don't. Instead, I wonder what the four white victims of the December 2000 Wichita Massacre looked like.

In 1994, the last year I looked into in detail, there were 1,140,000 acts of single-offender violence committed by blacks against whites (not including murder). Of these 173,374 were robberies, 30,000 were rapes, and the rest were assaults, simple and aggravated.

In the same period, whites committed 135,360 violent crimes against blacks, of which 5,400 were rapes, 11,186 were robberies, and the rest were assaults, simple and aggravated.  [PB note:“whites” includes Hispanics, for some reason known only to Federal government statisticians.]

For murder, I have numbers for 1997. That year, there were 15,289 murders. 1,100 whites were killed by blacks and 480 blacks killed by whites. This means the average black was about 15 times more likely to kill a white than vice versa.

VDARE.COM does not, as it happens, advocate lynching. But it cannot be denied that Till was lynched for what would now be called the sexual harassment of a white woman. And elementary math suggests that, in the almost five decades since his death, up to 1.5 million white women may have been raped by blacks. Perhaps 50,000 whites may have been killed.

In my unassimilated way, I wonder when we'll see a Till-type PBS Special about this.