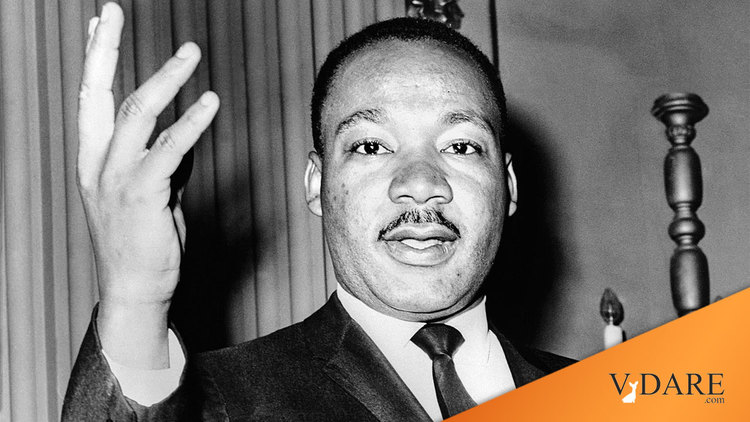 Peter Brimelow writes: In the FrontPageMagazine.com symposium that Paul Gottfried mentions below, we had an exchange about Martin Luther King with the interlocutor, Jamie Glazov. I thriftily reproduce my comment here, in honor of Martin Luther King Day:

Brimelow: As a practical matter, this effort to make King a “hero – for all Americans” is just not working out. Here in rural New England, for example, the public schools have made him a more important figure than George Washington. My little boy has been drafted into Christmas pageant-type things about the evils of segregation since he was in kindergarten. As there are no blacks and no history of segregation in this area, the net effect is simply to inculcate vague white guilt of a sort that would drive David Horowitz nuts.

Ironically, not merely was there no segregation in this area, but it was a hotbed of abolitionism. The local farmboys formed a famous regiment that was shot to bits at Cold Harbor. My son certainly knows some of their descendants (none of this Proposition Nation nonsense here). Yet this story is never mentioned. I have never found a public school teacher who has heard of it.

For these people, the King cult represents a species of historical dispossession. I don't think King can bear the symbolic weight our interlocutor wants – not merely because of King's personal failings (adultery, plagiarism, fellow-traveling etc.) but also because he quite probably didn't believe all that tactical color-blind rhetoric himself. That certainly is the argument of Michael Eric Dyson's book I May Not Get There With You.

Paul Gottfried remembers the unredeemed America – and Americans. For more on King, read Marcus Epstein's brilliant analysis on (where else?) Lew Rockwell.com.

Martin Luther King has replaced Jesus Christ as the central figure in human redemptive history. This year's Holiday Season, as Christmas is now called, brought forth a torrent of neoconservative moralizing about King and the civil rights movement. One standout illustration: the December 12 syndicated column, “Trent Lott Must Resign,” in which Charles Krauthammer told us what America is about. Krauthammer proclaimed that, by daring to praise the presidential run of Dixiecrat Strom Thurmond, now-disgraced Mississippi Senator Trent Lott gave “evidence of a historical blindness that is utterly disqualifying for national office.”

The civil rights movement, as led by King, was, according to Krauthammer, the defining moral moment in modern America. Indeed, King had made us morally whole:

“The point is not just what King and his followers did for African Americans, but what they did — by validating America's original promise of freedom and legal equality — for the rest of America. How can Lott, speaking of 'all these problems over all these years,' not see this?”

One reason for Lott's apparent blindness (if we might attribute to this senator a clarification he may be too dim or opportunistic to offer) was that King was not just asking for legal equality but for a good deal more – such as black political empowerment, racial reparations, and a socialist economy. In 1983, President Reagan and nearly a quarter of the Senate balked at the idea of proclaiming a national holiday for King, given his private vices, Marxist-Leninist affiliations, and relative unimportance compared to America's founders. During King's life and even after his death, moderate conservatives William Buckley, Frank Meyer, James Burnham, and – my mentor – Will Herberg spoke scathingly about King as a dangerous, Communist-controlled rabble-rouser. Were they all guilty of “historical blindness” and therefore unfit for “national office”?

Paralleling Krauthammer, FrontPageMagazine.com's James Glazov, in the course of somewhat immoderately moderating the webzine's January 10 symposium on “White Nationalism,” asserted that it was King who lifted us above

“…not only the terrifying and inhuman suffering of black Americans at the hands of racist whites, but also the darkness that all of America was submerged in because of racism. That King put his life on the line to bring justice in this tragic area of American life I consider heroic.”

I understand that Glazov was born after those dark ages had passed – and, moreover, in Russia. (Coincidentally, Krauthammer was also born abroad, in Uruguay.) As someone who was born in the U.S. and was around during the dark ages, I don't recall them being quite as dark as we are now told.

Years before King's supposedly redemptive death, whose assassination not surprisingly set off a wave of black violence, I went to school and played ball with black teenagers in Bridgeport, Connecticut. Contrary to the current Authorized Version, my black classmates were neither victimized nor denied legal equality. One of them, our junior class president at Bassick High School, Sammy White, lived in a two-parent family, and, like others of his race in that pre-MLK era, bore no perceptible animosity toward whites.

When my parents and I went into New York, we saw blacks and whites eating in the same restaurants and attending the same public and recreational events. Perhaps this was an optical illusion, of the kind that pagans suffered when they imagined they were looking at pagan apparitions. Although segregation did exist in the South, it was not a political institution elsewhere, despite the fact that blacks, like Italians, Irish, Hungarians, and Jews, had their own neighborhoods.

From my youthful trips in Southern states, I discovered that blacks there were indeed segregated. But this situation seemed less appalling to me – perhaps I had not been sufficiently sensitized – than the Auschwitzian oppression that everyone now assumes was the lot of blacks in the antediluvian South.

Of course, my parents had escaped the real Auschwitz.

Violence certainly accompanied the civil rights revolution, which included an invasion of the South by civil rights activists and the federal military. But the isolated violence inflicted on activists pales in comparison to the black savagery, directed against whites and other blacks, which has characterized American urban life since the late sixties.

Black conservatives Walter Williams and Elizabeth Wright have made the same judgments about the relative situations of black society before and after the civil rights upheaval.  (See Wright's publication Issues and Views)

Note I am not offering a defense for legal segregation. What bothers me, as always, are the neocons, who echo the PC hysteria of their leftist comrades. Although they never stop glorifying America as an abstraction or “promise” – or more recently, as a war-making machine – they appear to despise America as it actually existed before they and their friends took over.

What neoconservatives like is America as a grab-bag of rhetoric, or as a multicultural cuisine and domestic service industry that exists for their pleasure in New York and D.C. The American people who inhabited the country until recently seem as alien to them as the horsemen of Outer Mongolia.

Neoconlet Max Boot is right when he observes in Wall Street Journal (January 2, 2003) that neoconservative has come to mean “the kind of right-winger a liberal wouldn't be embarrassed to have over for cocktails.”

Why should they? Outside of shrieking anti-Semitism against those who don't fancy their imperialism, these eminently inevitable “conservatives” are identical to those who invite them to cocktails.

Let them drink a toast to St. Martin together. They all deserve each other.

Paul Gottfried is Professor of Humanities at Elizabethtown College, PA. He is the author of After Liberalism, Carl Schmitt: Politics and Theory, and Multiculturalism And The Politics of Guilt: Toward A Secular Theocracy.