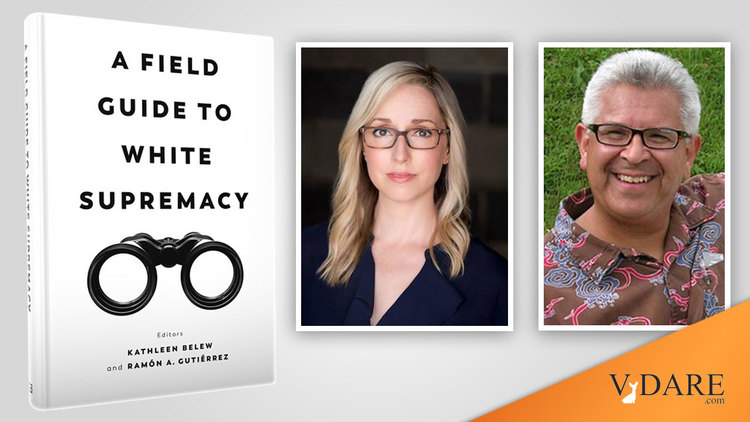 “But there’s been this mainstream fear of demographic change that has run through what we might call mainstream politics as well. I’m thinking, in particular, of in the 1990s.”

“And in 1995, you have this book that’s written called “Alien Nation.” And the author is Peter Brimelow. At the time, he was the senior editor of Forbes Magazine. He was also an editor for National Review, so a very mainstream journalist, whose book is a pretty racist tract against nonwhite immigration. He himself was an immigrant. I mean, what do you make of this history of fear of demographic change and how it gets mainstreamed in politics.” [Emphasis added]

Curiously, neither academic seems to have noticed that at the time the New York Times reviewed Alien Nation respectfully, not once, but twice.

Belew is coeditor (with elderly Hispanic professor Ramón A. Gutiérrez—note superfluous accent marks) of A Field Guide to White Supremacy, a “pretty racist tract” in favor of nonwhite immigration, and against the Historic American Nation.

The editors’ overview of “White Supremacy” is revealed in their chapter headings to include most of American history.

The first chapter links Indian fighting and the prevention of slave revolts with deporting illegal Mexicans, the second links the 1790 Naturalization Act with Donald Trump’s plan to end Muslim immigration, and the last links the Philippine Insurrection, the Vietnam War, and “Donald Trump’s racist rhetoric and the [actually black driven] spike in hate crimes against people of Asian descent” in the era of the China Virus.

Here’s what I mean about the authors thinking all of American History is “white supremacist”—this photo and its caption, from Section I: Building, Protecting, And Profiting From Whiteness Section One: 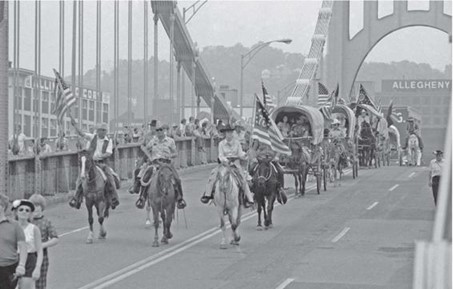 A wagon train in honor of the nation’s bicentennial crosses the Allegheny River in downtown Pittsburgh, Pennsylvania, headed for Valley Forge and the nation’s two hundredth birthday celebration on June 14, 1976. The Bicentennial Wagon Train began on the West Coast and traveled east, reversing the course of settler colonialism to commemorate the nation’s history. (AP Photo/Harry Cabluck)

So it’s all racist, all of American History—although presumably none of the Indians with scalping knives, Filipinos with bolos, or Viet Cong with RPGs were racist, that’s only for whites.

In keeping with demonization of American history from 1794 to Donald Trump and beyond, the demonization extends to Peter Brimelow’s immigration journalism from the nineties.

In Alien Nation, anti-immigrant journalist Peter Brimelow argued that Americans should change immigration law to protect America’s white ethnic core from Latino immigration: “Race and ethnicity are destiny in American politics…The American nation has always had a specific ethnic core. And that core has been white.”67

In the early 1990s, the conservative magazine National Review, which arguably helped build the alt-right, carried essays by Peter Brimelow, John O. Sullivan, Lawrence Auster, and others who regularly railed against multiculturalism and “Third World” immigrants (Auster 1994; O’Sullivan 1994; Brimelow 1992; Nwanevu 2017). Peter Brimelow was at the forefront of these pundits, and his essay “Time to Rethink Immigration?” was a diatribe against the negative ways immigrants, especially Hispanics, were changing America, ideas which he expanded on in his book Alien Nation: Common Sense About America’s Immigration Disaster in 1995 (Brimelow 1995, 1992). According to Brimelow, “Symptomatic of the American Anti-Idea is the emergence of a strange anti-nation inside the U.S.—the so-called ‘Hispanics’… Spanish-speakers are still being encouraged to assimilate. But not to America” (Brimelow 1995, 218–19). While concerned that nonwhite immigrants were changing America for the worse, Brimelow found that Hispanics were particularly troublesome because of biological and social reproduction issues. Brimelow targeted Hispanics as he railed against bilingualism, multiculturalism, multilingual ballots, citizenship for children of illegal immigrants, the abandonment of knowledge of English as a prerequisite for citizenship, the erosion of citizenship as the sole qualification for voting, welfare and education for illegal immigrants and their children, and congressional and state legislative apportionment based on populations that include illegal immigrants. [Emphases and links added throughout.]

And in discussing Paul Gottfried’s 2008 column frequently credited with naming the “Alt Right” [The Decline and Rise of the Alternative Right, Taki’s Magazine, December 1, 2008], Nicole Hemmer writes in Chapter 17 (The Alt-Right in Charlottesville:  How An Online Movement Became A Real-World Presence):

Fortunately, he continued, the generation of young professionals who made up the post-paleos had taken readily to those issues [The Bell Curve, H-Bd] and were sharing their work in outlets like Taki’s Magazine and VDARE, a virulently anti-immigration, white nationalist website.3

That goes to a footnote that says:

VDARE’s founder Peter Brimelow has worked to distance the magazine from labels like “white nationalist” in order to buy it more purchase in mainstream politics, but its content, name (short for Virginia Dare, the first “white” person recorded born in what would become the United States), and Brimelow’s own work fit the descriptor.

Can I say that the authors are once again getting poor Virginia Dare wrong—aside from the unnecessary scare quotes around ”white,” we don't allege that Virginia Dare was the first white child born in the Americas (that was either a Viking's child or a Spaniard) but, as they used to say, the "first white child of English parentage" or as Peter Brimelow put it in 2000, the “first English child “ born in the New World. That makes her the first American—because “America” is a cultural entity created by its English founders.

Note that the word “railed” meaning “to complain angrily” is used twice to describe Brimelow’s generally cheerful style, and “virulently” (meaning “poisonously”) once.

These are really common words for “anti-racists” to use. You never hear, for example, that Michelle Obama railed against something, though she does, or that Hillary Clinton used “virulent” language, although she does, and has for years.

“Railed” and “virulent” are used repeatedly, see below:

However, the words “settler colonialism,” which I consider actually virulent, appear too many times (21) to fit in a screenshot. Settler, meaning white people, appears 39 times.

What this all means is that the term “white supremacy” is actually meaningless—it’s just a currently fashionable word for “American.”

Back in 2015, an anomalous mass murder of blacks by a white named Dylann Roof led to Confederate flags being taken down because they allegedly represented “white supremacy.” After Charlottesville, in 2017, Trump pointed out that if you took down statues of Lee and Jackson, the Founders were next, and the MSM sneered at him [Statues of Washington, Jefferson Aren't 'Next,' But It's Complicated, Historians Say, by Dartunorro Clark, NBC News, August 18, 2021]. But it turns out he was right.

An interview with the New York Times (of which there is no audio record—it’s just his word against the hack’s) contained this notorious quote from Congressman Steve King:

At the same time, he said, he supports immigrants who enter the country legally and fully assimilate because what matters more than race is “the culture of America” based on values brought to the United States by whites from Europe.

“White nationalist, white supremacist, Western civilization — how did that language become offensive?” Mr. King said. “Why did I sit in classes teaching me about the merits of our history and our civilization?” [Emphasis added]

Before Trump, Steve King Set the Agenda for the Wall and Anti-Immigrant Politics, by Trip Gabriel, January 10, 2019

It’s fairly obvious that King, who is notoriously inarticulate, didn’t mean to defend old school white supremacy or even modern white nationalism—he meant “Why are people attacking Western Civilization and calling it these names?” He feels he was libeled through mispunctuation.

Well, the Washington Post has an answer to that:

Similarly, the Field Guide To White Supremacy in effect says that any product of white America or Western Civilization is white supremacist. All this and shoddy scholarship, shoddy writing, shoddy thinking too. Yet these people control the culture—for now.