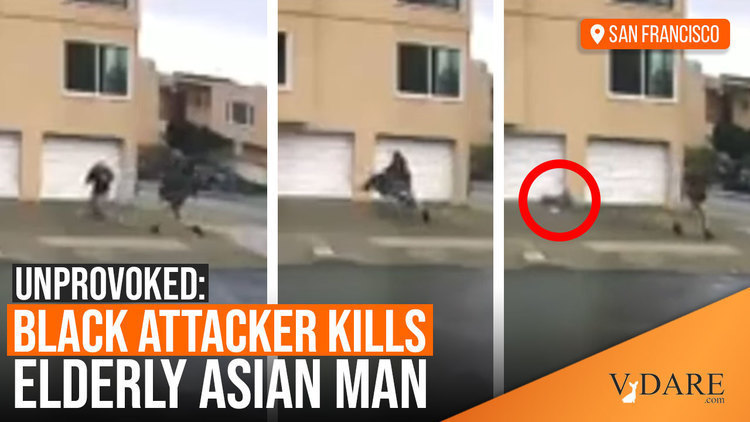 How To Write About Black-on-Asian Violence In The NYT: Blame Whites

Why Was Vicha Ratanapakdee Killed?

He was the elderly Oriental man who died in San Francisco when a black youth blitzed him from across the street last winter, which set off a period of concern about violence against old Asians, which diminished as it became apparent what race made up the majority of attackers.

His death helped awaken the nation to a rise in anti-Asian violence. For his grieving family, the reckoning hasn’t gone far enough.

For weeks, Monthanus Ratanapakdee urged her parents to please. stay inside. An uneasiness had hung over her ever since a mob descended on the Capitol early that month,

, though really, people had been acting crazy for a year. Throughout 2020, multiple strangers had come at her seemingly out of nowhere.

Strangers are obviously white. After all, whites make up the vast majority of the population in San Francisco.

That January, an old man yelled at her in Golden Gate Park — something about a virus and going back to her country — while she watched her sons, then 10 and 7, run in a playground. In February, two joggers, women, yelled something about germs at her older son as he played on a dock with a friend. In March, just before the country went into lockdown, a woman swung at Monthanus outside a hospital; she ducked the punch before running across the street. In November, another old man spat in her direction as her sons rode their scooters by the bay.

Obviously, Trump’s fault for talking about the China virus. After all, nobody ever heard of mentally ill people on the streets of San Francisco before.

When Monthanus talked about these incidents, how the outside world didn’t feel safe anymore, her father would ask, Is it really that bad? A petite 84-year-old with soft white hair, Vicha Ratanapakdee was a lifelong Buddhist, the kind of person who embraced the world with open arms.

… The footage is grainy and brief: A tall figure suddenly darts across a street and slams into a much smaller one; the smaller figure crumples onto the pavement and doesn’t get back up; the white baseball cap flutters to the ground, like a leaf falling from a tree.

Finally, in the 12th long paragraph, the author gets around to mentioning in passing the race of the killer:

Shortly after Vicha was pronounced dead, Monthanus’s phone rang. A homicide detective gave his condolences and said they were planning to charge the attack as a murder. Why would you call me when my father just died? Monthanus wondered at first, her mind thick with shock. She had learned small details about the suspect from her initial conversations with the police: male, 19 years old, African American.

Months before the country went into lockdown, Russell Jeung, a professor of Asian American studies at San Francisco State University, came down with a bad case of the flu. … But Jeung grew wary when a doctor asked him if he had recently been to China, and again when he learned that his relatives had been marooned at a hotel near the airport after being told they couldn’t board their flight back home. “Knowing what happened with SARS, how Asians were going to get shunned, harassed,” he says, referring to the 2003 outbreak, “I was just personally and sociologically alerted to racism.”

Jeung set up search alerts for “Asian American” and “discrimination.” The results confirmed his fears. In the United States and elsewhere, private schools asked their Chinese international students not to return for the spring semester; shopkeepers turned away customers who appeared Asian; Chinatowns emptied. In late January 2020, a man died outside a restaurant in Sydney after collapsing from a heart attack. “No one helped him because they thought he had Covid,” Jeung says. After reading about an Asian American teenager in the Los Angeles area who was hospitalized in February after being bullied about Covid, Jeung contacted colleagues at two advocacy groups in California. They asked the state attorney general’s office to help them track what they believed to be a growing number of episodes. “They said they didn’t have the capacity to track racism,” Jeung says. “So we created our own website.” (The California attorney general’s office collects data on hate crimes in the state but not other cases involving verbal harassment, for example, which often don’t constitute crimes.)

Within one week of the website’s start, Stop AAPI Hate received 673 reports of verbal and physical attacks, as well as other forms of harassment, like spitting, coughing and online threats. The submissions came from 31 states and the District of Columbia, with nearly half the reports originating in California and New York. “Even without much publicity, we have already received a strong response from the community, who want their voices heard,” Jeung wrote in the group’s first report. The number of submissions grew steadily throughout the year, reaching a total of 2,800 by the end of 2020. Then the flood came.

Two days after Vicha died, Eric created a GoFundMe page to raise money for the funeral, which included a photo of Vicha and a description of his assailant derived from a mix of facts and raw emotion: “A despicable 19-year-old thug that came to his neighborhood in a stolen vehicle and decided to prove how tough he was by brutalizing a senior citizen,” Eric wrote. “Now that Mr. Vicha Ratanapakdee has died of his injuries, prosecution for this murderous hate crime is the only path to justice and community safety.” Later, as more information trickled in, Eric changed “stolen vehicle” to “a car disabled by an earlier hit-and-run”; he also replaced “thug” with “adult male,” after watching an episode of “S.W.A.T.” in which a Black cop explained the word’s racist undertones to his partner. Eric, who grew up near San Jose, described himself as someone who never thought much about race during his upbringing. (His mother is Mexican, and he identifies as mixed race; strangers often assume he is white.)

He’s heartily sorry about racistly mischaracterizing the guy who murdered his father-in-law as a “thug.”

The next morning, Eric called the tip lines for several local news stations and left messages for reporters, inviting them to the Hall of Justice, where he and Monthanus were scheduled to meet with homicide detectives. That afternoon, the couple taped their first interview, with the KTVU reporter Evan Sernoffsky, near the courthouse steps. The segment ran with Vicha’s photo and the headline “Family of 84-Year-Old Killed in S.F. Believe Attack Was Racially Motivated.”

Vicha’s story joined a cluster of reports about attacks on Asian elders in four cities. Amanda Nguyen, a prominent activist, shared Sernoffsky’s report in a viral Instagram video, along with two others, one about a 64-year-old Vietnamese woman who was robbed in San Jose and another about a 61-year-old Filipino man whose face was slashed with a box cutter on the New York subway. “The mainstream media does not spotlight our stories enough,” Nguyen said into the camera, urging her vast following to share the story and tag CNN and MSNBC. “We matter, and racism is killing us.” When a video emerged showing a 91-year-old shoved to the ground in Chinatown in Oakland, Calif., the actors Daniel Dae Kim and Daniel Wu posted a $25,000 reward for anyone who had more information on the suspect, tweeting, “Remember Vincent Chin,” who was beaten to death by two white men in Detroit in 1982.

Vincent Chin is the Emmett Till of Asians.

… Then, on March 16, a white gunman in the Atlanta area drove to several businesses and shot eight people to death. It was the deadliest mass shooting in the country in more than a year. Six of the victims — two women of Chinese descent, four women of Korean descent — worked at the businesses targeted by the gunman, an unequivocal sign for many of those watching that he acted out of hatred, misogyny and racism.

… In March, Jeung says, Stop AAPI Hate received roughly 2,800 reports, about the same number he received in all of 2020. “We don’t know how to attribute this rise in reporting,” he told me. He believes that the attacks on the elderly and the Atlanta shootings led more people to file reports. But he also suspects that the numbers reflect an animus that only deepened during lockdown. “It’s been a year of pent-up anger and frustration directed toward Asians,” he says. “There’s been a half-million deaths. People are grieving. I think a lot of that grief and anger and scapegoating continues to be directed toward Asians.”

Or blacks have been committing far more violent crimes and getting themselves killed in car crashes much more ever since the Racial Reckoning was declared.

New images have continued to surface on a weekly, sometimes daily, basis. Some assailants have yelled slurs while throwing a punch or slashing at their victims with a knife. Others have injured or killed people without saying a word. These stories have prompted continuous news coverage and social-media obsession, and beneath it all there lurks a desire to understand what is driving the attacks — and how, exactly, race is playing a role.

The day after Monthanus and Eric’s first TV appearance, San Francisco’s district attorney charged Antoine Watson, the 19-year-old accused of shoving Vicha to death, with murder and elder abuse. Watson, the court documents state, had been cited for “reckless driving, speeding and failure to stop at a stop sign” in the hours before the attack. One witness at the scene told officers that he saw “a Black male, 18 to 30 years old,” approach and “stand over” an elderly man lying on the ground. Another witness said he heard a voice yelling: “Why you looking at me? Why you looking at me?” and then “a crushing sound.”

Watson pleaded not guilty. His public defender, Sliman Nawabi, challenged the murder charge, arguing that Watson did not intend to kill Vicha. Nawabi described the incident as an “impulsive unmotivated assault” that resulted from the mental-health breakdown of a teenager. He told me that Watson lost his job and support structure during the pandemic; in addition to attending college classes and working at FedEx, he had previously gone to therapy and taken medication. At Watson’s bail hearing, Nawabi said he recognized “the racial overtones” of the case, but added, “This false narrative that this is a targeted attack on the Asian community or an elderly man is misleading and prejudicial.” He asked the court to order a neuropsychological evaluation and proposed releasing Watson to home confinement, where his family could look after him, along with requiring therapy and counseling, so that Watson wouldn’t become “another statistic in the criminal-justice world.”

… That week, on Feb. 4, the couple spoke with San Francisco’s district attorney, Chesa Boudin, on a call. A former public defender, Boudin was part of a new wave of progressive prosecutors who entered office the year before with the promise of reform. Monthanus and Eric voted for him. Now they wanted action. “We were like, ‘Is this a hate crime?’ He was like, ‘I can’t talk about this,’” Eric says. “It was just the way that he answered the question that made me feel like he didn’t really care about our emotions, about what we were asking about.”

Boudin, who couldn’t discuss the particulars of the case, understood where Eric and Monthanus were coming from. “Any time a family suffers a violent crime, a homicide in particular, there’s questions,” Boudin told me. “Why did this happen? How could it have been prevented? Often, the natural human response is to want someone to blame for the pain that you’re experiencing.”

Such as the murderer.