The Fulford File | The “China Virus” Came From China And Chinese People. AND IT'S OK TO SAY SO

Earlier: Trump Is Right To Rebrand Corona As The "China Virus"

The Chinese say of themselves that they'll "eat anything with wings except an airplane, and anything with four legs except a table!" Brenda Walker quoted that from Food Around The World in 2010. And our John Derbyshire, who has lived in China, quoted the same thing in his 1996 novel Seeing Calvin Coolidge In A Dream, in which the Chinese narrator’s Chinese wife recycles “an old Chinese joke: The Cantonese will eat anything with four legs, except a table, and anything that flies, except a plane. It is not very funny in English, but people laughed politely.”

Is this racist? Well they say it about themselves, about each other. And they’re the same race.

The Novel Coronavirus, aka Corona, Wuhan Virus, or “Kung Flu,” came into being apparently via the unsanitary Chinese habit of eating live bats, etc., in the “wet markets” of Wuhan. This is not a racial characteristic, but a cultural one. People outside China don’t do it, much, but the whole world is suffering from it.

David Cole of TakiMag explained this on February 4, 2020 in a column Crazy Rich Asians Will Kill Us All:

There’s a quote I’m sure you’ve heard, and it’s usually attributed to Einstein (although he was far from the first to say it, and even he said it different ways at different times): “I know not with what weapons World War III will be fought. I know only this: World War IV will be fought with sticks and stones.”

Well, here’s a quote with only one author (me): “I know not the source of the next extinction-level pandemic. I know only this: White people will not be allowed to discuss it.”

Cole gave as an example an “anti-racist” polemic from James Palmer at Foreign Affairs magazine: Don’t Blame Bat Soup for the Wuhan Virus—Racist memes target Chinese eating habits, but the real causes of the coronavirus are more mundane. (January 27, 2020)

Palmer called this something “many Americans long believed,” rather than something that many modern Americans have actually seen in Chinatown or in the parts of the Orient to which US servicemen are sent by their government.

See this video from Las Vegas, which is one of the many you get when you Google “Chinatown and insanitary”—I suspect that there would be many more, but many news organizations will have said “local restaurant” for the same reason they say “Man Arrested.”

David Cole posted another article, with more research, on the Chinese health threat: The Chinks in Our Armor, TakiMag, March 17, 2020.

There’s a lot of suspicion on the right at the moment that Wuhanvirus is a bioweapon that was cooked up in a lab, but that kind of talk plays right into the hands of the Chinese, as it obscures the fact that Wuhanvirus was totally predictable (and thus avoidable). As the AP flatly stated in 2004, “Most flu strains start in China” [Asia is traditional cradle of influenza, February 2, 2054]. This is a simple fact. But now, because apparently reality’s not exciting enough, a lot of MAGA types are acting like it’s somehow suspicious that a virus came from China (next you’ll tell me that a koala came from Australia!).

“For much of the past century, Asia has been the cradle of influenza, including two of the three major human flu pandemics,” the AP reported sixteen years ago. “80% of the new human flu strains the last few decades appeared in China.” The scientists interviewed by the AP agreed on one very important central point: China is a flu breeding ground because of its customs regarding animal consumption and storage.

Claiming Wuhanvirus escaped from a lab lets the Chinese off the hook. They’ve had warning after warning that their customs and cuisine could kill us all. Three years ago, Smithsonian magazine ran an article that asked, “Is China ground zero for a future pandemic?” [by Melinda Liu, November 2017] and the answer was yes.

Smithsonian concluded that China is the likely source of the next major global pandemic, and again, the scientists were unanimous as to why: the animal cuisine and the country’s barbaric “wet markets” (for the record, the Smithsonian piece was written by a Chinawoman who was Newsweek’s Beijing bureau chief). [Citations added]

After SARS happened in 2003, a recurrence of China-born disease can be described as “predictable and predicted,” a phrase we’ve used repeatedly.

Cole’s headline, “The Chinks In Our Armor,” refers (despite the obvious double meaning which, under the circumstances, neither David Cole nor I will apologize for) to the fact that America’s obsession with not being racist can kill in so many ways.

It’s this obsession that I was talking about when I wrote “Civil Rights Law Doesn't Care If You Die” in 2008, about the many ways that anti-discrimination laws make people unsafe.

It’s what I was talking about in 2001, in columns called Er…Why Does Bush Have An Arab Bodyguard Anyway? and The Wall Street Journal And The Arab On The Airplane, in which we found that, two months after the attack on the Twin Towers, George W. Bush was being guarded by an Arab-American Secret Service agent.

When this Secret Service agent, carrying his federally-issued pistol, a copy of the book The Crusades Through Arab Eyes, and apparently incorrect paperwork, was refused boarding on a plane, Dubya, whose family has a lot of Arab friends/ business partners, reportedly responded:

“There's an inquiry going on as to specifically what took place," Bush said. But if he was treated that way because of his ethnicity, that's — that will make me madder than heck" [Bush Upset His Agent Was Booted From Plane, ABC, December 28, 2001].

Of course, it was crazy to have an Arab, especially a Muslim Arab, supposedly guarding the President. But apparently neither the head of the Secret Service detail nor the President thought that way.

In a crisis this big, we all need to think that way.

It’s a case of “live not by lies,” to quote Solzhenitsyn—coronavirus is a real crisis, not on the scale of the Spanish Flu epidemic of 1918-19, but pretty big.

The reason that crisis was called—and is still called—the Spanish Flu: It started in World War I, and all the Western countries engaged on both sides had censorship designed to keep up civilian morale and prevent the enemy from discovering a weakness.

Spain, which was not at war, didn’t have that kind of censorship. So when people started dying, they printed it in their papers.

We don’t have that kind of censorship now. But we do have “anti-racism”—and that’s what all the fuss about calling it the “China Virus/Wuhan Virus” is about.

For example, here’s a Tweet [archived] from a Chinese woman called Weijia Jiang [email her]. 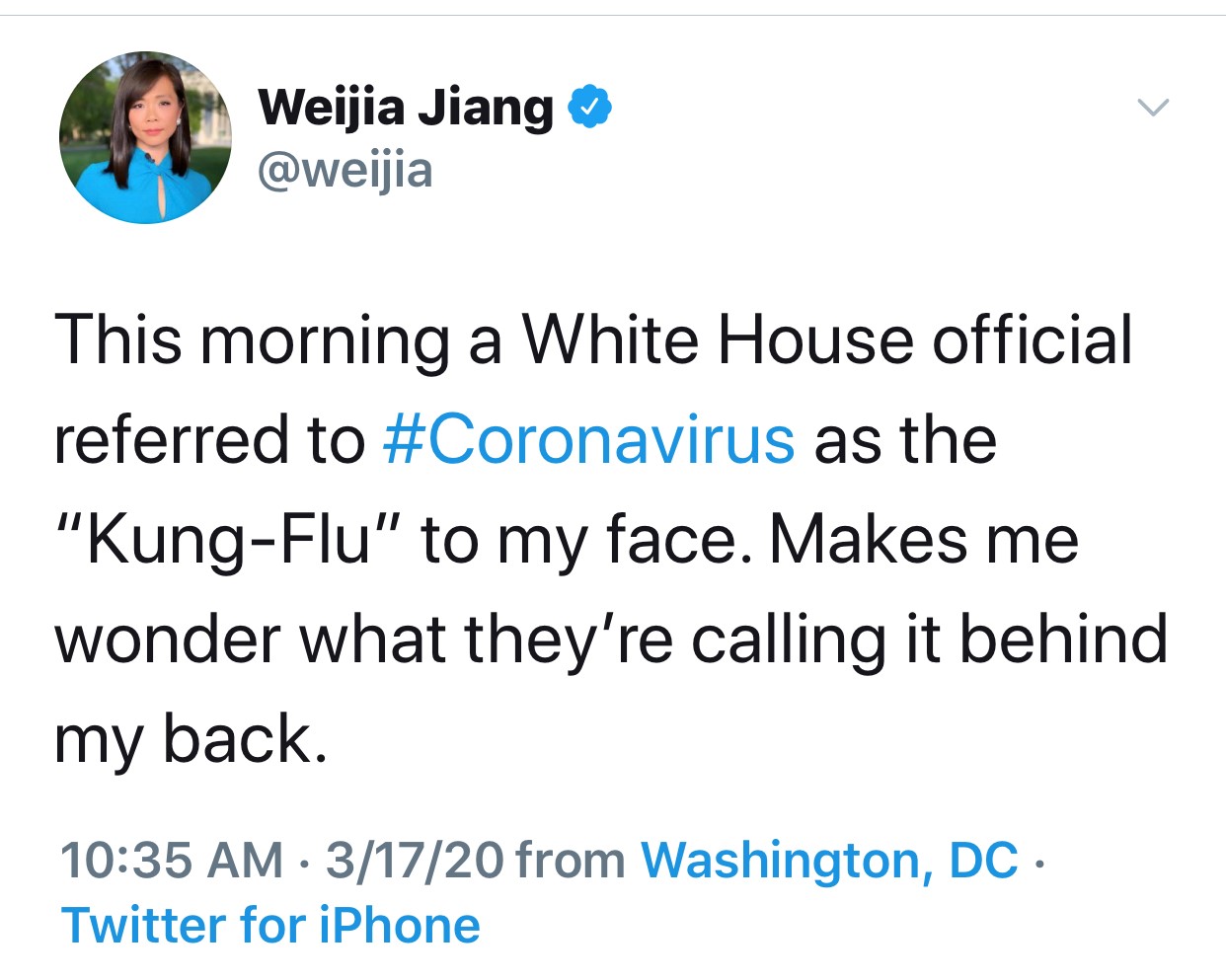 She’s obviously putting her Chinese birth and ethnicity well ahead of any loyalty she may have to the United States. (I’m not saying that any white male CBS correspondent would be in any way loyal to the US, but this is a different kind of thing.)

Most of the replies to this urge her to name the evil White House official, so he/she can be publicly humiliated. 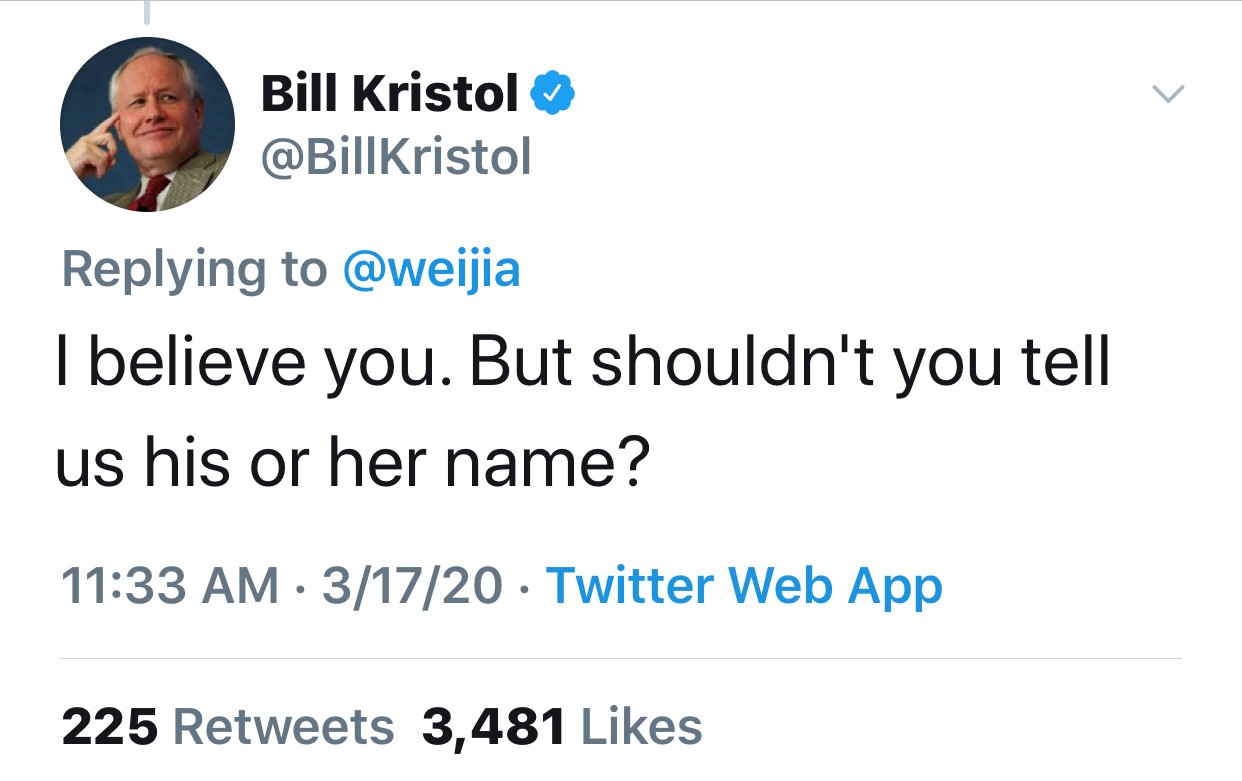 I assume, by the way, that if this exchange with a White House official happened at all, it happened like this:

Jiang: “Why is this being called the “China Virus?”

White House Official: “Because it comes from f---ing China. Tell you what, if you don’t like that, we can call it “Kung Flu.”

(The nickname goes back to SARS, and other Asian flus, and has been in the Urban Dictionary since at least 2005.)

"Because the term 'racist' is now so debased, I usually shrug such smears off by pointing to its new definition: anyone who is winning an argument with a liberal. Or, too often, a libertarian. And, on the immigration issue, even some confused conservatives."

Now, apparently, a racist is: anyone who’s dying of the China virus, but is not, as David Cole pointed out over a month ago, “allowed to discuss it” if he’s white.

It may be that this crisis is big enough to require the abandonment of the concept of racism entirely, though I doubt it. Too many people have too much invested in it.

However, this is not really about race. It’s about China’s culture, and about China as a nation-state which has been acting badly. China has a huge propaganda operation, and a lot more friends in Western media than Putin ever had.

It’s also true that you should be avoiding, not only crowds of people, but especially crowds of Chinese people.

They are statistically much more likely to have contacted a friend or relative from China, as Jared Taylor explains below in a video titled “Xenophobia Can Save Your Life”:

“Xenophobia” can save your life under conditions of a Chinese viral epidemic.

Abandoning the concept of “racism” might, in fact, save America.