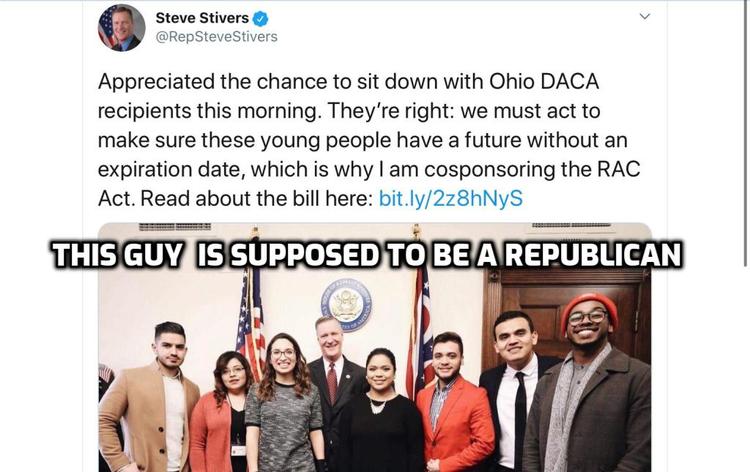 Key immigration patriot Iowa Rep. Steve King thought he had an understanding that he would get his committee assignments back last week, but GOP House leaders are now frantically signaling that won’t happen. This fight over King reveals that the venal Conservative Inc. Establishment that Trump was supposed to wipe away is still preventing the GOP from turning into a truly National  Conservative party—and, despite’s Trump’s example, remains cowed by the Main Stream Media’s Leftist Ideological Hegemony.

According to King, House Minority Leader Kevin McCarthy promised he could be restored to good standing if he could win over the Republican Steering Committee. King was stripped of his House assignments for a controversy over his defense of Western Civilization, when the New York Times deliberately mispunctuated the (admittedly inarticulate) King’s remarks to make him sound like a mouth-breathing goon from Central Casting. Let the record show the only Republicans who went to bat for him: Reps. Louie Gohmert, Brian Babin, Ralph Norman and Paul Gosar [‘It was a political lynch mob’: Steve King pledges to fight GOP over his exile, by Melanie Zanona, Politico, June 5, 2019].

King recently told an audience that he and McCarthy had “reached an agreement” that he might get some committee assignments. But then, like the Establishment snake that he is, McCarthy responded that the immigration patriot “cannot be exonerated” and won’t likely receive any committee appointments even if he does win re-election in November [McCarthy disputes Steve King's claim about getting his committee assignments back: 'I never said that', by Clare Foran and Manu Raju, CNN, May 15, 2020].

Other top Republicans chimed in. “I will not allow hate and bigotry to influence the legislation passed by Congress,” huffed Rep. Steve Stivers, then chairman of the National Republican Congressional Committee. “He will not be serving on any committee” Liz Cheney, the No. 3 Republican in the House and a GOP Princess by virtue of being the daughter of Dubya Vice-President Dick Cheney, agreed [Steve King makes new push for committee reinstatement despite racist remarks, by Melanie Zanona and John Bresnahan, Politico, May 13, 2020].

Stivers is a long-time virtue-signaler against King—and against immigration patriotism. He condemned King right before the 2018 midterms because he had backed Faith Goldy’s Toronto mayoral run and had met with Austria’s Freedom Party.

And King isn’t Stivers’ only immigration patriot victim. He also refused to support Republican Seth Grossman for New Jersey’s 2nd district in 2018 because Grossman had shared (perfectly innocuous) articles from VDARE.com and American Renaissance. Grossman lost in a district that Trump won. (But as luck would have it, the Democrat who beat him switched parties this year).

Perhaps the most remarkable thing about the GOP leaders’ Pavlovian bark to prove the anti-racist bona fides: they accepts the New York Times’ rendition of King’s remarks at face value after he showed that they mangled them, probably purposely [Memo: Fact Checking the New York Times Misquote of Steve King, SteveKing.House.gov, March 6, 2019].

Significantly, no recording of this exchange apparently exists (as King should have pointed out immediately).

The GOP surely knows the New York Times’s racket. So why not back their own man?

Aside from their utter terror at the thought of standing up to the usual Two Minutes Hate from the Mainstream Media and NeverTrump Neocons, Cheney, who has a career A from Numbers USA, is perhaps just motivated by social disdain for King, a distinctly Middle American Catholic.

But McCarthy and Stivers simply have donors who like cheap labor.

Stivers’ career B- from NumbersUSA is misleading. It’s worth reprising his record in detail:

Appreciated the chance to sit down with Ohio DACA recipients this morning. They’re right: we must act to make sure these young people have a future without an expiration date, which is why I am cosponsoring the RAC Act. Read about the bill here: https://t.co/NfjN0SzQtu pic.twitter.com/mtvWVdDoSs

Stivers should not be a high-ranking member in a party that purports to be America First. If McCarthy was a real leader, he would force Stivers and others to allow King to have his committee assignments back. It’s un-democratic to punish King and his constituents over one comment to the pathologically hostile New York Times.

McCarthy has mostly been a disappointment as House Minority Leader. The Watcher wrote in 2018 that McCarthy, a career B+ from Numbers USA,  showed promise as a potential nationalist leader. In that year, McCarthy proposed a solid wall bill, said diversity wasn’t our strength, and called out tech censorship.

Sadly, The Watcher was wrong. One of McCarthy’s first acts as Minority Leader was kneecapping King. "That language has no place in America," McCarthy said at the time. "That is not the America I know, and it is most definitely not the party of Lincoln” [House GOP leader: 'Action will be taken' after King's white supremacy comment, by Eli Watkins, CNN, January 14, 2019]

Bad as that was, what McCarthy said about the shooting of Ahmaud Arbery is worse.

An American citizen was gunned down while running in his neighborhood. Ahmaud Arbery's death has left a country mourning, demanding answers.

He was born on Mother’s Day, 26 years ago. My heart breaks for his mom, Wanda. We honor his story by calling for justice. #runwithahmaud

Disgracefully, the U.S. Chamber of Commerce, and the Republican Jewish Coalition and National Right to Life (?) support Feenstra and have helped him out-fundraise King by more than $500,000 [GOP rallies behind effort to defeat Steve King, by Jonathan Easley, The Hill, May 17, 2020].

But, as I argued last year, if King wins the party nomination, he will likely keep the seat. 2020 is shaping to be a much better year for Republicans in Iowa than in 2018. King’s main threat is cucked Republicans.

It will beyond idiotic if Republicans decide to shun King if he wins re-election or, even worse, back his Democratic opponent. McCarthy can show himself to be significantly different than his disastrous predecessor Paul Ryan and support King.

It’s time for the Business First Republicans to get this message. A King victory may finally deliver it.