Hillary Clinton that's comment that half of Trump's supporters are a "basket of deplorables" has gotten a lot of response. Megan McArdle here points out that it resembles both Obama's "cling to guns or religion" comment and Romney's comment that 47% of Americans are dependent on the government and will vote for increased benefits:

Era in which you flatter donors by saying grossly insulting things about large numbers of voters is long over. How didn’t Clinton know that?

Both comments were meant to be private and leaked.

Donald Trump is comparing it to the 47% percent comment. 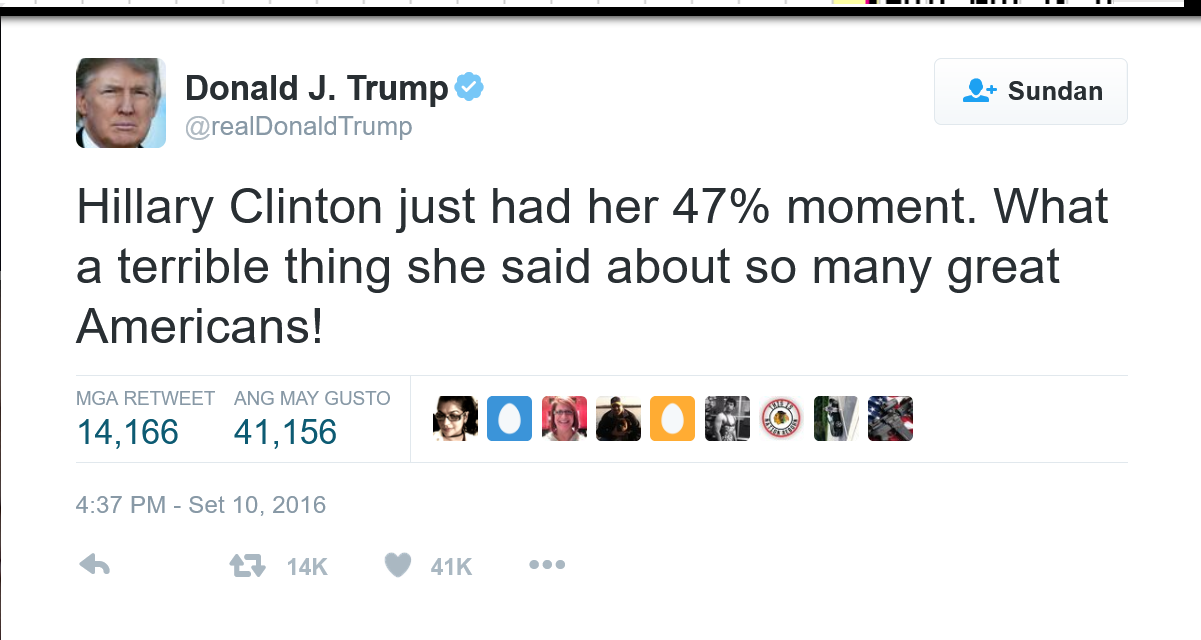 And he retweeted something Barack Obama said about Romney:

You don't have to like the guy or be voting for him to recognize that the troll-fu is exceptionally strong here. pic.twitter.com/45rC3Fut25

Donald Trump is leading one of the largest campaigns of white nationalism this country has ever seen and we are supposed to ignore it?

What they means is they've spent years saying normal is racist, and now they have a Presidential candidate who agrees with them. Here's an example of what Jamelle thinks is racism:

They found 60 percent of Republicans to say that blacks aren't more violent than whites? Either MSM suppression of black crime is working better than you'd think, or people are not telling pollsters what they think.

Here's a comment from Hunter Wallace, of the Occidental Observer:

He adds that "The #BasketOfDeplorables line was Hillary's botched attempt to merge with #NeverTrump". How botched? Bill Kristol thinks she's gone too far, and you don't often find Bill Kristol and Hunter Wallace on the same side of an issue:

Hillary Clinton's creed: "All men are created equal" -- except for those I've consigned to the basket of deplorables, who are irredeemable.

Kristol, as we keep reminding you, is the author of Y is for Yahoo [The Weekly Standard April 2006] in which he said

“How many Republicans will have the courage to stand up and prevent the yahoos from driving the party off a cliff?”

The problem is that in voter terms, there are a lot of "yahoos" out there. The majority of Americans agree with Trump on illegal immigration, and have for years. That's  what Hillary considers deplorable.