TalkingPointsMemo has a report on the Amren.com conference, and one of their young people (Mickey Kaus is fond of calling such pundits "juiceboxers") seems to think Peter Brimelow was calling for President Trump to do something illegal:

Asked if Trump could actually build a southern border wall, temporarily ban Muslims from entering the country and deport 11 million undocumented immigrants without congressional support, even Jared Taylor was circumspect.

“All politicians break promises,” he said. “That’s something we have to live with. I would prefer it that we had certainly about this but certainty is impossible.”

Taylor said he sees himself as “an old school stickler” who would prefer Trump carry out those proposals through legislation, but not everyone in the movement shares that reservation.

“Next time there are illegal alien demonstrations, round them up and ship them out,” Brimelow of VDARE.com proposed.[Emphasis added]

First of all, it's a slightly weird hypothetical to talk about President Trump doing all these things "without Congressional support"—after all, an electorate that elects Trump will probably give him  Republican control of both houses of Congress. (It's true there are a lot of disloyal Republicans out there, so passing bills won't be automatic.)

But Trump doesn't need Congressional support to do most of these things. And what Peter was proposing was what we've called  "Strategic Deportation." 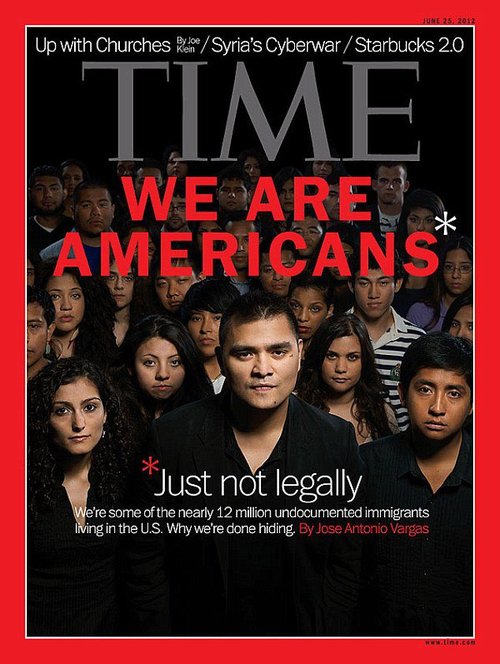 When you get an illegal openly defying the law by demonstrating or appearing on the cover of Time like Jose Antonio Vargas (right) the Federal Government can make an example of him. And it doesn't need any laws to be passed for that.

In 2006, I had the opportunity to speak to former Border Patrolman Bob Park, who as a young  man took part in Operation Wetback, in 1954. He pointed out that Eisenhower didn't have to pass any laws.

Being an illegal alien was already illegal. All it took was for the President of the United States to decide that something should be done, and then do it. By the way, this note was published in National Review at the end of Peter Brimelow's  Time To Rethink Immigration in 1992:

“At a Cabinet meeting today, Attorney General William P. Barr said nearly one-third of the first 6,000 [Los Angeles] riot suspects arrested and processed through the court system were illegal aliens, according to a senior Administration official. Barr has not proposed any special effort to have them deported, a Justice Department spokesman said.” —Washington Post, May 6, 1992

That was during the George H. W. Bush administration. I think Trump could do better than that.