Anti-white snuff films are now practically their own genre. The newest movie following in the footsteps of Machete and Django Unchained is Birth of a Nation, a loving tribute to the 1831 Nat Turner slave rebellion which led to the death of more than fifty white men, women and children.

Not surprisingly, it received a rapturous reception at the Sundance Film Festival.

Less than 24 hours after its roaring arrival at the Sundance Film Festival, “The Birth of a Nation” has made history with the biggest deal in the festival’s history.

Fox Searchlight has acquired world-wide rights to the Nat Turner biopic for $17.5 million — a whopping amount that reflects the movie’s critical and commercial prospects and the crowded field of bidders hitting festivals now.

It was clear from the movie’s premiere that it would go for big money. The audience gave the movie an extended standing ovation through the closing credits, and Nate Parker, who directed, produced, wrote and stars in the film, left the auditorium as Sundance’s favorite son.

Here are some highlights from historian Stephen B. Oates’s October 1973 American Heritage article, Children Of Darkness, detailing what the rebellion was like: 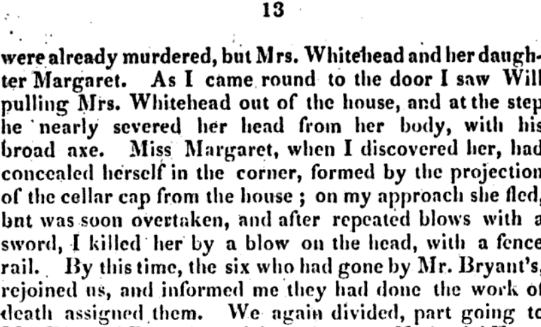 As Turner’s column moved relentlessly toward Jerusalem one Levi Waller, having heard that the blacks had risen, summoned his children from a nearby schoolhouse (some of the other children came running too) and tried to load his guns. But before he could do so, Turner’s advance horsemen swept into his yard, a whirlwind of axes and swords, and chased Waller into some tall weeds. Waller managed to escape, but not before he saw the blacks cut down his wife and children. One small girl also escaped by crawling up a dirt chimney, scarcely daring to breathe as the insurgents decapitated the other children—ten in all—and threw then bodies in a pile.

And so it went throughout that malignant night, as the rebels took farm after farm by surprise. They used no firearms, in order not to arouse the countryside, instead stabbing and decapitating their victims. Although they confiscated horses, weapons, and brandy, they took only what was necessary to continue the struggle, and they committed no rapes. They even spared a few homesteads, one because Turner believed the poor white inhabitants “thought no better of themselves than they did of negroes.” By dawn on Monday there were fifteen insurgents —nine on horses—and they were aimed with a motley assortment of guns, clubs, swords, and axes. Turner himself now carried a light dress sword, but for some mysterious reason (a fatal irresolution? the dread again?) he had killed nobody yet.

At Elizabeth Turner’s place, which the slaves stormed at sunrise, the prophet tried once again to kill. They broke into the house, and there, in the middle of the room, too frightened to move or cry out. stood Mrs. Turner and a neighbor named Mrs. Newsome. Nat knew Elizabeth Turner very well, for she was the widow of his second master, Samuel Turner. While Will attacked her with his axe the prophet took Mrs. Newsome’s hand and hit her over the head with his sword. But evidently he could not bring himself to kill her. Finally Will moved him aside and chopped her to death as methodically as though he were cutting wood.

With the sun low in the east, Turner sent a group on foot to another farm while he and Will led the horsemen at a gallop to Caty Whitehead’s place. They surrounded the house in a rush, but not before several people fled into the garden. Turner chased after somebody, but it turned out to be a slave girl, as terrified as the whites, and he let her go. All around him, all over the Whitehead farm, there were scenes of unspeakable violence. He saw Will drag Mrs. Whitehead kicking and screaming out of the house and almost sever her head from her body. Running around the house, Turner came upon young Margaret Whitehead [age 18] hiding under a cellar cap between two chimneys. She ran crying for her life, and Turner set out after her—a wild chase against the hot August sun. He overtook the girl in a field and hit her again and again with his sword, but she would not die. In desperation he picked up a fence rail and beat her to death. Finally he had killed someone.

Naturally, this film is basically guaranteed to be nominated for Best Picture, Best Actor, and Best Screenplay next year, killing three birds with one black stone named Nate Parker.

So what moved Parker to write his script? In between the standing ovation he received when he took the Eccles theater stage and the other “standing ovation that lasted through the credits, in what was arguably one of the longest standing Os in recent festival memory,” Parker had this to say:

“I made this film for one reason, with the hope of creating change agents. That people can watch this film and be affected. That you can watch this film and see that there were systems that were in place that were corrupt and corrupted people and the legacy of that still lives with us," said Parker. "I just want you, if you are affected and you are so moved, to ask yourself, 'Are there systems in my life that need attention whether it be racial, gender?' There are a lot of injustices."

Parker spoke about how he gave up acting for nearly two years to make the film, and the resistance he faced with getting it financed.

"It was very difficult, for so many reasons," he said. "I think any time we're dealing with our history, specifically with slavery, I find that it has been desperately sanitized. There's a resistance to dealing with this material."

What kind of change do you think he has in mind?

Ironically, 100 years ago the real The Birth of a Nation was released. This movie depicted white southerners banding together to protect their civilization against another program of “change,” radical Reconstruction.

That Nate Parker would select the same title used in D.W. Griffith’s immensely influential silent film is obviously intentional, but hardly necessary. Black-run Newark, New Jersey has already canonized Nat Turner with the Nat Turner Park (at its unveiling in 2009, President Obama sent a member of his administration to the ceremony) [Newark opens Nat Turner Park in Central Ward after 30 years, By Cullen Nutt, NJ.com, July 28, 2009]. Men like Turner are the heroes of the new anti-America.

And even the arch-leftists of Hollywood are having a hard time adjusting. Currently, the Oscars are under siege by spoiled black actors and directors who know they can count on the Main Stream Media to portray The Academy of Motion Picture Arts and Sciences as racist. Indeed, the Academy has already caved, pledging “to double its membership of women and minorities by 2020 through an ambitious affirmative action plan that includes stripping some older members of voting privileges.” It will also add three new seats to the governing board exclusively for women and minorities [Oscars' Film Academy pledges to diversify membership by 2020, CNBC, January 22, 2016].

A Los Angeles Times study in 2012 noted The Academy was 94 percent white and 77 percent male, publishing a follow-up piece in 2013 detailing the horror that The Academy had only dropped to being 93 percent white and 76 percent male. [Diversity efforts slow to change the face of Oscar voters, By John Horn and Doug Smith, Los Angeles Times, December 21, 2013].

(Of course, many of these whites do not identify as such. But that doesn’t seem to matter to blacks.)

And even this majority non-black Academy was eager to celebrate “diversity” at the 2014 Oscars. As the LA Times article stated:

John Ridley, an African American screenwriter who wrote the "12 Years a Slave" screenplay, took note of the irony: From all outward appearances, this is a banner year for diversity in Hollywood.

His film, directed by the black filmmaker Steve McQueen, received seven Golden Globe nominations, and other black-themed films including "Lee Daniels' The Butler" and director Ryan Coogler's "Fruitvale Station" are getting awards-season buzz.

But Parker’s The Birth of a Nation raises the stakes. It’s not just going to promote white guilt but black violence. There can be no doubt it will be celebrated by Black Lives Matter and its allies. One can only hope the movie doesn’t inspire those seeing the movie to duplicate Turner’s actions. Considering how blacks have responded to past anti-white incitement from both academia, the MSM, and the American Left, there’s little reason for optimism.

Post
Questions For Ken Burns: "Have You Ever Thought About Doing A Documentary About What Caused White Flight?"
MORE...
POPULAR TAGS