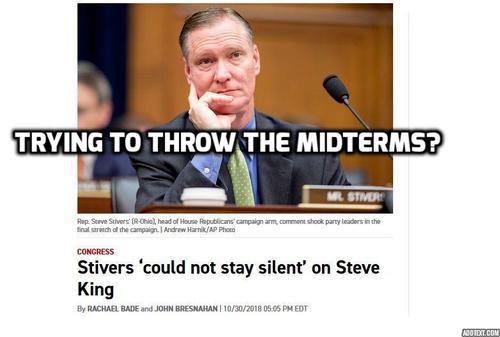 Both GOP and Conservatism, Inc. Come Out Against Steve King—Right Before The Midterms!

The Republican establishment and Conservatism, Inc. are rushing to disavow immigration patriot Steve King (R-IA)—right before the midterms.

“We must stand up against white supremacy and hate in all forms, and I strongly condemn this behavior,” Stivers added in his tweet.

Congressman Steve King’s recent comments, actions, and retweets are completely inappropriate. We must stand up against white supremacy and hate in all forms, and I strongly condemn this behavior.

This represents the most significant Republican denunciation of King yet. The attacks on the Iowa congressman have ramped up in recent weeks due to his endorsement of Faith Goldy and interactions with the nationalist Freedom Party of Austria (FPO). Even though the FPO is a member of the ruling coalition in Austria, reporters in America only know it as a party founded by a Nazi.

The Anti-Defamation League demanded on Wednesday that the GOP officially censure King. So far, the party leadership has been quiet, but one other Republican congressman has disavowed King. “[King’s] comments and his actions are disgusting,” Rep. Carlos Curbelo, a vocal immigration booster, said on MSNBC Wednesday. [Pressure grows on House GOP to denounce Steve King, by Scott Wong and Naomi Jagoda, The Hill, October 31, 2018]

Right before the NRCC condemnation, The Weekly Standard ran two hit pieces on King in late October. The first column declared King “America’s Most Deplorable Congressman” because he endorsed Goldy in her bid to be the next mayor of Toronto. “King and Goldy are both animated by the same brand of race-based identity-politics that consumes the alt-right. King’s focus on race and ethnicity is so consuming that it has become the core of his politics,” Weekly Standard editor Adam Rubenstein wrote. [Steve King: America’s Most Deplorable Congressman, by Adam Rubenstein, The Weekly Standard, October 17, 2018]

The next week, Rubenstein followed up with a screed attacking King for meeting with FPO officials and daring to mention “The Great Replacement” of Europeans in Europe. The Standard writer concluded that “racial politics is [King’s] only politics.” [Steve King Thinks Iowans Are Idiots, by Adam Rubenstein, The Weekly Standard, October 25, 2018]

Both of those articles were widely shared by conservatives. Now a few prominent conservatives are outright rooting for King to lose re-election. National Review senior writer David French tweeted, “Defeat Steve King” on Tuesday in response to a poll showing the Iowa congressman in a competitive race.

Daily Caller editor Amber Athey praised GOP efforts to condemn King because he’s an “idiot” and a “racist.” "I'm glad that they finally denounced him. The things that he's said in the past, the people that he's endorsed are simply inexcusable,” Athey told The Hill TV Wednesday. [Daily Caller editor praises GOP rep for condemning Steve King's 'inexcusable' actions, by Julia Manchester, The Hill, October 31, 2018] (Ironically, Athey spent much of the same day complaining that a libertarian student group condemned her “inflammatory” rhetoric.)

The King condemnations come at a strange time when the GOP is starting to embrace the patriotic immigration agenda and stand up to left-wing smear operations. There has been no better champion of that agenda than Rep. King, and Republican disavowals of him essentially denounce his policies as well.

It’s no surprise that Conservatism, Inc. would condemn King—they care more about earning liberal respect than winning. But it is a surprise for GOP leaders to do such a thing right before a midterm dominated by immigration. Let’s hope House Majority Leader Kevin McCarthy and others resist left-wing demands to attack their own side. They’ve got an election to win.