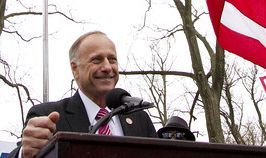 Despite MSM, Cuckservatives, The Smart Money Is On Immigration Patriot Steve King

Iowa Rep. Steve King (NumbersUSA career grade A+) is a lonely man in DC. Banished by the Republican Party and anathema to Conservative Inc., King is almost a party of one in Congress. He still has friends in the House Freedom Caucus, but the GOP leadership wishes he were gone. As of Sunday night, the betting site Predictit was offering odds of 6 to 4 that King will not be re-elected. Yet the smart money is taking the bet.

King’s ostracism is not due to any personal scandal or lack of commitment to conservative principles (including fierce support of Israel, which curiously does not seem to have protected him at all). It’s all due to his Politically Incorrect comments on immigration and race. VDARE.com, which does not believe in abandoning the wounded, has had to defend King repeatedly—see here, here, here, here, here, and here.

The good news: King’s constituents and local party still strongly support him. And a King victory in 2020 would be a tremendous triumph for immigration patriots and a defeat for the cuckservative GOP Establishment, to say nothing of its Main Stream Media handlers. Donald Trump has gone some way to remaking the GOP as a National Conservative party, but the treatment of King and fellow immigration patriots show there is still room for improvement.

It wasn’t too long ago that Rep. King was a respected figure in Republican politics. Several 2016 GOP presidential candidates begged for his support in the Iowa primary. Ted Cruz won the Iowa primary after receiving King’s endorsement [Ted Cruz Picks Rep. Steve King as a Campaign National Co-Chair, by Stephen Nuño-Pérez, NBC News, January 6, 2016]. King did not campaign for Trump in 2016, but the two men became close after the election and each praised the other [Steve King and Donald Trump: mutual fans and echoes, by Glenn Kesssler and Meg Kelly, The Washington Post, January 17, 2019]. “King may be the world's most conservative human being,” Trump said at a 2018 rally.

But things have changed since then. King has bravely spoken out against mass immigration and multiculturalism. However, statements he made before and after the 2018 election proved too much for spineless conservatives in the face of MSM huffing and puffing.

First, King endorsed VDARE contributor Faith Goldy’s bid to be Toronto mayor. Second, he met with members of Austria’s nationalist Freedom Party (which had won the election) while visiting Europe. During that trip, he questioned the value of diversity. This convinced many conservatives that King needed to lose to his Democratic opponent. Ohio Rep. Steve Stivers, then-chairman of the Republican National Committee, condemned King, and the Weekly Standard (R.I.P.) called King “America’s most deplorable congressman.”

But the GOP and Trump stuck by King in the race as he pulled off a close victory. His win, however, did not quiet his nagging detractors. A week after the election, the Weekly Standard claimed King called immigrants “dirt.” In reality, he made a harmless joke that the defunct conservative outlet willfully misconstrued.

The final straw: an odd quote from King that appeared in the New York Times in January: "White nationalist, white supremacist, Western civilization—how did that language become offensive?" he said.

That one sentence cost King the support of his own party. Congress passed a condemnation of his “hate,” GOP leaders stripped him of his committee assignments, and Conservative Inc. denounced him in the strongest terms possible. King insisted he was only defending western civilization and that the New York Times misquoted him. (No recording appears to exist.) It didn’t matter; he was now persona non grata with the GOP.

There’s no doubt that this has harmed King’s re-election chances. At least three primary challengers have announced they’re running, one of whom is a leading state senator in Iowa. King’s campaign is receiving few donations and had less than $20,000 on hand at the end of June [Steve King Is Broke And Has Been Abandoned by His Colleagues as He Runs for Re-Election, by Lachlan Markay, The Daily Beast, August 25, 2019]. He has received no donations from any PAC controlled by a sitting member of Congress and support from corporate interests groups has dried up. Instead, multiple corporate PACs are backing one of his primary challengers.

Only a handful of Republican lawmakers--such as Texas Rep. Louie Gohmert and Arizona Rep. Paul Gosar--have stood by King. ['It was a political lynch mob': Steve King pledges to fight GOP over his exile, by Melanie Zanona, Politico, June 5, 2019]. In one of his worst snubs, the notoriously cowardly Trump White House barred King from flying on Air Force One to an Iowa rally in June. [Steve King not allowed on Air Force One for Trump's trip to Iowa Tuesday, by Jeff Zeleny, CNN, June 11, 2019]. Yet King was the only Republican congressman from Iowa to survive the 2018 election..

King’s pariah status was reinforced last month after he made some odd comments about abortion. In an characteristically inarticulate statement, the Iowa representative defended the position that abortions in the case of rape and incest should be banned—which, of course, is in fact the traditional position of his Roman Catholic Church—by arguing that most people have ancestors who were the product of rape or incest. Once again, his comments drew widespread condemnation from his own party. Wyoming Rep. Liz Cheney, entitled Republican royalty by virtue of being the daughter of former Vice President Dick Cheney and a member of the House GOP leadership, said King’s comments showed why he doesn’t belong in Congress. [House GOP leaders condemn Steve King for 'appalling' rape comments, by Sarah Ferris, Politico, August 14, 2019]

The MSM has gloated about King’s travails. This week, it had a field day with his praise of the drinking water in border detention facilities. King, in typical form, was trying to prove a good point in the least optimal way possible. This time, he said the water he drank from the toilet was good. No, he didn’t actually drink from a toilet: the water fountain in these facilities is attached to the toilet. Regardless, journalists and Democrats had a good chuckle at King’s expense.

So the MSM/ Ruling Class hates King. The Republican Establishment hates him. Conservative Inc. hates him. Even though King is a staunch conservative on abortion, gun rights, and nearly every issue imaginable, he’s too “racist” for conservatives.

But The Atlantic just visited King’s rural Iowa district and found voters back him and his Politically Incorrect comments [Why Steve King’s Supporters Are Staying Loyal, by Elaine Godfrey, September 6, 2019].

“If we bring people from another culture here and overpopulate this place with people from a different culture, we won’t build up American culture,” Ida County Republicans chair Mark Leonard told The Atlantic. “Most people aren’t going to have an appreciation for what these folks on my walls [Civil War generals] went through.”

Atlantic’s Godfrey went to a local fair and met two dozen ardent King supporters. She said the supporters stood by King’s immigration views and dismissed accusations that he is a racist.

“What is a racist anymore?” Rocky DeWitt told her. “Racist in the liberal logic is just somebody that doesn’t agree with what you say.” DeWitt said that many of the immigrants who have come to his part of Iowa prefer their national flags instead of America’s.

Local residents said that a vote for King sends a message to the establishment and they’ve had enough of being called racists.

“We get ignored by Des Moines, we get flown over, and nobody pays attention to us. The manifestation of that is Screw you, here’s Steve King,” said a local newspaper editor who is no fan of King.

“By calling us stupid, deplorable, racist, and all those other names that they've come up with, it just turns you off,” another resident said

Local party officials reportedly back King, a factor that could him save him in a divided field. State law says that if no one wins at least 35 percent of the primary vote, the race goes to a convention. Those conventions are likely to be dominated by local party activists who still back King. The divided field itself may prevent one candidate from amassing all of the anti-King vote.

If King secures the nomination, the GOP’s infrastructure would likely support him—begrudgingly, however. The GOP is dumb, but it’s not dumb enough to sacrifice a crucial House seat for “muh principles.” Remember: Trump (if not the GOP Establishment) backed Roy Moore in the Alabama Senate run-off in 2017. King is free of political and sexual scandals. He will still have the support of the party if he wins the nomination.

FiveThirtyEight predicts that King will retain his seat if he wins the primary as his district is overwhelmingly Republican. [GOP Leaders Really Want Steve King Gone. Could He Lose In 2020?, by Geoffrey Skelley, FiveThirtyEight, August 20, 2019] He won a nailbiter in 2018, but that year was a blue wave. 2020 looks to be a much better year for Republicans in deep-red districts. Trump will be on the ticket and will bring more Republican voters to the polls.

A King victory in 2020 would be a triumph for immigration patriots, but it’s ridiculous that it’s even in doubt. He should be cruising to re-election. The Republican Establishment’s betrayal of him shows how much the party needs to improve.

And King is not the only prominent immigration patriot to lack Establishment Republican support. Kris Kobach’s bid to be Kansas governor in 2018 was opposed by many powerful Republicans [Two Former Republican U.S. Senators Endorse Kobach’s Democratic Opponent, by Ed Kilgore, New York, September 18, 2018]. His campaign for Senate in this election cycle is receiving even more pushback: “He’s the worst possible Republican nominee and no one knows it better than the national Democrats,” David Kensinger, chief of staff to former Kansas Governor Sam Brownback, has been quoted as saying [Could a Trump cheerleader and Republicans’ ‘worst possible nominee’ be the best for Democrats?, by Chris McGreal, The Guardian, August 8, 2019]. The National Republican Senate Committee and other powerful Republican groups are reportedly planning to undermine Kobach’s candidacy and help a more “electable” Republican. [Kansas’ Kobach is weighing a Senate bid. National Republicans are ready to stop him, by Lindsay Wise, Bryan Lowry and Jonathan Shorman, McClatchyDC, May 17, 2019]

Kobach nearly became Kansas governor in 2018. He lost due to that year’s blue wave and the failures of the last Republican governor, Sam Brownback. Yet, Establishment Republicans want to destroy a brilliant immigration patriot because they deem his views too “extreme”—i.e. distressing to the MSM/ Democrat complex (and, of course, to key GOP donors).

Trump won in 2016 by dispensing with Political Correctness and championing the policies King and Kobach have long advocated. Few Republicans were willing to stand strong on immigration in the pre-Trump era. Ironically, King’s political fortunes have soured in the era for which he paved the way. Sadly, Political Correctness is stronger than ever and Republicans still have not found their spines.

It’s imperative that King and Kobach win. Victory in the face of massive opposition may shake the GOP out of its cucked stupor. Both men would prove that populist-nationalism is bigger than Trump and the GOP would then have no other choice but to respond accordingly.

Middle America didn’t vote for Business First conservatism in 2016—they voted to put America First. Nobody exhibits this value more than Steve King and Kris Kobach.