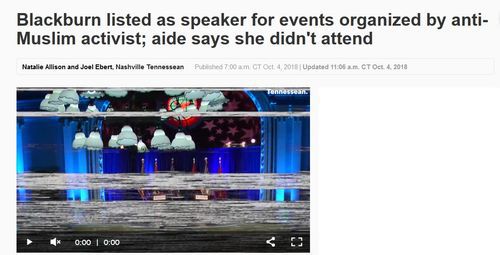 In a year of peak Democrat enthusiasm and astonishing Republican complacency, Marsha Blackburn is facing a tough race in her battle for the Senate seat in Tennessee. However, she's opened up a small lead in recent days, now beating her opponent Phil Bredesen by five points in the latest poll. [Poll: GOP's Blackburn leads Democrat Bredesen by 5 points in Tennessee Senate race, by Brett Samuels, The Hill, October 4, 2018]

Bredesen is also tacking right, signaling that he would support Brett Kavanaugh if he was in the Senate. [As key Brett Kavanaugh vote in U.S. Senate begins, Phil Bredesen says he supports nominee, by Joel Ebert, The Tennessean, October 5, 2018]

Therefore, journalists are seeking to sink Blackburn by using the same attack they used against Ron DeSantis. Specifically, journalists declare David Horowitz's Restoration Weekend a "hate group" based on the authority of the Southern Poverty Law Center and then blast Blackburn for speaking at it years ago.

U.S. Rep. Marsha Blackburn, the Republican nominee for Tennessee’s open U.S. Senate seat, has twice been on the list of speakers for a conference organized by an anti-Muslim activist group, and has met with leaders of a far-right Austrian political party with Nazi roots.

Blackburn, who has previously faced criticism for her association with a former leader of a neo-Confederate hate group, was listed as one of 20 confirmed speakers — including Milo Yiannoupolous and Steve Bannon — at the November 2017 Restoration Weekend, a three-day gathering hosted by the David Horowitz Freedom Center.

She is also listed as a confirmed speaker on a blog post outlining the agenda for the 2011 conference.

Of course, all it really means is that journalists Natalie Allison and Joel Ebert don't like Horowitz or Blackburn and feel if they point n' sputter sufficiently, it will hurt the Republican candidate.

Blackburn is semi-cucking, denying that she spoke at the 2017 campaign and thus far not answering if she spoke in 2011. Of course, the correct answer is saying that there's nothing wrong if she did.

Still, the best way to show this is a dishonest propaganda piece is to look at the journalists' treatment of the Austrian Freedom Party. It is described as a "far-right Austrian political party with Nazi roots."

In January 2017, Blackburn met with members of Austria’s Freedom Party, a far-right political party founded by one-time Nazi officers “whose leaders have continued to engage in anti-Semitism and Holocaust trivialization in recent years,” according to the Anti-Defamation League.

King, who has made racist remarks about Muslims and immigrants and who recently retweeted a neo-Nazi, is pictured next to Blackburn in the photo. He hosted the dinner held at the Capitol Hill Club, a Republican social gathering spot where Blackburn spent $652.97 that day, according to campaign finance filings.

Posing with Blackburn and King are Freedom Party leader Heinz-Christian Strache and others from the Austrian political party, including Norbert Hofer, a far-right candidate who unsuccessfully ran for president of Austria in 2016.

Facing criticism from outside groups, Freedom Party officials earlier this year appointed a committee of historians to assess its links to Nazis.

See if you can guess what's missing from all the screaming about Nazis. That's right! Heinz-Christian Strache is current Vice-Chancellor of Austria, not some random loon. Norbert Hofer wasn't a fringe candidate, but came agonizingly close to winning in a very controversial election marred by irregularities. He's also a minister in the current ruling government. The "far-right Freedom Party" isn't some irrelevant group, but part of the current ruling coalition led by Sebastian Kurz. In other words, the kind of people that government officials will want to meet with. Not printing any of this is lying by omission.

It's doubtful reporters, generally incapable of understanding ideas or performing a task other than copying and pasting leftists' press releases, know anything about Austria other than that there used to be Nazis there. Yet if these two do have more intelligence than the average journalist, it's hard to see their article as anything other than a deliberate attempt to deceive readers by withholding the most relevant information about the Freedom Party. Hopefully, the voters of the Volunteer State know better than to fall for this clickbait propaganda from the Opposition Party.