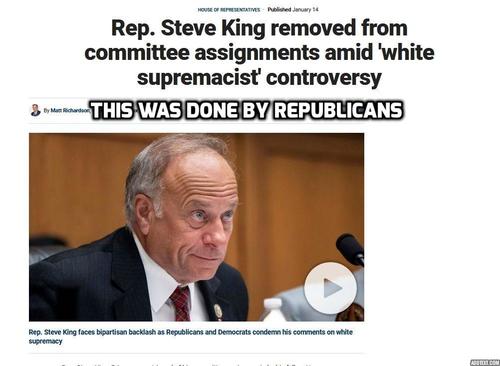 Trumpism Has Made Progress With GOP Leadership—But, As Steve King Atrocity Shows, Not Enough

An appropriate thought for Martin Luther King Day: the almost simultaneous Main Stream Media hysterias about Rep. Steve King and the Covington Catholic students are obviously driven by anti-white animus. But the reaction of the Congressional GOP (non-reaction in the case of Covington Catholic) shows that they still have no clue what’s going on.

When GOP congressional leaders stripped King of his committee assignments over a disputed quote in that impartial source, the New York Times, they made all too clear that the Trumpian transformation of the GOP is far from complete. The Main Stream Media decreed King’s remark racist—even, incredibly, if he was just defending Western Civilization as he insisted—so naturally Republicans had to punish him to appease their enemies. [Rep. Steve King removed from committee assignments amid 'white supremacist' controversy, by Matt Richardson and Chad Pergram, Fox News, January 14, 2019]

It’s the same old story that happens time and again with Republicans. The sad part is the man who led the charge against King is a Republican leader who, surprisingly, has come far to embrace Trumpism and immigration patriotism: House Minority Leader Kevin McCarthy.

I wrote that, unlike the then-House Speaker Paul Ryan, McCarthy had shown total loyalty to the President and has even adopted Trumpist positions that the GOP Establishment long detested. He supported for tariffs in spite of the Establishment’s free trade dogma. [Majority Leader McCarthy defends Trump tariffs, by Jacqueline Klimas, Politico, June 3, 2018] and was at the forefront of attacking Big Tech censorship in spite of the GOP Establishment’s fealty to corporate power. [Kevin McCarthy is trying to court the GOP base by bashing big tech, by Joe Perticone, Business Insider,  August 3, 2018]

McCarthy even said diversity is not our strength—defying the Ruling Class diversity cult. “We did not survive, grow, and become the most powerful civilization in human history because we were focused on our diversity,” he said in a speech at the opening of a New Religious Liberty Division at the Department of Health and Human Services. [YouTube, January 18, 2018]

But when it comes to defending Steve King’s free speech, McCarthy failed big league. The new House Minority Leader responded to this controversy like most Republicans do: loudly condemn, make some dramatic gesture of appeasement, and hope the MSM moves along. It obviously sets a terrible precedent for any Republican lawmaker who dares to be Politically Incorrect. But this is the bed McCarthy has made.

The bright side to McCarthy: he will continue to support the President’s immigration agenda and will likely not voice support for full-scale Amnesty.

The same can’t be said for the other well-known Republican who has made a Trumpian transformation: Sen. Lindsey Graham. Both McCarthy and Graham represent a GOP Establishment struggling to adjust to Trump and both men represent different paths the party could take.

McCarthy suggests a future where the party adopts Trumpist policy yet runs away from any comments the MSM deem “racist”—which, of course, could be just about anything. Graham suggests a future party that adopts Trumpian bombast but still tries to sneak in the Establishment’s discredited agenda of more wars and more immigration.

Graham is often Trump’s boldest defender in the Senate, and he recently demonstrated this by expressing support for the president declaring a national emergency to get the wall. Yet, this support is tangential on the President continuing talks with unpersuadable Democrats and temporarily opening up the government. [Lindsey Graham Urges More Border Wall Talks Before National Emergency Declaration, by Neil Munro, Breitbart, January 13, 2019]

This action is similar to most of Graham’s rhetoric and actions in the Trump era--and is why he must remain suspect in the eyes of immigration patriots.

Graham’s preferred way to resolve the shutdown is for Trump to grant permanent legalization both to recipients of the Deferred Action for Childhood Arrivals (DACA) program and thousands of migrants from Central America and Haiti living in the U.S. on temporary protected status in exchange for a measly $5 billion for the wall. [Lindsey Graham finds himself on the margins of shutdown negotiations, by Emma Dumain, McClatchy, January 4, 2019].

Even before the 2018 midterms made it harder for Republicans to make an immigration deal with Democrats, Graham urged his party to sell out the Trump base. In an appearance on Fox & Friends, Graham said Republicans should unnecessarily offer amnesty for Dreamers in exchange for border funding. [Lindsey Grahamnesty is back with a DACA deal Republicans would be fools to take, by Chris Pandolfo, Conservative Review] He dismissed the suggestion that Republicans should include patriotic immigration proposals, such as ending chain migration or mandatory e-Verify, in that proposal. The senator said they would be “poison pills” for Democrats and have to be excluded.

So why do so many Trump supporters fall for the delusion that there is a new Lindsey Graham in town?

The South Carolina senator won over many Trump supporters last year with his aggressive defense of Brett Kavanaugh during his contentious confirmation. Graham aped Trump himself in mastering the art of unapologetically “owning the libs.” He tore into the vile lies promoted by the media and the Democrats, he shook off crazed protesters with pizzazz, and he bullied Sen. Jeff Flake into voting for Kavanaugh.

Graham even offered this stunning response to Democrat attacks on him. “I’m a single white male from South Carolina, and I’m told I should just shut up, but I will not shut up,” Graham declared. Who would ever guessed that it would be Lindsey Graham to stand up to the Left’s hatred for white men?

It wasn’t too long ago when Graham spent all of his air time attacking Trump and wishing the GOP had kicked the future president out of the party. As an avid war hawk and immigration enthusiast, he could not stand Trump when he ran for office in 2016, but he exhibited a different tone as soon as the new president took power. [Graham: We should have kicked Trump out of the party, by Nolan D. McCaskill, POLITICO, March 7, 2016]

The Kavanaugh fight appeared to reveal a new Lindsey Graham. But Graham hasn’t actually conformed to the America First agenda at all, especially on trade on immigration.

Patriots should be very concerned that Graham’s embrace of Trumpian rhetoric is a ploy to better pursue the same old agenda he’s always pursued. He now has more power to do so as the new Senate Judiciary Committee chairman. As a close Trump ally chairing the committee, he would have more power to strangle good initiatives and insist on his own terrible immigration policies. [‘There’s a deal to be had’: Graham could revive immigration reform as chairman, by Burgess Everett and Elana Schor, POLITICO, August 2, 2018]

Graham will also likely oppose sensible immigration measures if they make their way through the Senate.

Graham already wields significant influence over Trump’s foreign policy and the president regularly seeks out his advice. It would be undeniably bad if the Senator elevated himself to shaping President Trump’s domestic agenda. [How Lindsey Graham Tries to Keep Trump Hawkish, by Conor Friedersdorf, The Atlantic, October 4, 2018]

Right now, the GOP Establishment has just shown what happens to genuine nationalists when they violate cuckservative taboos. The Trumpian transformation of the GOP is nowhere near complete, and even those who have changed in a positive direction, such as McCarthy, are still not to be trusted.

Trumpism is equally defined by its policy proposals and pugilistic style. So many Republican voters gravitated to Trump because he appeared as the one fighter amid a field of cowards. The base loves anyone who takes on Leftists and journalists. But Trumpism will be ultimately useless if it degenerates into Jeb Bush’s platform mixed with one-liners owning the libs. It would also not be good if the GOP embraced Trump’s policies but lacked his guts. There’s no way patriotic immigration reform would be enacted if Republicans caved anytime journalists screamed “racist!”

if it wants to have a future, the Republican Party must embrace Trumpism in both substance and style.

Endnote: Both McCarthy and Graham enthusiastically backed Trump's shutdown offer on Saturday, January 19 that would protect hundreds of thousands of migrants from deportation in exchange for a few billion for the wall, although it certainly went nowhere near as far as Graham has been advocating. Both lawmakers said it would be a good step in reforming our "broken immigration system"--a phrase frequently heard from Amnesty advocates.

Their support further indicates the lack of Trumpian progress among both Republican leaders. Yet Graham also provided evidence supporting my theory that Trump's offer was just a political ploy to expose Democratic extremism. He tweeted: "To reject this offer — Out of Hand — tells me that it is not about the quality of the proposal, but Democrats' desire for President Trump to fail," Graham said in a tweet.

To reject this offer — Out of Hand — tells me that it is not about the quality of the proposal, but Democrats' desire for President Trump to fail.

It’s not that Trumpism has made no progress with these people. But it could still go either way.