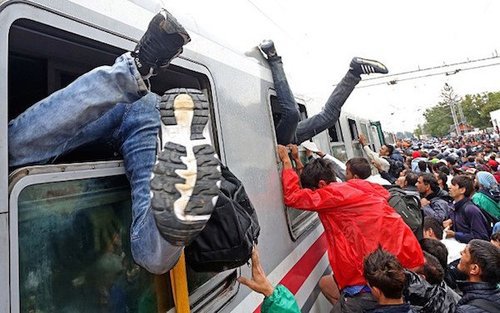 Representative Brian Babin appeared with Sean Hannity recently on Fox News to discuss the issue of Syrian refugee resettlement in America, which the administration intends to crank up to as many as possible.

There are millions who want to come, and hundreds of thousands from Africa, the Middle East and Asia are flocking to Europe in a tsunami of mostly Muslim third-worlders who want a first-world life with lots of free stuff.

Congressman Babin posted a press release about his legislation:

Washington, DC – U.S. Rep. Brian Babin (TX-36) yesterday introduced the Resettlement Accountability National Security Act (H.R. 3314), which places an immediate suspension on allowing immigrants into the United States under the refugee resettlement program, until the Government Accountability Office (GAO) completes a thorough examination of its costs on federal, state and local governments.  According to the U.S. refugee admissions database, nearly 500,000 new immigrants have come to the U.S. under the resettlement program since President Obama first took office – with the state of Texas and its taxpayers being asked to take in more than any other state.

“It is extremely unsettling that the Obama Administration would continue to expand the U.S. resettlement program at such an irresponsible pace in light of our economic and national security challenges,” said Rep. Babin. “While this program may be warranted in certain situations, it is continuing at an unchecked pace.  For the past decade the U.S. has been admitting roughly 70,000 new refugees a year, with little understanding of the economic and social costs on our communities. . . .

HANNITY: Politicians are now calling on Americans to help by allowing an increased number of migrants right here into the US, but amid security concerns a US Congressman has introduced legislation that would halt the intake of new refugees until America’s migrant resettlement program is fully audited and the security risks have been assessed.

Here now to discuss his new legislation, Texas Congressman Brian Babin is with us. While James Clapper, the head of the National Intelligence, and our State Department have both said the same thing, that ISIS and al Qaida will infiltrate the refugee population. So doesn’t that mean that the risk is there and we can’t ascertain whether they’re genuine refugee or an ISIS fighter?

BABIN: That’s exactly right, Sean. There is no way to vet or screen these people coming out of the Middle East, and all we have to do is look at Western Europe, the failures of their refugee program and then we’ll look at ours — we’ve already taken five hundred thousand refugees in the last six years of President Obama’s administration, and less than five percent of those have been the most persecuted group of all and that’s Christians.

And so I think it’s high time that we look at this with an 18.6 trillion dollar national debt, what this is going to cost us. Ninety percent of these refugees are going to be on federal welfare programs. And then we look and see exactly what’s happening from a national security standpoint, it’s a disaster. We’re going to invite the problems and turmoil of the Middle East inside the United States, and this is just an open door for ISIS to establish bases of operation at taxpayer expense.

HANNITY: Can you stop it?

BABIN: I’m working as hard as I can, Sean, to make sure that this this bill does come to the floor and get voted on. I can’t predict what the president will or will not do. All I know is I have a sworn duty my oath of office was to protect the citizens of the United States and our national security and that’s what I intend to do.

HANNITY: All right, good for you, Congressman, we will follow the issue closely. I don’t think we should take one. If they’re a risk arrest to American security, in our homeland security, we shouldn’t take one of them.

BABIN: I’m with you, thank you, Sean.