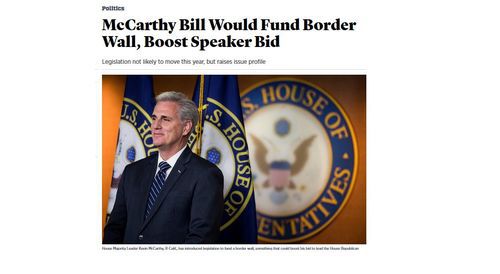 House Majority Leader Kevin McCarthy has finally done what Republican leaders should have done long ago: propose legislation to fully fund President Trump’s border wall. This allows the GOP to make immigration the key issue in next month’s mid-terms, exactly as VDARE.com has long urged, and marks another step in Trump’s takeover of the party. Of course McCarthy’s move is a symbol, but it’s our symbol and we should disregard quibbles about it. 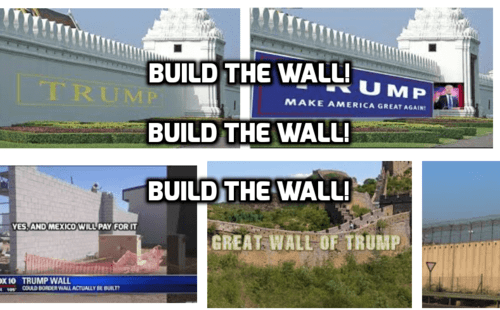 “Build the Wall” was undoubtedly Trump’s most popular promise on the campaign trail, yet he has failed to deliver on this pledge. Funding bills have come and gone, legislation has flopped, and bluffs have been called. The American people still have no wall construction on the border with Mexico, and Trump has no good explanation (other than to point to monies that are being expended on

Enter Kevin McCarthy, the very face of the Republican Establishment, to offer a life raft to the President’s agenda.

McCarthy announced last week that he plans to introduce a wall funding bill right before the November election. His Build the Wall, Enforce the Law Act would provide an additional $23.4 billion to wall funding over seven years and also includes strong immigration measures such as harsher sentences for illegal aliens caught reentering the country and cutting off funds for sanctuary cities.

Additionally, McCarthy’s bill sidesteps the debate surrounding the Deferred Action for Childhood Arrivals program by not including Amnesty for the program’s recipients. This is a great improvement. In March, the White House actually offered Democrats a deal to extend DACA protections to the fall of 2020 in exchange for $25 billion for wall funding. But Democrats rejected the offer, saying they would only consider such a measure if it gave a "pathway to citizenship" for 1.8 million illegal immigrants. [Border wall Dreamers deal implodes, by Burgess Everett, POLITICO, March 19, 2018]

McCarthy’s explanation for his remarkable step was so sensible that it might even be sincere: “President Trump’s election was a wakeup call to Washington. The American people want us to build the wall and enforce the law. Maintaining strong borders is one of the basic responsibilities of any nation. For too long, America has failed in this responsibility.”  [Exclusive— House Majority Leader Kevin McCarthy Introducing Bill to Fully Fund Border Wall, Making Midterm Immigration Referendum, by Matthew Boyle, Breitbart News, October 9, 2018]

There is no chance of this act passing before the midterms—the House is out of session until late November. But that doesn’t mean this isn’t good news for immigration patriots. GOP leadership taking up the cause of sensible immigration reform is a positive development, period. And it’s good politics for McCarthy.

The most obvious reason McCarthy proposed this bill: to fire up the base for midterms. McCarthy’s bill gives Trump and the Republicans something to campaign on in the absence of an actual wall. The base can be told, plausibly, that this bill will be a top agenda item—if the GOP keeps the House and gains seats in the Senate. So vote:

This is of course no substitute for the wall. But it at least shows Republican leadership have accepted it in principle—something that would never have happened under a Bush regime. If Trump wants to maintain the GOP majority, he better mention the bill at all future rallies.

McCarthy’s other primary reason for proposing the bill is more self-serving: he wants to be the next House Speaker. Significantly, he seems to have concluded that the best way to do that in the current political climate is to appear as the most Trumpian of choices.

McCarthy has done a surprisingly decent job at this presentation, reversing his old reputation as a less media-savvy Paul Ryan. Unlike the current House Speaker, McCarthy has shown total loyalty to the President and has even adopted Trumpist positions the party Establishment long detested. He has shown support for tariffs in spite of the Establishment’s free trade dogma. [Majority Leader McCarthy defends Trump tariffs, by Jacqueline Klimas, POLITICO, June 3, 2018.] He has been at the forefront of attacking Big Tech censorship in spite of the establishment’s fealty to corporate power. [Kevin McCarthy is trying to court the GOP base by bashing big tech, by Joe Perticone, Business Insider,  August 3, 2018]

He has even said diversity is not our strength—defying the Ruling Class diversity cult. “We did not survive, grow, and become the most powerful civilization in human history because we were focused on our diversity,” he said in a speech at the opening of a New Religious Liberty Division at the Department of Health and Human Services. [YouTube, January 18, 2018]

McCarthy’s wall proposal is just the latest sign that elements of the Congressional GOP are embracing Trumpism. Paul Ryan represents the old days of the party leadership that obsessed over unpopular entitlement reform and dreamed of Amnesty. McCarthy potentially represents a new leadership that fights for Middle America—not for the agenda of the Conservatism Inc. think-tank blob.

Not everyone is convinced by McCarthy’s new Trumpist act. Conservative Review’s Daniel Horowitz (an immigration patriot often praised by VDARE.com—see here, here, here) tore into the Majority Leader’s proposal in a histrionic column last week. Horowitz scolded McCarthy for failing to seize past opportunities to fund the border and derided the Republican’s latest effort as nothing more than pandering. According to Horowitz, the Majority Leader is only proposing this bill because of the threat of Jim Jordan, the other contender for the Speakership. [Grandstanding Kevin McCarthy has done NOTHING to stop the invasion over our border, by Daniel Horowitz, Conservative Review, October 11, 2018]

It is certainly true that Republicans have had several opportunities in the last two years to fund the wall, and not accomplished it. But to blame this all on Kevin McCarthy is surely mistaken. At the urging of Paul Ryan and many conservatives, Trump chose healthcare reform as his first legislative target instead of the wall. That turned out to be a massive failure that sidetracked the President’s entire agenda.

McCarthy has at least learned this lesson and made Trumpist objectives—such as the wall and tech censorship—his new priorities.

His rival, Jim Jordan, has not. [Jim Jordan Launches Campaign for Speaker of the House, by Sean Moran, Breitbart News, July 26, 2018] Jordan’s platform does include building the wall and merit-based immigration reform, but it’s not the top priority. Instead, Jordan seems to assume that Trump won on the Tea Party agenda circa 2012. Jordan’s top priority is repealing Obamacare—an idea that proved to be a catastrophe for Republicans in 2017. There’s no indication Republicans would have any success with this plan in 2019 and it would likely hurt Trump’s chances of winning re-election in 2020. Polling shows Republicans are losing the healthcare debate, badly, and they’re better off not trying to fight this battle again. [Poll: Voters of both parties largely support ObamaCare pre-existing condition protections, by Peter Sullivan, The Hill, September 14, 2018]

More importantly, this objective would derail the chances of pushing patriotic immigration reform in Congress as the GOP would squander political capital on another doomed legislative battle.

With McCarthy, there’s at least the potential that immigration would be the priority of the Republican majority following the midterms.

Don’t get me wrong—It is indeed truly heartening that both candidates for Speaker want to push patriotic immigration reform. But we should favor the one who will most likely accomplish it instead of frittering away critical political capital on unpopular proposals.

The GOP is changing under Trump’s leadership, and there’s no better testament to that than the Trumpian transformation of Kevin McCarthy.

Immigration patriots should accept him as a friend to the cause—we need the party Establishment on our side to get serious reform done.