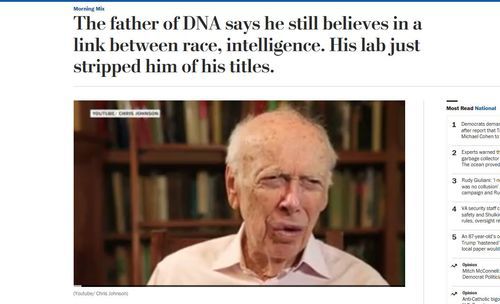 This has been the week of the weasels—unpleasant little rodents. cowardly when cornered but viciously vindictive when they think they have the advantage. Most recent victims: Nobel Laureate James Watson and immigration patriot Congressman Steve King (R.-IA). Plus, of course, truth, justice and the American Way.

Background: Two weeks ago I reported on the new PBS documentary Decoding Watson in the American Masters series. It aired on January 2nd. You can now watch it on the internet.

James Watson—with whom, I should say, I have some slight personal acquaintance—is the world-famous, Nobel-prize-sharing geneticist who in 1953 co-discovered the structure of DNA. He went on to run Cold Spring Harbor lab near where I live on Long Island. After forty years of that. the lab sidelined him in 2007 for remarks he made about Africa and about blacks in general:

All our social policies are based on the fact that their intelligence is the same as ours whereas all the testing says not really…There's a natural desire that all human beings should be equal [but] people who have to deal with black employees find this not true.

In this new PBS documentary Watson doubled down:

There's a difference on the average between blacks and whites on IQ tests. I would say the difference is, it's genetic.

Enter the weasels. Leading the weasel pack was science reporter Amy Harmon at the New York Times.[ James Watson Won’t Stop Talking About Race, January 1, 2019] Ms. Harmon had no difficulty bringing forth properly credentialed weasels to support her accusations of thoughtcrime against Watson: NIH Director Francis Collins [Email him]joined in with quite a blatant lie, as I noted in my piece two weeks ago.

Scientists like Collins, in prestigious and well-financed positions, learned the appropriate lesson from what happened to Watson in 2007. If you'll excuse my mixing up the animal metaphors and slightly modifying a Chinese idiom: "Kill a chicken to scare the weasels."

Watson was the chicken; the weasels, like Francis Collins, are duly scared.

Similarly scared are the weasels who run Cold Spring Harbor Lab. The lab's CEO and head weasel Bruce Stillman [Email him] and his deputy weasel Marilyn Simons, chair-weasel of the board of trustees, squealed that Watson's opinions were "unsubstantiated and reckless …reprehensible, unsupported by science … The Laboratory condemns the misuse of science to justify prejudice."[CSHL Press Release, January 11, 2019]

I'm not totally without sympathy for the Cold Spring Harbor suits here. It's all too easy to imagine the dreary hours they have to spend writing funding requests and negotiating with dimwitted government bureaucrats to keep their researches going. Offenses against government ideology must make that work harder.

None the less, there is or there should be a purity and clarity to scientific endeavor that occasionally needs to be preserved by standing courageously out in front of a howling mob and defending science, even if it means being dragged off to the stake for burning.

That's a lot to ask of average human beings, and perhaps most of us would fail the test. History does bring forth martyrs, though. Bruce Stillman is a credentialed scientist, a biochemist by training. He surely knows that James Watson's observations are reasonable.

The black-white IQ gap is one of the most stable and best-supported facts in the human sciences. Its causes aren't definitively known, but that they arise from the laws of population genetics is a perfectly plausible hypothesis.

That's what scientists do, bring forth plausible hypotheses for other scientists to test. Sometimes rigorous testing disproves the hypothesis, which is then discarded.

This has not yet happened with Watson's hypothesis because we don't understand enough of the underlying genetics. It's an open hypothesis—but a plausible one on circumstantial grounds.

This is science. Bruce Stillman, as a scientist, should understand it. If he doesn't, he's not fit to be head of a laboratory.

And just look at the shameful, shoddy, disgraceful spectacle here. James Watson is coming up to his 91st birthday. He's been in hospital following an automobile accident. And here are these administrative bureaucrats and hack journalists gleefully kicking him while he’s down.

A research project for some zoologist or neuroscientist: Are weasels capable of feeling shame?

I think I know the answer. At any rate, on the strength of this week's events, I can put forward a strong hypothesis.

In the Senate, at the same time, GOP Majority Leader Mitch McConnell told Rep. King to "find another line of work," while Mitt Romney told King he should resign his seat.

This all followed a single remark Steve King allegedly made in a January 10th interview with the New York Times:

Steve King insists that the last six words ("how did that language become offensive?") applied only to the previous two, "Western civilization." The way the New York Times punctuated it, though, it looked as if they covered "white nationalist" and "white supremacist" as well.

Incredibly, and significantly, it appears that no recording exists.

I have no patience with this kind of thing myself, but it's been enough to get Romney, McCarthy, and the other schoolmarms of the congressional GOP clutching their pearls and reaching for the smelling salts.

The NYT, flushed with its success at getting Rep. King stripped of his committee assignments and likely still fired up from its mugging of James Watson, piled on with: A Timeline of Steve King's Racist Remarks and Divisive Actions. [by Trip Gabriel, January 15, 2019]

This is a fascinating piece—a complete charge sheet of Steve King's thoughtcrimes. You could put it in a time capsule and bury it so archeologists of the future could acquaint themselves with the intellectual pathologies of our age … although you might save those archeologists some mental labor by translating it into Chinese first.

Some items from the charge sheet at random, with my comments interwoven.

Comment: Say what? Excuse my ignorance; I though English is the country's de facto official language. Wasn't the Constitution written in English? Aren't congressional debates conducted in English? Isn't the State of the Union address delivered in English?

And when immigration romantics—you know, the Ellis Island crowd who love to tell us how their great-grandfather landed with five dollars in his pocket and labored to become American—when those people are waxing sentimental, isn't one component of their waxing the bit about how great-grandpa struggled to master the English language?

Comment: Well, duh. Even setting aside the "dying civilization" bit, public funding of healthcare should not include items like contraception, which just manage the lifestyles of healthy people. The government may as well cover the cost of our toothpaste.

Comment: Which is exactly what multiculturalism is. What else is it? VDARE.com Editor Peter Brimelow's name there is (now) tagged by the NYT with a hyperlink to can you guess? Yes! the Southern Poverty Law Center mail-order racket.

Comment: A good proportion of Austrian adults in the 1950s had been members of the Nazi Party or one of its youth organizations. Should they all have been excluded from participation in politics? Wasn't our own Democratic Party the party of segregation in the 1950s, with a garnishing of Communist spies and fellow travelers?

Comment: From a strictly literary point of view I can't praise the novel, which I have never been able to finish. But concerning the psychological self-disarmament of Europeans against Third World invaders, Raspail was spot-on. Look at any day's news stories from Europe.

Comment: Austria's Freedom Party polled third in the most recent election, with 26 percent of the vote. They are a member of the coalition government currently running Austria. Le Pen's party in France is polling ahead of President Emmanuel Macron's, 21 percent to 19. Geert Wilders' party holds 20 seats of the 150 in the Dutch lower house, nine of the 75 seats in the upper house. Viktor Orbán's party is actually in charge of Hungary.

My point: These aren't lunatic-fringe factions. They are solid, well-established parties with firm bases of support. They are not led by weasels, either, as our own wretched GOP is. Geert Wilders has had numerous fatwas issued against him by Moslem clerics; he lives under 24-hour police protection.

Well, you can read the full charge sheet for yourselves. It's picayune stuff—nothing an honest patriot would be impressed by.

That time-servers like Mitch McConnell and Kevin McCarthy and skulking cowards like Mitt Romney should be trying to destroy a congressman's career at the urging of Leftist front organizations like the Anti-Defamation league and the SPLC tells you everything you need to know about the congressional GOP.

Yes, the Washington D.C. swamp of bureaucrats and lobbyists needs draining. While we're talking political hygiene, though, there's also a separate nest of weasels that needs cleaning out down there: the congressional Republican Party.

To say nothing of the New York Times and the Cold Spring Harbor Lab bureaucrats.