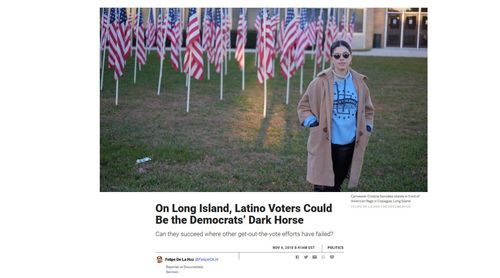 New York is a perfect example of the political transformation caused by a browning electorate. Long Island, which might be the part of the state that has been most impacted by the Democrats' demographic replacement policies was what enabled state Democrats to take over complete political control of the state government this past Tuesday.

Republicans not only lost, but they were blasted out of the Senate control in a turf they had long called home: Long Island. Changing demographics had weakened their once iron grip on Senate districts. Only a couple years ago, they still managed to occupy all nine Long Island Senate seats. They called themselves the “Long Island Nine.’’ After Tuesday’s results, they are the “Long Island Three," as Democrats picked up five seats in Nassau and one in Suffolk county.[Upstate loses sole Albany power base after Democratic Senate takeover, By Tom Precious, The Buffalo News, November 8, 2018]

The news might only casually mention the "changing demographic" aspect of the elections but the reality is that it was the key to the Democrats gaining power. The Democrats have been blatant in their efforts to weaponize the Hispanic vote in Long Island.

Efforts to activate Latino voters are now focused on: State Senate District 5, where longtime legislator Carl Marcellino is in a rematch against Democrat Jim Gaughran, whom he beat by about 1,500 votes in 2016, his closest race since first being elected to the State Senate in 1995; State Senate District 8, where Democratic Sen. John Brooks is defending his seat after defeating the incumbent GOP Sen. Michael Venditto by a mere 258 votes in 2016; and New York’s 2nd congressional District, where longtime GOP U.S. Congressman Rep. Peter King is facing a spirited challenge from outsider Democrat Liuba Grechen Shirley.

Both Nassau and Suffolk counties have had a growing Hispanic population in the last few years, together adding about 80,000 Hispanic or Latino residents between 2010 and 2016, according to data from the American Community Survey. The counties had about 230,000 native-born and naturalized U.S. citizens who spoke Spanish at home as of 2016, about nine percent of the total citizen population. Most of these people live in mixed-status households, where some family members are not U.S. citizens.

This population growth is apparent in the immediate surroundings of the Long Island Rail Road station at Copiague in Suffolk County. Businesses in the surrounding area display “Se habla español” signs, and Hispanic delis dot the streets. At around lunchtime on Sunday, a crowd of all Spanish speakers milled around a long counter where cooks were serving fried fish, quesadillas, and assorted Mexican and Latin American foods. Several cars driving down residential streets could be heard playing reggaeton.[On Long Island, Latino Voters Could Be the Democrats’ Dark Horse, by Felipe De La Hoz, Documentedny.com, November 6, 2018]

The New York State Republicans (NYGOP) seem completely unable or unwilling to combat this and are losing miserably as a result. The NYGOP has long been considered one of the most "centrist" Republican Parties in the nation or, to use the modern parlance, "cucked." James Buckley ,  brother of the founder of National Review, won a seat in the Senate, not on the Republican ticket, but on that of  the Conservative Party, a party created over 50 years ago to push the NYGOP further to the right with some limited success. But in the 2018 election against Governor Andrew Cuomo and the news constantly talking about an upcoming "Blue Wave," the NYGOP was hoping that they could run a cuckservative for governor who would lose gracefully to Cuomo (can you call losing by almost 24 points "graceful"?) and they would live to fight another day. In a similar way, one Republican congressional candidate in Rochester, Jim Maxwell, openly talked about how he opposed Trump's border wall and tried sounding like John Kasich on immigration but ended up being blown away by an embarrassing margin of almost 20 points.

He called the administration's now-revoked separation policy morally wrong, and said immigration is "a huge net positive for this country, always has been... The dummies stay home," he said. "The brave and the entrepreneurs are the ones that come." [Maxwell sets sights on veteran politician Morelle in race to succeed Slaughter, By Brian Sharp, Rochester Democrat and Chronicle, June 27, 2018]

To use Republican congressional candidate Maxwell's words for illegal immigrants, the "brave and the entrepreneurs" have been moving to Long Island for years now which is evidenced by the Island's awful problem with MS-13 which even Governor Cuomo has been forced to acknowledge.

Gov. Andrew Cuomo announced Monday the state will put another $20 million toward efforts to crack down on MS-13 and gang recruitment on Long Island. Cuomo announced his plan in Brentwood, a community at the center of the fight against MS-13 violence in the New York City suburbs... Cuomo says the funding is part of a broader effort to take on gangs like MS-13, which has been blamed for at least 25 killings across Long Island since January 2016. At a conference about MS-13 last week in Brentwood, officials said at least 8,600 children from Central America between the ages of 6 and 17 made their way to Long Island in the past four years. Many arrived without parents, and now schools, police and taxpayers are feeling the repercussions. Many are placed with relatives or sponsors in Brentwood, Central Islip and Hempstead, often feeling isolated at school and at home. [Cuomo Puts Another $20 Million Toward Fighting MS-13, Gangs On Long Island, CBS New York, October 29, 2018]

I guess the Democrats think you can't make an omelet without breaking a couple of eggs, and some gang violence and local disarray is the just the price to pay for gaining a strong political foothold on the Island. It was these new voters that helped the Democrats win total control on November 6 by sweeping the state senate.

“Albany has never seen this scale of turnover,” said Joe Dinkin, campaign director of the liberal Working Families Party that drove much of the Democratic effort. “The old ways of doing things are over.”

“The voters of New York State have spoken and they have elected a clear Democratic majority to the State Senate," she said, predicting Democrats could have as many as 40 seats in the 63-seat chamber. "While the results of some elections are still being determined, at least 32 Senate Democratic Conference members have already won election tonight. I am confident our majority will grow even larger after all results are counted, and we will finally give New Yorkers the progressive leadership they have been demanding.” [Big Long Island wins help Democrats take control of State Senate, By Michael Gormley, Newsday, November 7, 2018]

So what do these Democrats mean when they say "progressive leadership?" Let's ask Governor Cuomo.

When asked on Wednesday what he would like to see passed in the coming legislative session, the governor laid out a veritable Christmas list of progressive baubles, including codifying Roe v. Wade’s protections in state law; more gun control and ethics laws; the Dream Act, which would allow for financial aid for undocumented students; and the Child Victims Act, which would extend the statute of limitations for survivors of certain kinds of sexual abuse. [Democrats Finally Control the Power in Albany. What Will They Do With It?, By Jesse McKinley and Shane Goldmacher, The New York Times, November 7, 2018]

So there you have it! The new Democratic majority will give New York more abortion, gun control and free college tuition for illegal immigrants. And as anyone with half a brain can tell you, the free college tuition for illegals will only drive more illegal immigrants to the state further worsening the demographic situation for Republicans. But this is obviously what happens when you allow the opposition party to demographically replace your voters. Everything that the NYGOP has fought against for years is now going to quickly happen and they're completely powerless to stop it.