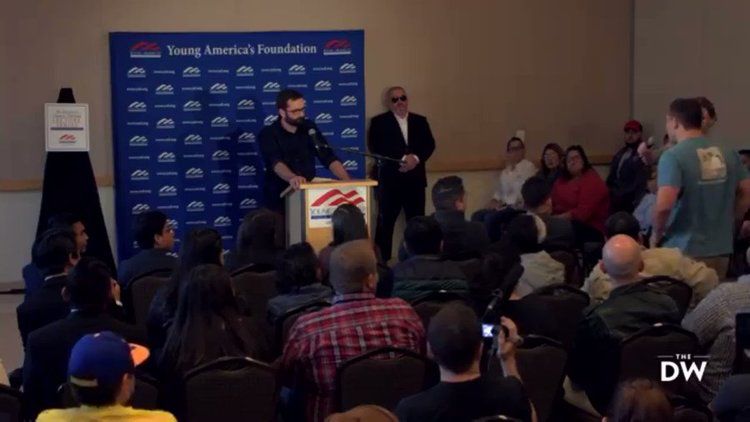 Above, Matt Walsh can't deal with a question about anti-white bias.

Conservatism Inc. grifters are on the defensive as passionate, educated, and brave young Christians, nationalists, and patriots are confronting them at their campus events. Charlie Kirk, Matt Walsh, Rep. Dan Crenshaw and others are being bombarded with questions about immigration and the double standards of identity politics. Conservatism Inc. is responding to this grassroots, spontaneous movement the same way it always does–with demands for censorship, purges, and centralized control. Yet the scam is exposed for all to see. New leaders are emerging, ready to transform the American Right into a force truly representing the Historic American Nation.

“Conservatism Inc.” is the parasitic network of nonprofits, phony activist organizations, and outright scam operations masquerading as a movement that I target in my new compilation Conservatism Inc: The Battle for the American Right. It’s mostly my VDARE.com columns but includes never-before published material that defines and analyzes how this controlled opposition works.

The most poisonous way it works: taking idealistic young campus conservatives and forcing them to parrot meaningless slogans about the glories of neoliberalism and big business. Such nonsense is irrelevant to the lived experience of young (and mostly white) campus conservatives, who are confronted with radical anti-white politics, corporate censorship, and the ruinous cost of family formation. Preaching about tax cuts for the rich and bragging about anti-racism is utterly hollow to these young Americans who see their country being dismantled.

Not surprisingly, Conservatism Inc. has a long tradition of purging those who want to ask intelligent questions about race, immigration, and the real nature of politics. As a direct result, “the movement” is filled with a combination of cynical con-artists possessed of a certain low cunning and outright fools who implode when they meet with serious opposition. Additionally, this “movement” has completely failed to reach young people because conservatism’s slogans are irrelevant to what we face. An astonishing 70 percent of millennials now say they would vote for an avowed socialist candidate [70% of millennials say they’d vote for a socialist. 5 facts about their debt-saddled economic situation tell you why, by Hillary Hoffower, Business Insider, November 1, 2019].

By any standard, Conservatism Inc. is an unfathomable failure.

Unless the point is to lose.

Which, of course, it is. Conservative Inc.’s purpose is to keep the American Right corralled and thwart a successful populist movement. Defeat is preferable to a success the bipartisan Establishment can’t control. Meanwhile, individuals within the “movement” personally profit while they manage the decline. By purging nationalists, Conservatism Inc. ensures there is no competition.

Thus, the Beltway Right operates in de facto partnership with antifa and journofa to make sure those with careers in Conservatism Inc. recycle the same stale talking points about tax cuts, Israel, “free markets,” and “anti-socialist” talking points that compare Norway to North Korea. Dissenters are purged if they even appear in a photograph with the wrong person [Ashley St. Clair and the Bankruptcy of Conservatism Inc., by Gregory Hood, American Renaissance, October 11, 2019].

Consider those who are promoted by Conservatism Inc. today—most notably Congressman Dan Crenshaw (TX-2), who is clearly being positioned as the next John McCain.

When asked about H.R. 1044, the Treason Lobby’s latest drive to dispossess Middle America by importing a Leftist Indian Overclass, Congressman Crenshaw complains about those who think whites will someday be a minority, calling it “nonsense” and saying “we aren’t identity politicians.”

He’s right of course–“identity politicians” win, which is why Texas will soon be a blue state, and “American” only in name.

Again, Crenshaw is simply not giving a serious answer. The last GOP Congressman from Occupied Houston, he’ll soon be displaced just like California Republicans were.

Crenshaw was asked his opinion of the “anti-white policy known as Affirmative Action.” Incredibly, he denied that it hurts whites and said that it’s anti-black. Needless to say, blacks don’t think so.

To take another example, listen to Matt Walsh at Young America’s Foundation/Young Americans for Freedom. He flatly denied that anti-white bias exists.

Not surprisingly, the Matt Walsh Q&A stream was reportedly set to private so no one could watch it.

But other brave students are asking questions at Conservatism Inc. events. This effort is spontaneous and decentralized. However, Nick Fuentes, the funny, charismatic, and Catholic host of the America First YouTube show, has become a de facto spokesperson for it. Which means he’s also Conservatism Inc.’s current target.

Since 2016, many of the figures who powered the populist movement that elected Donald Trump have been doxed, deplatformed, or cut off from financial support. James Allsup, who had half a million subscribers, recently lost his platform on YouTube (though he’s re-emerged at TheRightStuff). Now, they’re coming for Fuentes [Charlie Kirk has finally had it with these white nationalists in his movement, by Zachary Petizzo, The Daily Dot, November 5, 2019].

This person is Evil.

How is Holocaust denier @nickjfuentes still on Twitter and VERIFIED?? https://t.co/nDGfIYBlmo

Of course, Gorka himself has been accused of being in a “Nazi-linked” group and his mother was reportedly a translator for David Irving [Sebastian Gorka Made Nazi-Linked Vitezi Rend ‘Proud’ by Wearing Its Medal, by Alexander Smith and Vladimir Banic, NBC News, April 8, 2017]. (Gorka also briefly lost his own YouTube account for “copyright infringement” [YouTube bans former White House adviser Sebastian Gorka for copyright infringement, by Mike Brest, Washington Examiner, November 5, 2019]).

And here is the problem with Conservatism Inc. calling for deplatforming: All the same arguments can and will be made against them. Gorka is just one example of how conservatives find it impossible to respond to charges of “racism,” “sexism,” “homophobia,” or other made-up sins. They accept the Left’s premises and desperately throw potential allies in between them and the commissars, hoping to be eaten last. I would not be surprised if Gorka does end up denouncing his own mother.

Because of Conservatism Inc. cowardice, the Left has total control over the culture and even the American Right. It can dictate who is and is not allowed a job and a platform. It has absolute domination of American higher education. The fact that faux rightists like Walsh complain that “trolls” are upsetting conservative messaging on college campuses is self-discrediting. If Conservatism Inc. operated like one of those “private enterprises” it loves so much, its failure on campuses would ensure it was long since out of business.

Thanks to everyone who came to my speech tonight. Hopefully the trolls in the Q&A didn’t ruin anyone’s experience. It’s unfortunate that they’re trying to undermine years of work conservatives have done to have our message heard on college campuses, but they won’t succeed.

If conservatives want to win, they need to treat the right to free speech online as an “existential issue,” as an excellent American Mind piece recently observed [The Flight 93 Election Crashed, by Hunter Hearns, October 31, 2019]. It also needs to be a principled defense. Even if you don’t agree with Fuentes, or Allsup, or anyone else, they still have a right to be online and to use basic services.

Yet we know Conservatism Inc. won’t defend free speech—because if it did, it would lose its hold over its own constituency. Conservatism Inc. serves as useful controlled opposition for the Left but can’t withstand a sustained challenge from the nationalist Right. If America is to live, it must expel the Conservatism Inc. parasite.

The fact that students are independently organizing, executing, and promoting these de facto raids on Conservatism Inc. events is immensely encouraging. It’s also insanely brave, considering that journalists, Conservatism Inc. operatives, and antifa will all be gunning for them. This courage is inspirational.

And there are other reasons for cheer. The fact that even “mainstream” conservative publications are now using the Dissident Right term “Conservatism Inc.” is promising [The Downfall of Conservatism Inc., by Greg Jones, Human Events, November 4, 2019]. When the Establishment is trying to co-opt a term, it means that it is afraid. Conservatism’s sterile, economics-only orthodoxy failed to prevent America’s cultural and demographic collapse. We need a new movement, because America’s time is running out. These young patriots are showing the way forward. We should be proud and stand with them.