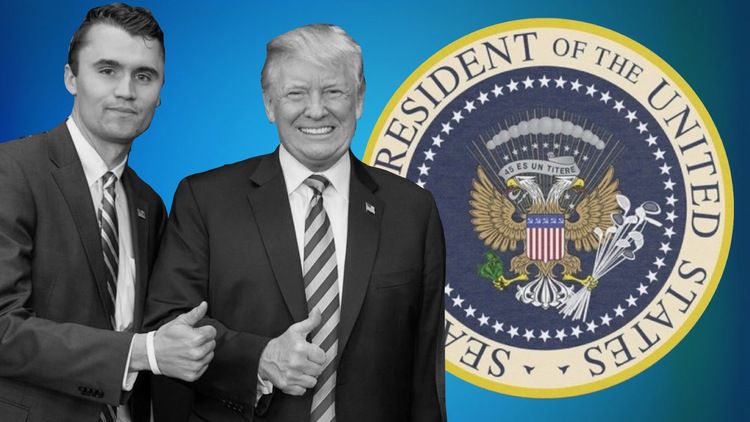 The Altered Presidential Seal And The Farce Of Turning Point USA

The whole point of the Donald Trump candidacy was that we thought we would be getting something different than what Conservatism Inc. usually offered. Unfortunately, as Steve Bannon noted, the “original sin” of the Trump Administration was giving the Establishment he had just defeated control of the White House. It wasn’t just giving the Beltway Right control over policy, but gelding the organic activist community that had developed and instead boosting lame “activist groups” that boost tax cuts for big business, deregulation, free trade, and other policies the Trump base simply doesn’t want.

Instead, astroturfed activist groups emerged to scoop up and redirect the energy. One of them is Turning Point USA. The group educates students on (sigh) “the importance of fiscal responsibility, limited government and free markets.” Basically, the same old dead end. Of course, because it is a youth group and often operating on college campuses, they don’t usually end up talking about tax cuts and deficits. They end up getting dragged into the culture wars, which inevitably leads to accusations of racism, sexism, and all the rest, even from fellow “conservatives” who think even TPUSA isn’t neutered enough. [Young conservatives should steer clear of Turning Point USA, by Jordan Lancaster, Red Alert Politics, July 25, 2019]

The main problem for TPUSA is that the ideology they are trying to push, of neoliberalism and “free markets,” is increasingly unpopular, even among conservatives. When Tucker Carlson spoke at a recent TPUSA conference, he attacked big business and Big Tech. When Charlie Kirk tried to keep the audience on the plantation by repeating the same old slogans, the audience laughed.

Tucker: “If you start with these inflexible theories you wind up where we are now in a country where a small number of people are taking all the spoils, and you guys are shafted.”

How does the organization try to keep young people who face radical multiculturalism on campus on board with tax cuts for corporations pushing leftist policies? The answer is by slavishly supporting President Trump. [Young Trump Fans Reveal The President’s Hold On Republican Party’s Future At Charlie Kirk-Founded Conference, by Bill Powell, Newsweek, July 24, 2019]

In some ways this is good, because when President Trump talks about nationalist trade policies, stopping immigration, or various politically incorrect topics, Charlie Kirk et al. are obliged to defend him. But it also means you don’t really have a serious movement. You have something more akin to a grifting operation, where you take potential grassroots energy and funnel it into foolish causes. Ultimately, this is the story of all of Conservatism Inc.

Two recent incidents make this clear. The first surrounds Ashley St. Clair, a young woman promoted by TPUSA. TPUSA has long condemned “identity politics,” though it hosts specific conferences for blacks, Jews, women, and Latinos. The group doesn’t encourage serious discussion of immigration. Miss St. Clair, a young woman with a somewhat checkered online past, recently discussed on video her scorn for those concerned about the demographic consequences of mass immigration. She even mocked her own organization.

In the same video, Miss St. Clair heaped further scorn on the president’s supporters: “They’re just screwing themselves over with this just ‘build the wall’ and this is all we care about.” Co-panelist Steeve Strange agreed. “It’s not going to happen,” he said. “The whites are having less kids, there’s essentially zero white immigration, the whites are eventually going to lose majority status in this country, inevitably.” In fairness, Mr. Strange was not saying this gleefully—just declaring an “inevitable” fact…

One panelist (Dylan Perentis, @realTFSD) suggested America should “completely close the borders and stop letting anybody in, legal or illegal.” “What’s wrong with legal immigration?” asked Miss St. Clair. She dismissed the idea that immigrants will assimilate, or that they should have to. She would be happy if they spoke English but suggested no way to force them to.  Steeve Strange admitted that countries such as Japan have an advantage because they are homogenous, but America was “multicultural from the start.” (He must not know about the 1790 Naturalization Act.)

Miss St. Clair mocked her own organization, suggesting it does nothing useful and exists only to “provoke people on campus.”  She contemptuously referred to “a bunch of white dudes with hard-ons” who attended a Turning Point USA event.

However, Miss St. Clair also made some good points. She noted that despite massive censorship and physical attacks on his supporters, the President has done very little for them. “Why are people still sticking their neck out all the time [for him]?” she asked. It’s a good question. Of course, it applies to her too. The answer is that if she and those like her didn’t shill for him, they wouldn’t have an audience, influence, fame, or money.

The second incident illustrates another problem with the organization. If you are building an organization with no real ideological core and no serious mission, you attract mediocrities. So you get this utter humiliation, which hurts the president.

Speaking on Tuesday at a student activist conference hosted by the conservative advocacy organization Turning Point USA, President Donald Trump walked onstage in front of a presidential seal that, upon closer examination, appears to have been altered to include symbols representing Russia and golf.

The Washington Post first reported on the altered seal. As Trump walked onstage to a cheering audience, two presidential seals flashed on screen. The seal directly behind Trump was the authentic presidential seal. One of the seals, however, was not like the others.

Upon closer examination, the seal on Trump's right includes a double-headed eagle, unlike the single head of the traditional presidential seal, and seems to resemble the Russian coat of arms. The seal has a complex history, notes the Victoria and Albert Museum, but one of the more common interpretations is that the two heads represent east and west, "an allegory sometimes for unity, and sometimes for absolute monarchy." It could be a reference to Trump's sometimes-controversial relationship with Russian President Vladimir Putin.

President Trump is, of course, not a Russian puppet—if he was, American foreign policy would probably make more sense. The man who created the seal is one of those “former Republicans” who really believe the Russia stuff. He said the person who put the graphic up is “either wildly incompetent or the best troll ever—either way, I love them.” [Man behind fake presidential seal is former Republican who opposes Trump, by Justin Wise, The Hill, July 25, 2019]

But of course, that’s the point. Both explanations are equally plausible. Like President Trump’s own administration, TPUSA is likely filled with people who don’t really believe in President Trump’s 2016 message and will turn on him the minute he stops being useful. Either that, or it’s filled with people who can’t even get the presidential seal right after an Internet search. Someone has already been fired after this embarrassment. [Turning Point USA Fired After Trump Speaks in Front of Doctored Presidential Seal, by Shira Feder, Daily Beast, July 25, 2019] But the larger embarrassment that is the Beltway Right will roll on and on, until demographic changes render the grift impossible.

We desperately need a new, true, nationalist movement. And time is running out. Help us build it.