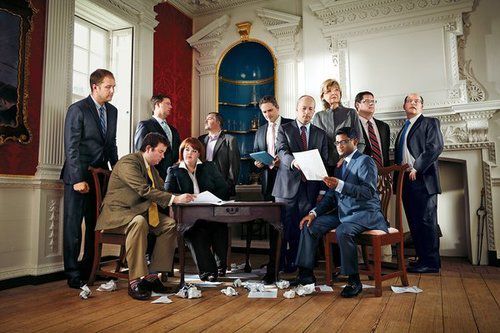 “Reform Conservatism” is the latest scam coming out of a Conservatism Inc. frantic to change the conversation away from the Camp of the Saints on the Southern border. Having failed to force an Amnesty/Immigration Surge down the throats of the conservative base after the 2012 election, some self-appointed leaders are now feigning interest in “middle class” voters, meaning those members of the historic American nation who stayed home rather than vote for Mitt Romney. But the “Reform Conservatives’” real object: securing their own (subordinate) place in the Ruling Class—epitomized by an adoring cover 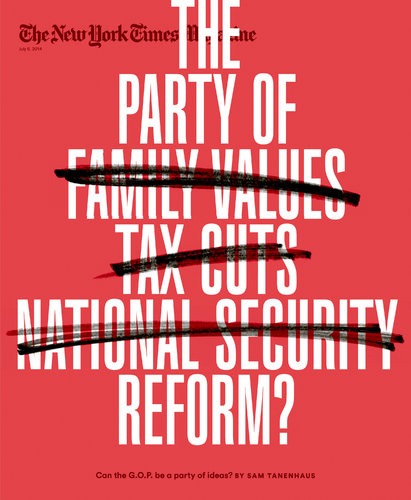 story (right) in the New York Times Magazine by long-time conservative-smearer Sam Tanenhaus [Can the G.O.P. Be a Party of Ideas?, July 2, 2014]. Fatally, neither the “Reform Conservatives” nor Tanenhaus’ article mention the dread word “immigration.”

Tanenhaus attacks a straw man of the “angry right,” who were apparently empty-headed barbarians until these “Reform Conservatives” led by Yuval Levin, “the son of Israeli immigrants,” and Ramesh Ponnuru, the son of Indian immigrants, came to enlighten them. Tanenhaus makes the usual drive-by slurs of “the presidential prospects of Sarah Palin and Michele Bachmann,” “Fox News hosts and Rush Limbaugh and the radio host Laura Ingraham,” and the “Tea Party aboil.” In contrast, the “temperate” Reform Conservative intellectuals are providing a kind of conservatism that the New York Times can be comfortable with. (Tanenhaus is careful to report that Levin and Ponnuru now tactfully suppress their opposition to abortion, homosexual marriage and even Obamacare).

“I think the Tea Party has been a very great good for the kind of change that needs to happen” Levin said. “It’s a source of great energy. It’s a reaction to the right kinds of problems. It didn’t arise with a policy mentality. A real grass-roots movement doesn’t, generally.”

Tanenhaus concludes: “Levin and company, who do have the policy mentality, will happily fill in the blanks.”

As service to VDARE.com readers, I have waded through the “Reform Conservatives’” new manifesto, Room to Grow (PDF). To look on the bright side: at least it identifies the middle class as the political center of gravity and notes that “two-thirds of Americans think it is harder to reach the American Dream today than it was for their parents.” “A rising cost of living amid stagnant wages,” rising education costs, rising work hours, and declining upward mobility should be directly addressed by conservatives instead of taking shelter in “broad abstractions about the economy.” Senator Jeff Sessions would agree.

But Sessions has a solution: cut immigration. The Reform Conservatives can only offer wonkery such as:

And the biggest factors in the collapse of the American middle class go completely unmentioned:

Tanenhaus’ omission of immigration appears to have raised some editorial eyebrows at the New York Times: asked about it by a shrewd in-house blogger, he said the “Reform Conservatives” simply disagree on the issue (which doesn’t explain why he didn’t report it). [Behind the Cover Story: Sam Tanenhaus on the G.O.P.’s New Intellectuals, by Rachel Nolan, July 7, 2014]. Token conservative columnist Ross Douthat (not one of the contributors, but something of a fellow-traveler) reported that “some of the authors in the Room to Grow manifesto support [comprehensive immigration reform a.k.a. Amnesty/ Immigration Surge] but that the “so-called reformers” are the most likely to resist the simplistic analysis which says that if the Republicans pass Amnesty, all will be well and they will win the Hispanic vote. [“Reform Conservatism” and Immigration, New York Times, June 23, 2014].

Because we’re going to have “Reform Conservatism” stuffed down our threat for some time to come, I decided it was worth examining the positions of the contributors individually. Unfortunately, the past statements of leading “Reform Conservatives” on the issue, where they even exist, are not particularly encouraging.

In fairness, Levin has admitted that mass immigration hurts working class Americans and has called for “assimilation”—though whether that is even possible with a Third World population is left unsaid [In Praise of Half Measures, by Yuval Levin, Weekly Standard, December 3, 2012]

Thus of all the contributors to Room to Grow, not one can really be characterized as an immigration patriot—a ludicrous position for those supposedly united by their distaste for simplistic pro-elite policies and concern for the working poor and middle class.

But it gets worse. More revealing even than the contributors are the public figures they trust to transform their proposals into policy.

Room to Grow is a product of the “Young Guns” network. As the manifesto proudly claims,

We know “Reform Conservatism” is a non-starter just because of this one sentence.

Each one of these politicos represents the critical flaws within Conservatism Inc. Cantor, of course, was so compromised by his pro-amnesty policies and reputation as a shameless flack for big business that he was crushed in the primary by a challenger running an anti-Amnesty and anti-Establishment campaign.

Kevin McCarthy abandoned his opposition to Amnesty not so much in response to an influx of Hispanics, but in order to provide cheap labor to agricultural interests in his district. The only good thing that can be said about him is that he’s so obviously a corporate shill that his mediocrity might lead the conservative base to look for alternatives.

As for Ryan, he’s an aggressive supporter of Amnesty whose idea of bold reform is to cut the one government program the GOP base uses. An almost perfect example of the Beltway Right’s combination of sociopathy and stupidity, he blunders about attacking his own base slashing the programs they support, working to lower their wages, and trying to replace them with immigrants.

Despite Ryan’s facepalm-inducing attempts at outreach by bragging about his “black sweetheart” in college and flowery tributes to Martin Luther King, he still manages to provoke charges of racism every time he tries to speak about blacks.

No wonder the country is in trouble—the Beltway Right’s leading statesman-intellectual may be the only man in the country capable of losing a debate to Joe Biden.

Worst of all, perhaps sensing that their Young Guns in the House have been firing blanks lately, “Reform Conservatives” are rallying around, of all people, Marco Rubio. Like Amnesty itself, Rubio will not stay buried. Recently, he gave an address at Hillsdale coverage that was hailed as ““Reform Conservatism” in one speech.” And if this is representative of the bold new conservatism, the GOP is in deep trouble.

Wages have stagnated; everyday costs have risen; industries that once flourished have dried up, their jobs shipped overseas or lost to automation; and millions go to sleep each night overcome with the sense that they are one bad break from financial ruin.

Instead, he gave a series of almost Talmudic mediations on the meaning of the “American Dream,” which “holds us together as one people” and “defines us as a special nation.” [Rubio Delivers Address on Middle Class Economic Challenges, Marco Rubio, Press Release, June 25, 2014] as their new champion. Unfortunately, after all the interminable rhetoric and lengthy human interest stories about hard working Americans down on their luck, the policies Rubio advanced to safeguard the “Dream” were painfully weak.

Naturally, this testament to mediocrity is being hailed by Reform Conservatives like Ponnuru as evidence that “another Republican politician—a very high-profile and ambitious one—is tying his political fortunes to these ideas.” [WTAS: Rubio the Reformer, Marco Rubio Senate Office, Press Release, June 27, 2014]

The conservative base is roiling with anger and looking for leader. Unfortunately, the Beltway Right systematically perverts its energy into misguided and self-defeating paths. When credible leaders do emerge (like Pat Buchanan) they are sabotaged by a Conservative Establishment more interested in remaining acceptable to the New York Times then taking and exercising power.

The result: conservative populism manifests itself in causes that are downright bizarre and open to exploitation by charlatans like Glenn Beck, Newt Gingrich or the black conservative flavor of the month. There is no patriotic leadership that effectively pursues the interests of conservative voters.

“Reform Conservatives,” by accepting the consensus narrative about immigration, race, or even trade policy, have nothing to say about the critical issues of our time.

Why we should listen to these people at all?: It’s precisely the warnings of the unrespectable populists like Pat Buchanan on issues like immigration and foreign policy that have been redeemed by history, while the Beltway Right intellectuals blunder from one fashionable catastrophe to another. And if the Beltway Right had listened to the warnings about mass immigration from people like Peter Brimelow and Ed Rubenstein (in National Review! Back in 1997!!), “Reform Conservatives” wouldn’t need to furrow their brows about ways to save the GOP from political extinction.

Today, it is the Dissident Right that is laying the groundwork for effective policy by applying the findings of human biodiversity, social dynamics, and even the political insights offered by the intellectual movement known as the Dark Enlightenment to the contemporary cultural and political scene. At its most basic level, helping the American middle class means discussing ideas about “Affordable Family Formation”—addressing issues like education, transportation, housing prices, wages, and the environment. You simply cannot speak intelligently on these issues if you are not willing to confront immigration and racial realities.

Unfortunately, as we learned with Jason Richwine, anytime serious research or innovative thinking threatens to penetrate the Beltway bubble, Conservatism Inc. moves to cut it away and remain in its state of proud ignorance.

But if reform conservatives can’t even bring themselves to identify the real problems, the entire effort is simply reshuffling the deck chairs on the Titanic. It remains for the patriotic Right to develop a National Conservative agenda that can actually put forward real policies that could be implemented by a GOP/ GAP that wants to win.

Of course, absent major foundation support and mainstream media connections, this is difficult to do and even more difficult to get people to take it seriously. But we don’t have an alternative.

The Beltway Right's house intellectuals are not up to the task. “Reform Conservatism” isn’t a solution—it’s just another Conservatism Inc. scam.