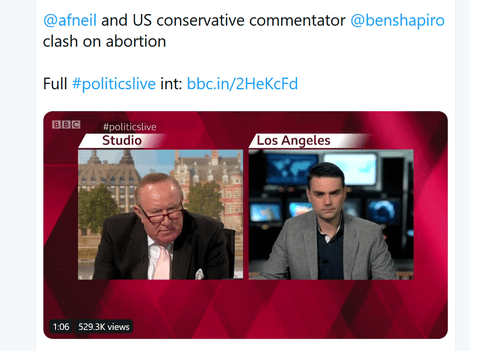 That Shapiro Meltdown: What It Says About Conservatism, Inc.—And Its Gatekeeper

Ben Shapiro got DESTROYED, as one of his own fanboy videos might put it—and as he has admitted [Conservative pundit Ben Shapiro admits he was ‘destroyed’ after cutting short TV debate, by Rob Picheta, CNN, May 13, 2019]. Shapiro surprisingly lost his cool and cut short a BBC interview with UK media Big Foot Andrew Neil.

Back in the U.S., the Left and the Dissident Right were equally delighted (see here and here). But there’s more to say about how this exposes Conservatism Inc.’s inherent flaws—and Shapiro’s. 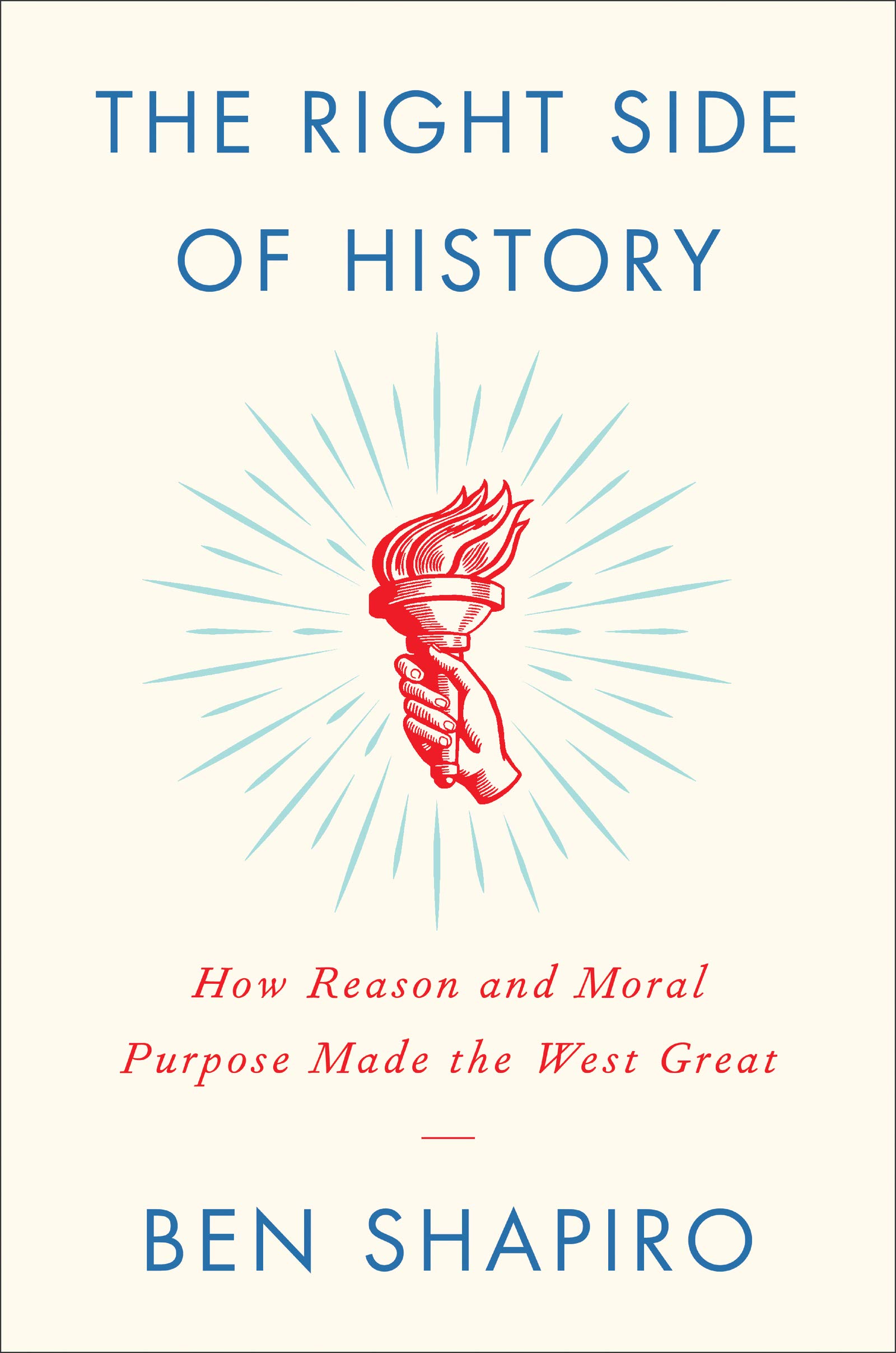 Shapiro was expecting to promote his new book The Right Side Of History: How Reason and Moral Purpose Made The West Great, the latest in the long series of Beltway Right slop defining the West and/or conservatism as post-Enlightenment prattle about “individualism” or “liberty” or “Judeo-Christianity” or anything other than a people (white, by the way) with a real culture and civilization.

In his book, Shapiro bemoans “division” and the supposed inability of people today to debate rationally (!!). He also proclaims his criticism of Trump—Shapiro was a Never-Trumper and ostentatiously split with Breitbart on the issue. Neil in the interview seemed unimpressed by this proof of Shapiro’s independence, perhaps because he is genuinely unaware of U.S. political nuance.

In other words, Shapiro expected to appear in his traditional American role as gatekeeper, eager to condemn populist nationalism and to portray himself as an “intellectual conservative.”

But Shapiro’s popularity, such as it is, depends on titillating a conservative audience. Like every would-be celeb in Conservatism Inc., he must simultaneously push and enforce boundaries. This inevitably leads to problems.

Thus, Neil hit Shapiro on a specific tweet he made in 2010—but has not been deleted—when he contrasted “Israelis” who like to “build” and “Arabs” who like to “bomb crap and live in open sewage.”

Israelis like to build. Arabs like to bomb crap and live in open sewage. This is not a difficult issue. #settlementsrock

Shapiro protested, accurately, that this was a tweet from 2010. He also protested, also accurately, that he had both apologized for and explained this tweet in an article on his website. [So, Here’s A Giant List Of All The Dumb Stuff I’ve Ever Done (Don’t Worry, I’ll Keep Updating It, Daily Wire, July 20, 2018]

In fairness to Shapiro, Neil was engaging in “Point and Sputter” journalism (essentially all journalism these days) in which a statement, often quite old, is taken out of context and sprung on a guest during an interview ostensibly about something else, followed by a display of faux outrage.

Yet Neil had a substantive reason for using this tactic and noting other statements Shapiro made in the past. The whole point of Shapiro’s book is to defend civil debate, but Shapiro’s schtick itself consists of baiting people.For example, one of Shapiro’s most “controversial” statements (at least on college campuses) is his classification of transgenderism as a “mental disorder”. [An interview with Ben Shapiro: Social justice, free speech, and transgender pronouns, by Philip Nieto, Los Angeles Loyolan, April 8, 2019]

Of course, homosexuality was characterized as a “mental illness” until 1973—a statement that today would be regarded as deeply offensive by most young people in Europe and North America.

Saying “race is real,” “homosexuality is a mental illness,” or “transgenderism is a mental disorder” can all be provocative or offensive statements at different times and places. But baiting transgenders is edgy on campus while safe (for now) within the general conservative movement.

But who knows? The dogmatic assertion that, all scientific evidence to contrary, “race doesn’t exist” may be regarded as equally offensive by future generations.

Right now, however, saying “race is real” is a career-ender for conservatives—very largely thanks to people like Shapiro. In the Loyolan above, Shapiro makes sure to virtue signal against “white supremacy,” the “alt-right” and the “evil” (Shapiro literally uses the term) Richard Spencer.

Shapiro claims to be part of the “Intellectual Dark Web” (IDW), which has emerged as sort of faux Dissident Right. And in a 2016 interview with one of its supposed members, Dave Rubin, Shapiro declared,

But what does that mean specifically? Though I’m trying to be fair to Shapiro, he would never be fair to, say, us.

In a piece implicitly approving of Darren Beattie’s firing, he casually called VDARE.com a “white supremacist site,” presenting absolutely no evidence why that label is deserved. [Conservatives oust bigotry, and the Left only slams them for it, National Review, August 28, 2018] In it, he termed the position that the United States should stay majority white as “white-nationalist nonsense.” (If this is true, then America really was founded as a white nationalist country.) He also explicitly endorsed the firing of John Derbyshire, and even said the Conservative Movement has not gone far enough in self-policing and is “making common cause with those they should have thrown out of the tent long ago.”

And this is where Andrew Neil really missed an important point. He accused Ben Shapiro of being part of the new media that capitalizes on extreme rhetoric. He also suggested that President Trump has essentially captured the conservative intellectual movement, something that Shapiro pushed back against.

However, both overlooked the crucial factor. Shapiro has a platform precisely because he is allowed to have a platform. He complains about campus protests and online abuse he suffered during the 2016 campaign, but I can confidently predict that Ben Shapiro will never lose his Stripe account, his PayPal account, his checking account. He will never lose his Twitter—while his critics (some undoubtedly abusive but definitely not all) mostly have.

He is “New Media” only insofar as he is promoted by Legacy Media, and because any competition to his right, including the grassroots activists who drove the 2015-2016 Trump insurgency, is being persecuted and purged by Big Tech. That’s the only reason why people need to be in “the tent” at all—to be allowed to earn a living.

Neil was right when he identified the lack of intellectual energy coming from the Beltway Right. Again, partially this is because most of the incisive critics have been deplatformed, cut off from financial resources, or simply intimidated via direct threats. Yet it’s also because the Beltway Conservative Movement is fundamentally a product of corporate donors. Not surprisingly, they aren’t coming up with anything except the usual calls for tax cuts and deregulation.

The ultimate proof of this: President Trump’s first year. He turned to the Beltway Right for an Obamacare replacement—and there was no plan, despite years of promises to the base. Yet, given how President Trump has essentially turned over judicial nominations to the Federalist Society, with the result that he is apparently succeeding in transforming the judiciary, if there had been an Obamacare replacement plan, it likely would have passed.

But Ben Shapiro has no stake in political success, no skin in the game. His job is to remain in the political sweet spot of triggering the hysterical campus left, while gatekeeping for the Beltway Right. This allows him Main Stream Media access, fundraising, and bookselling opportunities, while repeating the same tired slogans like it’s still the Reagan years.

He and those like him love to mock Leftists for staying in their safe spaces. But as we’ve now seen, once Shapiro is out of his Conservatism Inc. safe space, he really has nothing to say.