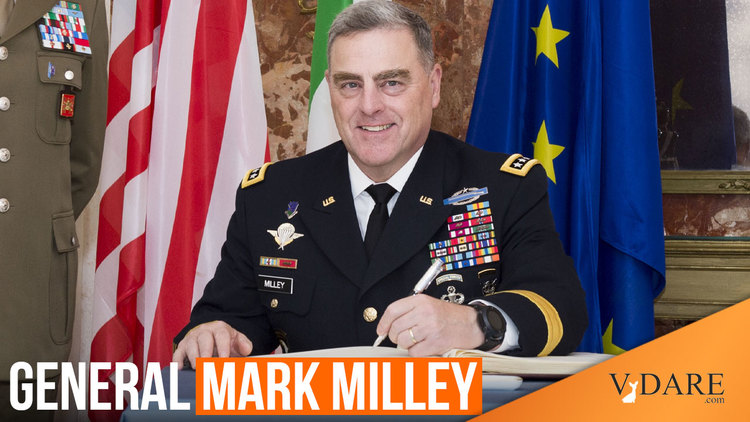 My Outrage Of (Last) Month was testimony given to the House Armed Services Committee by Lloyd Austin, who is U.S. Defense Secretary, and General Mark Milley, Chairman of the Joint Chiefs of Staff [CJCS]. The hearing was on the Defense Department's budget request for fiscal 2022, which starts October 1st. The fun of the thing, though, was the questioning of Secretary Austin and General Milley about the promotion of Critical Race Theory in our armed forces.

Rep. Matt Gaetz wanted to know what was going on with that. He particularly wanted to know the purpose of a recent seminar on "Understanding Whiteness and White Rage," held at the U.S. Military Academy, West Point.

Rep. Gaetz concentrated his fire on the Defense Secretary, who shucked and jived successfully until Gaetz' time ran out.

At that point Chrissy Houlihan, a congressperson from Pennsylvania—a Woke Democrat—stepped up and yielded her time to General Milley, urging him to comment on Critical Race Theory in the military—positively, I'm sure she was hoping.

Thoroughly Postmodern Milley did not disappoint her:

First of all, on the issue of critical race theory, et cetera, I'll obviously have to get much smarter on whatever the theory is, but I do think it's important, actually, for those of us in uniform to be open-minded and be widely read.

So what is it that cause thousands of people to assault this building and try to overturn the Constitution of the United States of America? What caused that? I want to find that out. I want to maintain an open mind here, and I do want to analyze it.

I've read Mao Tse-tung. I've read Karl Marx. I've read Lenin. That doesn't make me a communist. So what is wrong with understanding, having some situational understanding about the country for which we are here to defend?

And I personally find it offensive that we are accusing the United States military—our general officers, our commissioned, non-commissioned officers—of being quote Woke or something else because we're studying some theories that are out there.

That was started at Harvard Law School years ago. And it proposed that there were laws in the United States, antebellum laws prior to the Civil War that led to a power differential with African-Americans that were three quarters of a human being when this country was formed.

And then we had a Civil War and Emancipation Proclamation to change it. And we brought it up to the Civil Rights Act of 1964. It took another a hundred years to change that.

So look, I do want to know, and I respect your service. And you and I are both Green Berets, [He’s addressing ex-Green Beret  Mike Waltz, R-Florida] but I want to know, and it matters to our military and the discipline and cohesion of this military. And I thank you for the opportunity to make a comment on that. [Links added]

Where does one start with that? Well, perhaps with General Milley's uncritical parroting of Regime propaganda.

And for a guy stuffed up to the nose-holes with academic qualifications—Princeton, Columbia, the Naval War College, a Bachelor's degree and two Master's—Milley seems shaky on the Constitution he claims to be defending. Article I Section 2 has a slave as three-fifths of a person for enumeration purposes, not three-quarters. Even a Limey knows that.

The General tells us he's read Mao Tse-tung, Karl Marx, and Lenin, I guess because he wants to understand what those big old communist ideologies were all about. Now, he says, to understand “White Rage”, he's reading Critical Race Theory and he's happy that West Point is holding seminars in it.

That makes no sense, General. If you read Mao, Marx and Lenin to understand communism, why not read white advocates to understand “White Rage”?

Why not read Madison Grant or Sam Francis? Why not give the troops Jared Taylor to read, or Wilmot Robertson, or Guillaume Faye, Michael Levin, Philippe Rushton, Walker Connor, Colin Flaherty, Jim Goad, …

And I was just clearing my throat there. I could give you a booklist four times that long, General, if you really want one…which of course you really don't.

If you genuinely wanted to get acquainted with White Advocacy, you'd read the white advocates, not their enemies. You didn't read Joe McCarthy's speeches when you were trying to understand communism, did you?

What's the matter: you're afraid that reading heresies like White Advocacy might corrupt you? But didn't you tell us you read Mao, Marx, and Lenin without peril to your soul?

Be honest, General. You're not interested in understanding “White Rage”. You're interested in going on being what you have chosen to be: a fawning lackey of our corrupt, anti-American ruling class and a conduit to our armed forces for the dumb, crazy, illiterate and innumerate Ruling Class ideology.

Beyond that, you're interested in retiring at some point in the near future and taking up a directorship on the board of some Woke corporation.

They'll be fighting over you, General! To have an ex-Chairman of the Joint Chiefs on the board—hoo-eee! That'll look great on the annual report! And this one doesn't have a blemish on his record, military or political. He holds all the right opinions!

But I'm just telling you things you know, General, aren't I? Things you've figured out long since.

With all those degrees you have, General, and all that acquaintance with the classics of Marxism, you should be able to see the parallels with Critical Race Theory. Both are non-falsifiable; both just turn criticism right back on the critic.

You don't believe in the Interpenetration of Opposites? That, a Marxist will tell you, is because your own bourgeois class consciousness prevents you from believing it.

Critical Race Theory's the same. You don't think you are racist? It's your own White Fragility that blocks your awareness, you racist, you!

We've been here before, General, and no doubt we'll be here again. Crank pseudosciences, justified with hundreds of pages of gibberish, all in pursuit of money or power, usually power. Karl Popper explained it all. There you go: another author for your reading list.

So—a senior military man stuffed with academic credentials, proud of the breadth of his reading, although it seems not to have sunk in very deep. What does that remind us of?

The Pirates of Penzance!

[Clip:  Opening 15 seconds of "Modern Major-General” from The Pirates of Penzance …]

No, hold on here, the lyrics need updating.

I'm going to have to do this a cappella, I'm afraid. If you don't know what a cappella means, well, that's your own benighted fault for not having read my novel Fire from the Sun.

I'm going to have to fake the chorus, too. I would have hired one, but the boss said I'm already over budget for this year.

I am the very model of a Woke postmodern General,
With interests extending to the deeply intellectual.
I'm well read in philosophy, both social and political —
In Marx and Mao and Lenin and—yes!—racial theory critical.
I'm very keen to understand the origins of white folks' rage.
With Kendi and DiAngelo I've ordered all ranks to engage.
By scrutiny and eavesdropping we'll purge extremists from the force:
All fans of Trump, all MAGA hats … no BLM of course.

Though very good at keeping up with all things theoretical
I'm careful not to cast my eye on anything heretical.
In short, in CRT and all that's trendy and ephemeral
I am the very model of a Woke postmodern General.

Chorus:  In short, in CRT and all that's trendy and ephemeral
He is the very model of a Woke postmodern General.

I am the very model of a Woke postmodern General.
My incantations critical and racial I think memorable.
I know my country's evil, plagued by racism that's systemical
For which the cure can only come from studies academical.
My highest goal for every branch, as if at university,
Is piling on of equity, inclusion and diversity—
Except in thought, where someone has to separate the wheat and chaff …

How lucky that I'm serving as the Chairman of the Chiefs of Staff!

So as you see, I'm up-to-date on all that is acceptable.
For company directorships I'm perfectly electable!
In short, in CRT and all that's trendy and ephemeral
I am the very model of a Woke postmodern General.

Chorus:  In short, in CRT and all that's trendy and ephemeral
He is the very model of a Woke postmodern General.